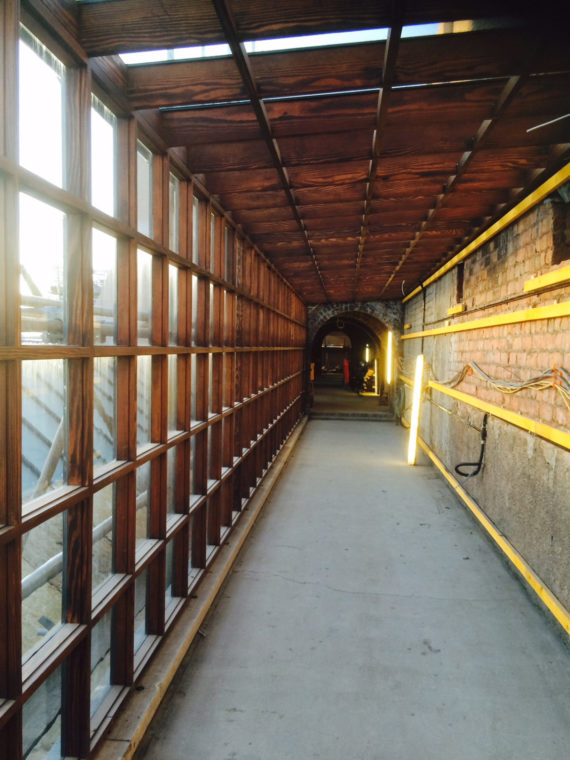 Iconic ‘hen run’ corridor in Glasgow School of Art is reconstructed after fire The glass-walled, timber-framed ‘hen run’, which connects two parts of the Mackintosh Building, has been reconstructed, nearly four years after its destruction in the Glasgow School of Art fire. The last 12 months has seen major reconstruction on the site take place, including a new roof, and 2018 will see the interiors fitted out and decorated, with contractors Kier working down the building from the roof to the basement.

The ceiling of the famous Mackintosh Library has now been put in place, and from March the interior of the library will be restored. The whole building will return to use in 2019. 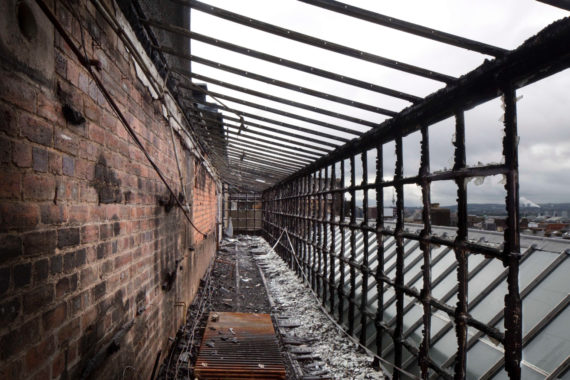 Previously, forensic archaeologists had revealed what was lost in the devastating blaze. About 8,000 books and journals were destroyed, including some from the school’s rare book collection. Also lost in the fire were around 90 oil paintings including two by Mackintosh, and all the items of furniture stored in the studio above the library – 97 in total.

Last year, artists including Sir Antony Gormley, Martin Boyce, Cornelia Parker and Douglas Gordon created new works utilising debris from the fire for an auction at Christie’s London. The sales helped raise funds for the restoration of the building.

Matt Hancock made culture secretary in cabinet reshuffle, replacing Karen Bradley Hancock, who is the MP for West Suffolk, was previously minister of state for digital, responsible for broadband, broadcasting, creative industries, cyber and the tech industry. He only took up that position in July 2016. However, now he will replace Karen Bradley, who has become Northern Ireland secretary in prime minister Theresa May’s reshuffle.

Writing on Twitter, Hancock said he was “thrilled” to become culture secretary, adding: “Such an exciting agenda, so much to do and great people. Can’t wait to get stuck in.”

Arup to transform Sheffield council block into £21m heritage venue The Sheffield-based firm will turn the former council estate’s Duke Street block, originally opened in 1961, into Park Hill Art Space. The 13-storey structure will include live-work flats and studios for artists, a research institute, an archive, shop, café and a permanent home for the artist-led charity, S1 Artspace, designed by architect Carmody Groarke.

S1 Artspace has previously claimed the development will make it ‘one of the largest galleries dedicated to contemporary arts in the North of England’. Speaking in 2016, Louise Hutchinson, S1 Artspace artistic director, said of the move to Park Hill: “This is the first major step towards realising our ambition and we very much look forward to the journey ahead.”

I met Kynaston soon after Raj started at MoMA, and somehow we got along and became friends. As he was packing up for retirement I visited him one day and took some portraits … sometime after, I was told by someone at the museum I had done something terrible. As I am wondering what that could have been, they jokingly added ‘you showed us that Kynaston could smile’. I reckon he was both a legendary curator and tough cookie, having made his way from the Caribbean to the forefront of the international art world. (He was also the only curator of color at MoMA for many years.) . This morning Kynaston passed away. Just a few days ago at the hospice, we saw this same twinkle in his eyes – and that is how we’ll remember him. Godspeed, friend! #kynastonmcshine . . . . . . . . . . . . . . #nyc #portrait #moma #museumofmodernart #art #artnews #curator #restinpower

Kynaston McShine, curator of historic exhibition ‘Primary Structures’, dies The former curator at large of the Museum of Modern Art (MoMA) and curator of painting and sculpture at the Jewish Museum, has passed away. He was 82.

McShine was well known for his extensive work at MoMA and his 1966 exhibition at the Jewish Museum, ‘Primary Structures’. The show was significant for not only being the first museum survey of minimalist art, but also for helping to solidify the term itself. It included work by some of the heavyweight names of the period, including: Judy Chicago (then Judy Gerowitz), Ann Truitt, Sol LeWitt, Ellsworth Kelly, and Dan Flavin.

Tours organised by Christoph Büchel of Trump’s border wall prototypes prove popular The Swiss-Icelandic artist is organising tours of the slabs of concrete and razor wire, built at a cost of $3.3m in federal funds and unveiled in October. Tickets, which cost $20 each and are sold out for the next tour on 13 January, cover transportation, ‘professional guidance’ in English and Spanish, and refreshments, according to the website for Büchel’s strictly non-profit project. The artist is also petitioning to have the prototypes declared a national monument.

Artists sign letter in support of Lorde’s decision to cancel gig in Israel Shepard Fairey, John Keane, Peter Kennard and Emily Young are among 100 cultural figures who have backed the singer after she was branded an anti-semitic bigot in a full-page advert in the Washington Post. The New Zealand musician had been due to perform in Tel Aviv on 5 June, but decided to pull out on Christmas Eve after criticism from activists in the Boycott, Divestment, Sanctions (BDS) movement, which campaigns for Palestinians’ rights.

‘Institutional’ male bias in government’s art collection, says Labour Research by the party showed that about three-quarters of works acquired in recent years were created by men. Figures from the shadow culture team suggest that around 265 works by men and just 80 by women were collected over the last five years for which data is available, between 2011-2012 and 2015-2016. This includes work by high-profile artists such as Damien Hirst, Tracey Emin and Gillian Wearing, as well as a many lesser-known names.