Bristol Biennial: What now, what next? - a-n The Artists Information Company 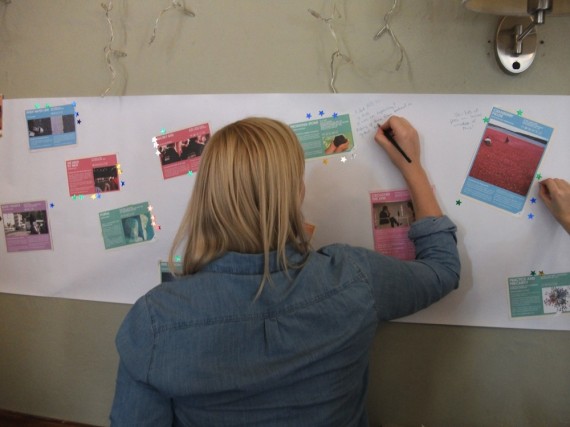 In keeping with the spirit of this year’s artist-led Bristol Biennial, on Sunday 28 September the city’s nomadic Hand in Glove project followed the 10-day festival with a special Interplay event exploring the question: What now, what next?

While previous Interplays have featured live art, installations, film and – in the case of 2013’s Tenterplay – camping, this sixth edition was a more modest and focused affair.

What now, what next? saw Hand in Glove partner with the Biennial, using the occasion as an intelligence gathering exercise. Over two hours, the idea was to digest and evaluate the festival and kick-start the process of driving it forward for 2016.

Biennial volunteers and attendees were invited to share their experiences over tea and cake. After the requisite ice-breaker games, the group split into break-out sessions to get to the nitty-gritty of three main questions: How can Bristol Biennial address the needs of artists? What does an artist-led biennial do for audiences? And finally, what is the Biennial’s place within the Bristol and South West arts ecology?

In a departure for Interplay, whose previous events have been appropriately celebratory, an open and honest approach was encouraged and criticisms were valued as much as praise. It was a genuine attempt to garner people’s responses, taking the rough with the smooth in order to inform what the Bristol Biennial does next – both organisationally and with the programme.

Regrouping to share our findings, there was then a final facilitated conversation, with topics ranging from building stronger strategic partnerships to the politics of electing a future steering committee or board. Also discussed was the continued controversy surrounding the use of the word ‘biennial’ and whether forefronting and strengthening this aspect of the project could better communicate its grassroots ethos.

Of course, many of the issues that arose from the event’s discussions stem from a lack of funding that inevitably thwarts ambition and limits capacity. While it is important that the Biennial retains its identity and avoids institutionalisation, it is equally important to recognise that things cost money; the longevity of the project requires it to become sustainable with paid key roles, through increased public investment from funding bodies and local authorities.

The artist-led sphere is the fertile ground where genuine risks are taken and most of the opportunities accessible to emerging and mid-career artists are produced. That is why increased funding for these activities is crucial for the health of the whole ecology.

Hand in Glove is already planning the next Interplay for 2015, promising an event akin to its 2012 edition, with more on artists’ survival, collaboration, showcasing, sharing and networking. handinglove.org.uk