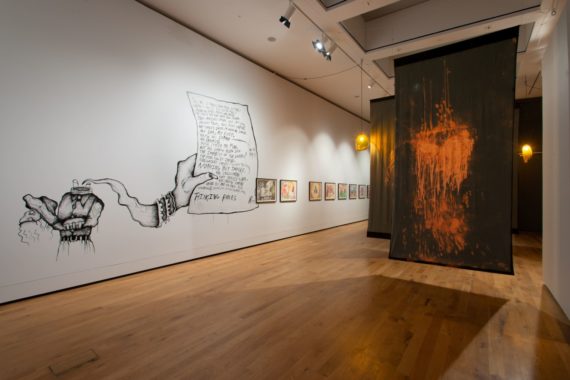 This month the British Art Show returns for its ninth edition. Curated by Irene Aristizábal and Hammad Nasar, the show explores the themes of healing, care and reparative history; tactics for togetherness; and imagining new futures.

Taking place every five years, the British Art Show is Hayward Gallery Touring’s landmark exhibition, having first begun in 1979. Opening at Aberdeen Art Gallery, it will then tour to several venues in the cities of Wolverhampton, Manchester and Plymouth.

The exhibition was shaped after meeting with over 230 artists in 23 cities in the UK and beyond. Responding to this complex time, the 47 artists in British Art Show 9 address ‘how we live with and give voice to difference, while also extending our understanding of identity to beyond the human’. The exhibition will change and adapt for each of its four host cities, presenting different combinations of artists and artworks that respond to their distinctive local contexts

Here we take a look at the work of six a-n members selected for the show. 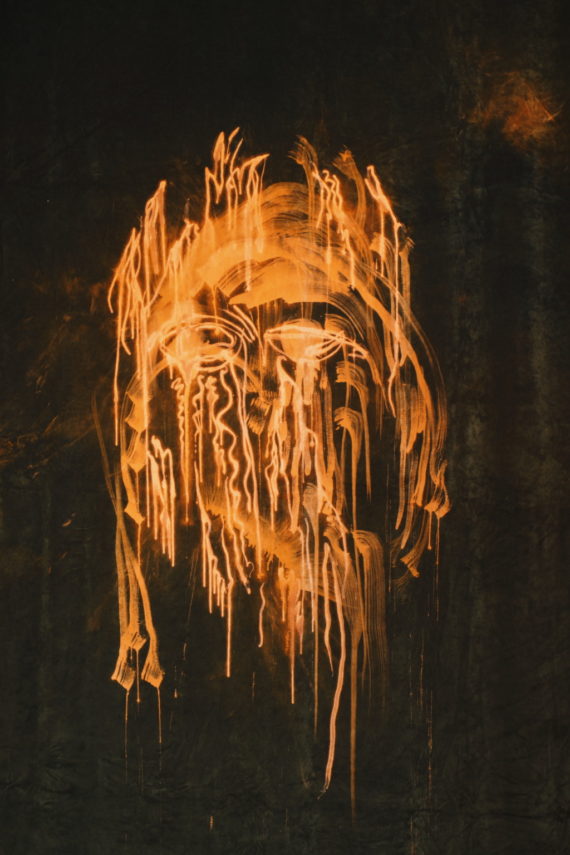 Paul Maheke’s highly charged performances, drawings and installations investigate how the past informs the present. Although his art often emerges from scholarly research, it develops intuitively. He is interested in producing emotional, innate responses from his audience, too.

Presented as part of British Art Show 9 in Aberdeen, his installation We took a sip from the devil’s cup features hand-blown glass lamps, a reference to amber – ‘a receptacle for history’ – and ghostly fabric ‘drawings’ inspired by tasseography, a divination practice that involves reading tea leaves or coffee grounds.

Commenting on the work, Maheke says: “It consists of a series of seven drawings bleached into fabrics, accompanied by three hand-blown glass lamps. The otherworldly faces in the drawings are loosely based on a tasseography session—a divinatory reading of patterns in coffee sediment—I took part in during a residency in Lithuania. It reflects my long term interest in the esoteric and its relation to non-Western forms of knowledge production, which urge us to engage with different ways of understanding the world around us. My work is very much about what’s absent, what’s left untold, what’s left unseen.” 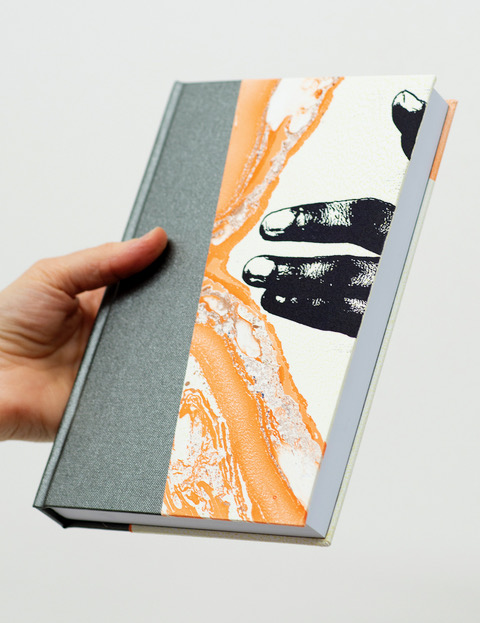 Abigail Reynolds’s art embraces sculpture, collage, print, moving image and performance, and much of her work is inspired by a deep love of books and libraries. Defining a library as ‘a compendium of knowledge, a group identity,’ she sees it as a place where time collapses. In 2016 she took a five-month journey along the ancient Silk Road, from China to Italy, in search of lost libraries, the casualties of natural catastrophes, political conflict, and war. When Words are Forgotten – a ‘library of glass’ – was originally created in response to that experience.

During British Art Show 9, Reynolds will develop Elliptical Reading, a project with and for local libraries and readers; a regular reading hour in a library for nine readers to share short sections from their favourite books, generating between them an unruly text or word collage which builds over time. Images of the readers’ hands are embossed on new bindings for their chosen volumes, replacing the title.

Library visitors can find books which have been chosen by local readers, re-bound by the artist, and re-shelved by the readers in new places outside their usual categories. An insight into the reader’s choice is included on a bookmark in each book. Further, the work directly embraces the architecture of the library as the artist will make a frieze of the readers hands passing books across the windows. 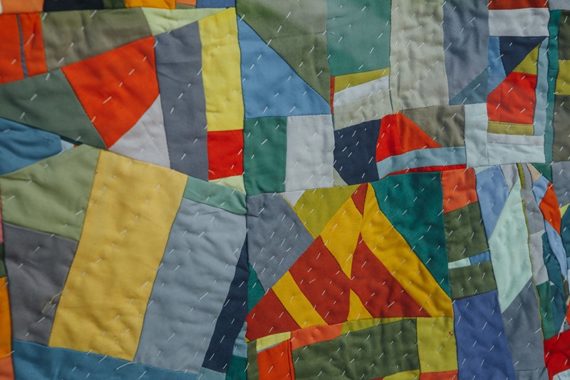 Katie Schwab is a maker with a special interest in early-mid twentieth-century design and craft produced by women. Her own practice is emphatically hands-on, collaborative and participatory and has involved aspects of communal living and collective production. For A Working Building, she produced films, wallpaper, tiles, murals, tufted rugs, and textiles.

Collectively, the works that make up A Working Building take a critical look at both the Cryséde factory in St Ives – which produced brilliantly coloured and patterned silks in the 1920s and 30s – and the optimistic art and architecture of Plymouth’s post-war Civic Centre. Developed through a process of facilitating workshops and interviews, undertaking tuition, partaking in tours and looking through archival records, oral histories and sample books, her works document knowledge and skills that have been shared between artist, students, museum staff, technicians and local residents.

Through observations and reflections on materials, spaces and designs, this exhibition considers ideas around shared production, craft and industry while also exploring social and cultural histories of women’s work, colonialism and migration in Devon and Cornwall. Named after the ribbons and cords used to prevent fabric from unravelling, her new work, small wares, focuses on the repair and restoration of textiles and architecture in Middelburg, the Netherlands. 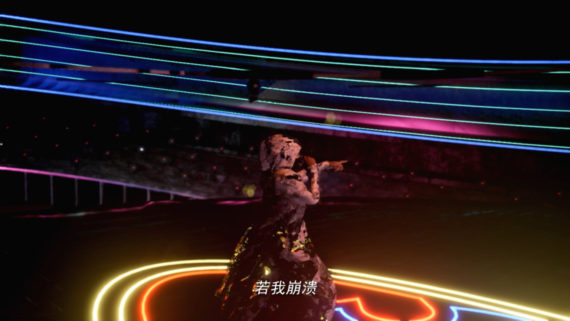 Lawrence Lek creates existential science fiction where pop stars plagiarise themselves, adolescent AIs search for freedom, and humanity fears its own obsolescence. A simulation artist with a background in architecture and electronic music, Lek’s work considers technology’s impact on society. Interested in the way in which computer-generated images affect our experience of physical space, he creates site-specific virtual worlds using 3D rendering and gaming software.

For BAS9 in Aberdeen he is showing AIDOL, a CGI musical fantasy which explores a future scenario of human-machine collaboration and conflict. Lek comments: “The film is set in the Malaysian jungle in the year 2065, it blends together the visual language of science fiction, video games ‘eSports’ competitions, and music videos. The story revolves around Diva, a fading superstar who enlists the help of an AI songwriter to help her stage a comeback performance for the eSports Olympics, a worldwide video game competition between AI and humans.

“When I was making it, I was researching new startups that were using machine learning to produce copyright-free music, and thought about how this would affect the way music was produced in the future, with all the problems about automation and labour that go with it. So in the film — which is literally about the process of making an album — I wanted to talk about music as both a field of creative expression but also as an economic product that gets shaped by geopolitical forces around it. The hope is that new kinds of hybridity are possible.” 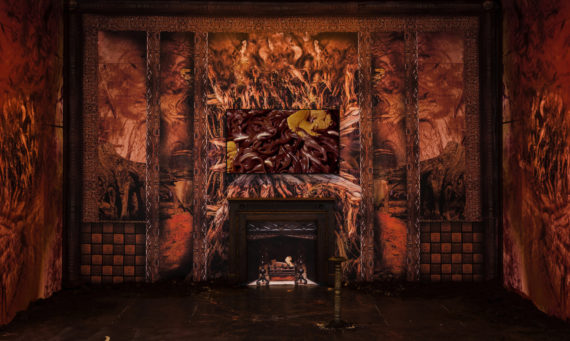 Fuelled by dialogue and collaborations with researchers and scientists, Joey Holder’s art is concerned with a sense that ‘everything has become a branch of computer science.’ Her complex immersive installations question this new world, where everything, including our own bodies, is probed, imaged, modelled and mapped.

Holder’s video installation Semelparous is a monument to the European Eel; a species that undertakes a single reproductive episode before death. The eels adopt a generative strategy, unique to ‘semelparous’ species, in which the organism inputs all available resources into maximising reproduction at the expense of its future survival.

Holder comments: “Within my work I reflect on how the natural world remains non-totalizable, and I try to represent the complexities of the relations of life forms and their limiting human categorisation. ‘Nature’ is a contested term. For me it is a term which includes the whole environment, humans, animals, plants, there is no inside and outside of nature. We are alive because of our interrelations with other species, our environment. My work observes a mutating reality, and deals with complexity to avoid simple identification and comforting classification.” 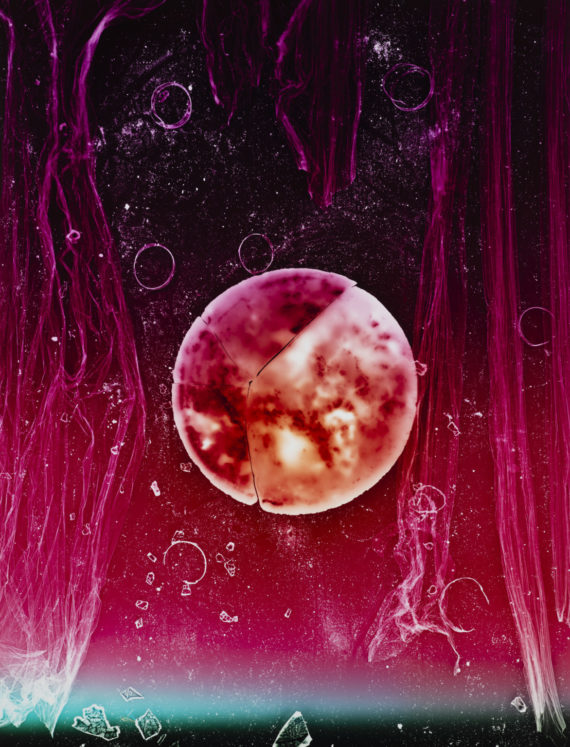 Anne Hardy’s walk-in sculptural installations – which she calls FIELDworks – combine physical materials with light and sound to create immersive, sensory environments that are both convincing and fragile. She regards these installations as sentient spaces; environments that can be temporarily inhabited but have lives of their own, altering and changing regardless of visitors or time.

Imagining the city as a sea in constant flux, with tides and backwaters akin to our unconscious, she creates alternative versions of our everyday world using materials and objects, sounds and other intangible things that she finds in places which she describes as ‘pockets of wild space … where loose-ends, feelings and thoughts collect.’

For British Art Show 9 in Aberdeen, Hardy is showing eight unique photograms made over the last year, which are part of a series The Depth of Darkness, the Return of The Light. Commenting on the work, Hardy says: “I imagine the photograms as feelings or states, like remnants of touches and gestures at intimate or massive scales. I want them to suggest spaces where we become aware of our own presence, because of the ambiguous or shifting scale between micro detail and infinite space. This state of hovering is about creating or finding a ‘gap’ that sits between two states: between representation and abstraction, or the known and unknown. If something is indeterminate, that brings potential. And potential brings agency for change, for involvement.

“That’s the energy I strive to bring into my recent FIELDwork installations too. I want the work to embrace you but at the same time disrupt things and propose other realities. And that same line of thinking feeds into the photograms as well. I want them to provoke your imagination whilst making you aware of the contingency and mutability of perception.”