British Ceramics Biennial 2015: a tale of regeneration and loss in the Potteries - a-n The Artists Information Company 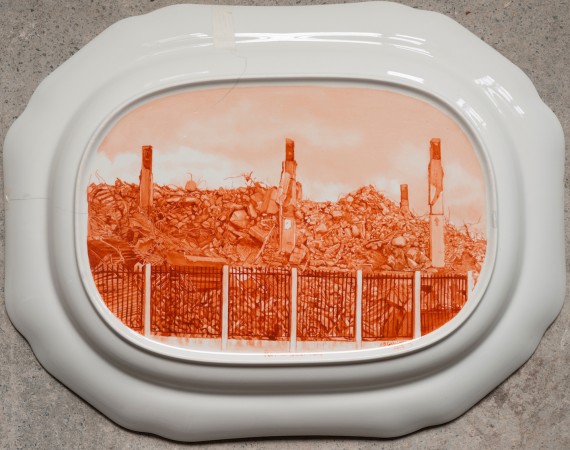 As the fourth British Ceramics Biennial opens in Stoke-on-Trent, the long-declining local potteries industry is showing signs of a last minute revival.

The most ironic evidence for this appeared last year when local firm Hudson & Middleton announced they were doubling their Staffordshire workforce after sealing a deal to export bone chinaware to – of all places – China, where so many local jobs were outsourced in recent years.

Other Staffordshire firms including Wedgwood, Steelite and Emma Bridgewater are also reporting strong economic performances and have increased their workforces.

Even the site of this year’s biennial – the huge, former Spode factory which closed in 2008 and is now owned by Stoke-on-Trent City Council – is beginning to find a more long-term purpose as redevelopment work continues to convert part of it into 43 artists’ studios, with further plans on the horizon for student accommodation and retail units.

But if there are indications of recovery for Britain’s ceramic capital city, this biennial also highlights one big downside: the loss of valuable skills. Included in the show are installations, demonstrations and a film from a project called Re-apprenticed, by Neil Brownsword, who calls himself an “artist-cum-archaeologist” and is a research reader at Buckinghamshire New University.

When I visited, Holdway was hard at work on the intricate engraving of a dead pigeon discovered on the Spode factory site. This engraving will become the decorative pattern for a transfer that can be applied to pieces of china.

Holdway’s delicate cutting actions were being video-projected live, using a microscopic camera. Nearby, I chatted to Brownsword, who thinks people like Holdway represent “an invaluable cultural heritage which for some reason the UK doesn’t acknowledge. ‘Craft’ crafts have been conserved – industrial craft hasn’t been taken into the equation. When these people go, that knowledge goes with them.”

Brownsword knows his way round the ceramics industry. When he was 16 he started his first apprenticeship at Wedgwood. Pointing towards a sizeable display detailing “every china flower-part Rita Floyd ever had to make”, he is clearly in awe of the woman’s artistry.

“She learned by observation, repetition, and improvisation. I’m fascinated by the way she can grab a volume of material and with three movements of thumb and forefinger she can create a petal. They’re seemingly quite abstract in form but I just love the variety. Technology will never be able to automate flower making.”

Yet the “transgenerational” way skills like these used to be passed on has now broken down, because UK factories decided they cannot afford them. When I mention the fact that some local manufacturers have been expanding their workforces, he is not impressed. “Skills were not passed on. Now, ironically, manufacturing is coming back – and there is a skills shortage.”

In any case, despite the recent upturn, the number of local people working in the ceramics industry is nothing like as sizeable or significant as it was: since the early 1990s the workforce has dropped from 20,000 to less than 7000 today.

And if the future for the industry lies in offering what local MP Tristram Hunt calls a “high quality, brand conscious business model” to the expanding new Chinese middle-class market, something about that managerial language makes it difficult to see a place for hand-painting  or engraving – or making delicate flowers out of white clay.

Teapots, on the other hand, are another matter. Up the road at AirSpace Gallery, an artist-led contemporary art space celebrating its 10th anniversary next year, gallery director Glen Stoker introduced me to a show simply entitled Icon, by artist Ian McIntyre (pictured below).

The icon in question is the ‘Brown Betty’ teapot, still made from red terracotta clay sourced from a local marl pit first discovered by two Dutchmen in 1690. Available in two, four, six, eight, or ten-cup sized pots, the Betty is today made solely by one firm, Cauldon Ceramics of Tunstall. And they’re not expensive (in fact they’re on sale at the biennial shop). To say the Brown Betty is popular would be an understatement: it even has fan clubs in Australia, the USA and Japan.

But what is interesting about Macintyre’s show – consisting of photos, a hand-drawn wall mural and lots of teapots – is the way so many ingenious design details included in early Brown Bettys have been lost. The spout, for instance, used to include a rough edge underneath to catch drips, and there was a lock on the lid and a grid inside the pot to capture tealeaves.

Economic pressures, plus the invention of teabags, have eradicated most of these details. And if you’re wondering if the classic teapot was named after a real-life Betty, nobody seems to know. But Stoker’s trying to find out.

Back at Spode, there is no shortage of ceramic creativity in evidence, from artists of all ages. With fewer and fewer BA courses available in pure ceramics in the UK, the importance of the British Ceramics Biennial in encouraging young artists into the field is obvious. There are wonderful new ceramic designs on show as well as conceptual art.

You can take a gamble on a fairground coin-pusher machine using ceramic money, in Lawrence Epps’, AGAIN, for the very last time – a piece that’s inspired by Dostoevsky (pictured second from top). You can go through a very small door into a  unusual ‘anti-shaman’s mud hut’ made from powdered dried China clay mixed with coconut oil, and see Sam Bakewell’s Imagination Dead (pictured below), a collection of mysterious talismans.

Even Bruce McLean has been “ripping into” the ceramic process, producing a limited edition of a hundred decorated bowls which will be on sale for £750 each. Or, if you’re not so wealthy, there’s always a Brown Betty.

The British Ceramics Biennial is on at various venues across Stoke-on-Trent, including the original Spode factory, Kingsway, Stoke-on-Trent, until November 7. www.britishceramicsbiennial.com