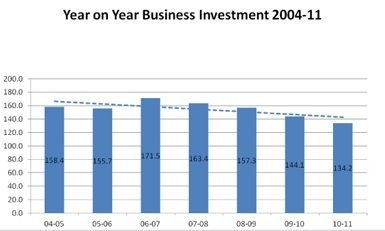 In addition, arts institutions in London benefited most in the last financial year. The capital received 71% of all private money, with south-west England and south-east England (excluding London) the main losers.

Culture minister Jeremy Hunt told BBC Radio 4’s Today programme: “I don’t regret for one second the effort Ed Vaizey and myself have put into boosting business support for the arts. I think it would have fallen a lot further if we hadn’t put in the effort that we have.”

However, the shadow culture minister Dan Jarvis, disagreed. He said: “The government promised that cuts in public funding for the arts would be replaced by philanthropist’s generous donations. We can see that this simply hasn’t happened. Whilst private giving has increased by £28.5m in 2011, the public funding to Arts Council England was cut by £71m. This is deeply worrying for the long-term sustainability of the arts sector.”

Although businesses are still committed to working with the arts, they are not hardwired to do so. Corporate money is a discretionary spend, particularly in hard times. As a result, business investment in 2010/11 is now lower than it was in 2004/05.

Philip Spedding, Campaign Director, Arts & Business, said: “The downward trend on business support for the arts remains our prime concern. However, we are beginning to see some in the arts discovering other productive ways to work alongside business, and our role remains to develop, sustain and celebrate these new ideas and models.”

Read the full report from Arts and Business here