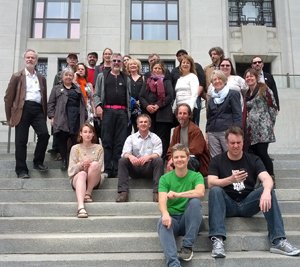 Canada’s Supreme Court has decided unanimously in favour of artists in its verdict on a long-running fight over minimum fees. The court battle was between artists’ representative bodies CARFAC and RAAV and the National Gallery of Canada.

CARFAC have been working with galleries in Canada to institute voluntary minimum wages. Due to the status of the National Gallery of Canada, its importance to artists and thus the increased risk of artists withdrawing their right to a wage, the request to the gallery was for a binding minimum wage.

The disagreement began in 2007 when the National Gallery queried the implementation of such a binding agreement, saying that it created a conflict between two existing acts in Canada: the Status of the Artist Act and the Copyright Act. CARFAC described the gallery’s position as essentially arguing that ‘CARFAC and RAAV were taking away the right of artists to be paid less if they chose’.

Raising the funds for legal action via a crowdfunding campaign supported by artists throughout Canada and Quebec, CARFAC and RAAV’s victory sees a judgement that appears to give the Status of the Artist Act precedence over the Copyright Act in certain cases. This means that collective bargaining for better conditions for artists can override individual negotiations. It is now possible for CARFAC to resume its conversations with the National Gallery of Canada and agree a suitable rate.

“It’s a good day for artists,” said Grant McConnell, president of CARFAC. “This is a major victory for all artists in Canada and Quebec.”

Karl Beveridge, an artist and co-chair of the negotiation committee, said: “We are looking forward to resuming negotiations.”

An international view on artists’ fees by Susan Jones