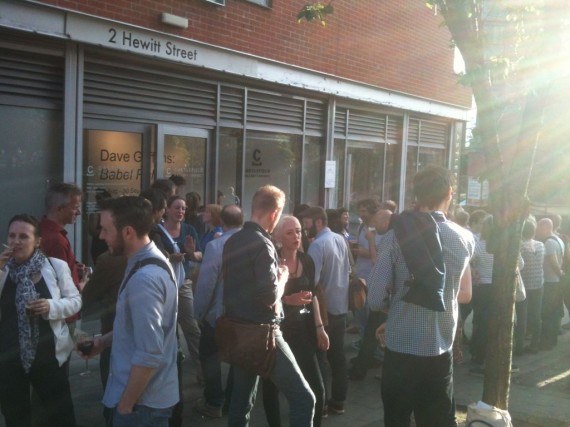 Manchester’s visual arts community was out in force last night for a packed reopening party at Castlefield Gallery. The event marked the beginning of a new era for the organisation, which lost its revenue funding from Arts Council England in last year’s National Portfolio Organisations review.

Launching with the exhibition Babel Fiche by Manchester artist Dave Griffiths, the gallery’s director Kwong Lee introduced a series of speakers including Vivienne Bennett, Director of Visual Arts, Arts Council England, Professor John Hyatt, Director of MIRIAD, and Penny Macbeth, Head of Art and Associate Dean at Manchester School of Art, Manchester Metropolitan University. The relaunch follows a challenging year for the gallery as it has reviewed its funding model and direction.

Among those showing their support for the gallery at the opening was CEO of Cornerhouse, Dave Moutrey. Asked about the significance of Castlefield to the city’s contemporary art scene he said: “It’s really important that galleries like this exist in Manchester because of their relationship with producers in the city.

“You need a diversity of venues to make sure there’s an effective ecology for artists to work in the city. It’s a good place for experimentation and smaller, single artist shows, but more importantly it has a fantastic relationship with the artist community.”

Manchester artist/curator Mike Chavez-Dawson said: “Castlefield is very important to the city because it supports artists first and foremost, and it’s great that for the opening show they’re working with Dave Griffiths, who’s represented by the Manchester gallery Bureau. I’m hoping that with this relaunch they go back to that early spirit they had, which was very much about being a resource for emerging artists.”

Also at the launch was 2010 Northern Art Prize winner Pavel Büchler, who earlier in the year acted as auctioneer at an event to raise funds for the gallery. He welcomed Castlefield’s reopening, whilst adding that there is much more that needs to be done to improve Manchester’s art infrastructure.

He said: “There are many gaps in Manchester and it’s astonishing in a city this size that there are probably no more than five professional artists. No one gallery can fill all the gaps and Castlefield does what it does. But the city still needs a really serious gallery of contemporary art – a Kunsthalle – committed to putting on great work and nothing else.”

Babel Fiche is Castlefield’s annual solo exhibition and forms part of three main shows at the gallery in 2012-13 under the theme ‘World in Transition’. Griffiths’ work addresses issues around analogue and digital technology, working with microdots, microfiche and film. The show, which features two new pieces, Deep Field [The Photographic Universe] and the film Babel Fiche, continues until 30 September.

Castlefield director Kwong Lee on the last year and lessons learned: Our values and impact need to be better articulated