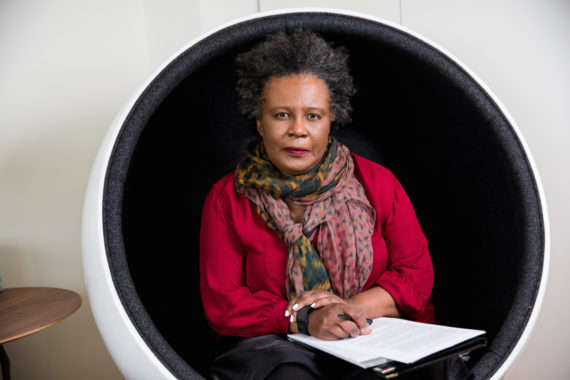 The relationship between art, money, power, race, gender and the spectacle of Black death have arguably gained particular urgency in public discourse in the wake of the 2017 Whitney Biennial, and in the shadow of Black Lives Matter. This renewed focus on the experiences and depiction of the Black body can be evidenced in the work of a new generation of African American academics (see, for example recent books by Uri McMillan, Malik Gaines and Christina Sharpe).

American poet and author Claudia Rankine’s forthcoming play, The White Card, plunges a knife into the heart of this debate. The play’s second act received its first public reading at Tate Modern last week, followed by a discussion with Rankine and the play’s dramaturge and director P Carl, moderated by Zoe Whitley, co-curator of Tate Modern’s current exhibition ‘Soul of a Nation: Art in the Age of Black Power‘.

The play’s title is a reversal of the mythological ‘Race Card’ that BAME people supposedly have access to as an excuse for our supposed inadequacies. On this reading, The White Card proved to be a powerful vehicle for the exploration of Rankine’s take on the art world’s complicity in the maintenance and exploitation of the kinds of structural oppression that affects the lives of so many.

The play features a fraught and highly-charged conversation between Charles, a middle aged, white art collector specialising in the work of African American artists, and Charlotte, a young Black artist in his collection. It transpires (during the unseen first act) that Charles’ wealth is derived from building private, for-profit prisons, and that he has recently revealed the acquisition of the archive of Michael Brown’s autopsy for his collection. The official record of the death of a young Black man at the hands of the police has become an object of desire for him, like a painting or sculpture.

By eliding the prison industrial complex with art capital, Rankine uses this mise en scène to explode some of the most charged and pertinent intersections of capitalism, race, empathy and resistance in a chillingly believable scenario. The connection between the experience of injustice, either leading to art (which is then co-opted and made fashionable) or leading to protest (which is then criminalised) is poignantly observed. What is an artist to do?

Referenced in the play, and the Q&A session that followed, is Dana Schutz’s controversial painting of the disfigured body of Emmet Till and the phenomenon of the ‘Black Death Spectacle‘ (hat tip, Parker Bright) so evident in popular culture – from music, to television to visual art. What is the cumulative psychological effect of the endless parade of the Black victims of white violence and state indifference, whose names roll so easily off the tongue – Trayvon Martin, Sandra Bland, Philando Castile and, on this side of the Atlantic, Stephen Lawrence, Cynthia Jarrett, Rashan Charles…?

Does the endless loop of images of Black death mean that we can never imagine a different future? What comfort does it provide for hegemonic whiteness? As Charlotte says to Charles, “it is a form of privilege to grasp pain through art”. What about those who live with the real possibility of un-avenged death because of the shade of their epidermis?

Through her Racial Imaginary Institute, Rankine seeks to produce scholarship that reframes ‘how we are used to looking at canon’ and supports counter-hegemonic thought. Rankine’s work addresses the heart of an ongoing debate, which has publicly been expressed by many Black artists, academics and public figures, but also on twitter and other social media, as well as in private conversations: Is it really our role to constantly inform people of our humanity? What parts of ourselves do we lose if we dedicate our time to doing so? Can we afford not to?

This conundrum is familiar to many Black people working within predominantly ‘white’ spaces (ie the art world). Charlotte accuses Charles of having an ‘empathy gap,’ of only seeing aestheticised Black pain, as opposed to individual Black people. The kind of gap that would refuse to see Martin or Brown as just teenagers, as opposed to dangerous hulking ‘monsters.’ The kind of gap that profits off the prison industrial complex (disproportionally affecting Black Americans), and the reoccurring Black Death Spectacle in contemporary art.

Rankine sees this educative work, which Sara Ahmed has described as ‘becoming a diversity worker’ (willingly or unwillingly), as something she must do. It is an individual decision, but one which also increasingly feels generational, with younger people more inclined to refuse; certainly such work can cause fatigue, leaving little space for joy, wonder or militancy.

Rankine shared a particularly illustrative anecdote with the audience. During a visit to the exhibition of paintings by British painter Lynette Yiadom-Boakye at the New Museum in New York, Rankine engaged in a conversation with a Black museum guard, who asserted that the exhibition was the most important show in New York. Why? “Because we are alive,” he said.

‘Soul of a Nation: Art in the Age of Black Power’ continues at Tate Modern, London until Sunday 22 October 2017