Coliseum of the Consumed - a-n The Artists Information Company 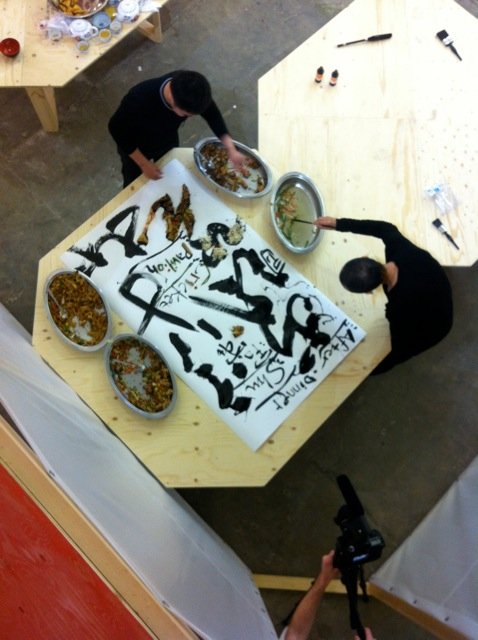 “There’s a dilemma with events like Frieze that you fall into the standard modus operandi of showing art for people to look at or buy. We wanted to make this a useful opportunity – to raise funds for our local cricket club.”

Alistair Hudson is deputy director at Grizedale Arts, a curatorial project run from a refurbished fourteenth-century hill farm in the Lake District. Responding directly to its rural situation, but with a global outlook that addresses wider ecological and agricultural concerns, Grizedale looks beyond established art world structures to pioneer new approaches to artistic production that foreground the social value of art and its dissemination into everyday life. As such, it is perhaps a curious choice for presentation at a major metropolitan fair selling luxury goods to the art elite.

“We worked closely with [Frieze Projects commissioner] Sarah McCrory,” Hudson explains. “She was looking for projects that would complement the fair and offer something different to the other gallery stands – a kind of antidote to Frieze.”

Coliseum of the Consumed is a programme of food-related performance, discussion and retail hosted by Grizedale Arts and the Yangjiang Group, an artist collective from China’s Guangdong province. The coliseum structure is a re-modelling of the Group’s Cricket Pavilion, originally designed as a multi-use, open-air building for Grizedale’s local cricket ground (although it fast proved unsuitable for the rainy Lake District climate). The Pavilion was later presented as a space for after-dinner calligraphy in a major solo exhibition at Eastside Projects in Birmingham.

A cross between a Roman amphitheatre and a sports pavilion, the coliseum has a central arena and an outer colonnade. Visitors to the fair will be able to watch discussions and performances taking place in the arena, or walk around the colonnade where a host of artists and arts organisations, including Eastside Projects, will be selling fresh, cheap food produce from make-shift market stalls.

An alternative, provocative and practical site of consumption and commerce, Coliseum of the Consumed also offers a critique of the way socially oriented practice currently sits within the art world.

“There can be a lot of over-wordiness around these kinds of projects,” Hudson says. “Artists can lose their sense of perspective and think they’re leading the way in farming and food production by building a geodesic dome and doing a lot of talking – it’s not always that useful. We wanted to offer a different take.”

With a working farm at the centre of their programme, and a long-standing and grounded commitment to agriculture as art practice, Grizedale’s project is much more than an opportunistic flirtation with sustainability. Their relationship with Vitamin Creative Space – the organisation and gallery representing Yangjiang Group – is an established one, and based around their shared holistic view of art and culture within society.

Nevertheless, Hudson explains it’s not always easy to convince funding bodies to support Grizedale, so to have an opportunity to present on an international stage is a welcome one. “It’s nice that Frieze recognises the validity of our work,” he says, “hopefully it will lead to even bigger and better things in the future.”

Coliseum of the Consumed is at Frieze Art Fair, London, 11-14 October.
www.friezefoundation.org