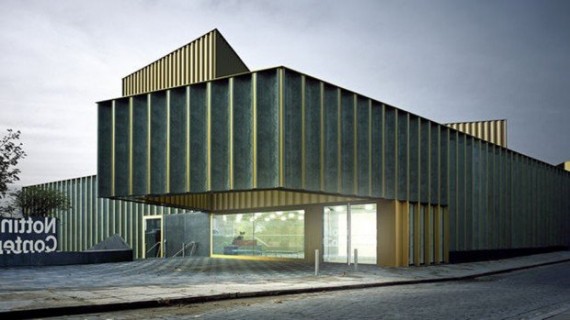 Contemporary Art Society’s National Network was welcomed to The Space at Nottingham Contemporary for its annual conference on Friday 22 March, taking as its theme ‘commissioning for public collections’.

This was at least partly an opportunity for current CAS Director, Paul Hobson, to showcase recent recipients of the Society’s own Annual Award, introducing speakers from The Hepworth Wakefield, Wolverhampton Art Gallery and Film & Video Umbrella, who worked jointly to produce Luke Fowler’s The Poor Stockinger, The Luddite Cropper and the Deluded Followers of Joanna Southcott in 2010; Nottingham Castle Museum & Art Gallery, where Christina Mackie’s The Judges III will remain on display until 27 April; and The Collection, Lincoln, whose ambitious 3D scanning project with Oliver Laric is in development after receiving the award in 2012.

The stage might have been set for a day of self-congratulation, but the morning’s keynote speakers were all, in their different ways, as keen to discuss the problems as the public triumphs of even their most carefully tested commissioning processes.

Sally Tallant, Director of Liverpool Biennial, presented an overview of the festival’s well-documented ‘greatest hits’ – from Anthony Gormley’s atmospheric Crosby Beach installation to Ai Wei Wei’s spider’s web of illuminated Swarovski crystals. She threaded her talk with hints about commissions that hadn’t happened, or might have stayed in place longer had their popularity been better anticipated – Ron Haselden’s neon Animal (2006) and Richard Wilson’s iconic Turning The Place Over (2008) being two of the most familiar already retained by the city.

Tallant was diplomatic about the challenges and opportunities presented by a city with a declining population. While spaces like the Cunard Building, unattainable elsewhere, are within the Biennial’s reach, grandiose urban developments like Liverpool One and the Dubai-scaled planning of the newly approved Liverpool Waters proposals, raise hard questions about the Biennial’s role in the city’s ongoing reinvention.

That diplomacy was wryly noted by Film & Video Umbrella’s Steven Bode, who admitted that some of the juicier tales he’d been planning to share about the “nitty gritty” of commissioning might have to be omitted, now he’d been told proceedings were being recorded for online streaming. He then went off-script and delivered a rambling but informative account of his organisation’s pragmatic evolution from being “a child of the BFI” touring artists’ films, to a cross-platform developer of installations and touring exhibitions. Bode talked of the stereotypical views of the commissioning process that too often imagined institutions obsessed with box ticking and trying to control truculent artists. In reality, he said, artists were rarely the “impractical, romantic figures commissioning institutions expect to be working with.”

Now working across conventional galleries and online platforms, Bode noted Film & Video Umbrella’s interest in “merging physical and virtual spaces” and the opportunities presented by commissioning young artists, as he had recently with Ed Atkins and Naheed Raza in Tomorrow Never Knows. These were artists who had grown up with social media, with a sense of their lives existing partly in virtual spaces, with all that this new reality entails.

It took Ingrid Swenson of PEER to shake up the developing consensus about young artists, dialogues and digital networking, pointing out that her gallery’s street-facing location in Hackney makes PEER “an example of a gallery in an expanded field, presenting contemporary art by stealth”, as with John Frankland’s Boulder (2008) – huge granite rocks that had been left unlabelled and were adopted by locals as landmarks and objects to climb.

Swenson noted that such work could more readily find acceptance when “not identified as art.” She talked about Bob & Roberta Smith’s Shop Local (2006) – murals celebrating the area’s independent businesses – and PEER’s role in commissioning Martin Creed’s Work 203: Everything Is Going To Be Alright (1999) as a site-specific neon on a neo-Classical portico in Clapton. The work has since been remade for many other sites, from Tate Britain to Times Square.

Questions of concern to artists

When the discussion panel convened after Marguerite Nugent (Wolverhampton Art Gallery), Gemma Hayes (The Hepworth), Deborah Dean (Nottingham Castle) and Ashley Gallant (The Collection and Usher Gallery) had presented the Contemporary Art Society award winners’ case studies, it was Swenson and Bode who raised the questions most likely to concern artists.

Given tightening funds, should institutions be negotiating contracts that give them a financial interest in the resale and redeployment of the works they commission? Oliver Laric’s 3D printing project at The Collection had raised questions about value and access, prompting Bode to wonder if Luke Fowler’s film, now held as unique copies by The Hepworth and Wolverhampton Art Gallery, might have been distributed digitally, and if it had, what would this mean in terms of its value as an artwork? The risks of new technology were discussed, Gallant wryly noting that being so far ahead of the market might mean his institution would come to own “the 3D printing equivalent of a CD-ROM” – but he felt the risk worthwhile, given the potential benefits.

The day’s routine assertions that institutions needed to “offer opportunities to young and emerging artists” also raised a flurry of discussion. When Swenson broke ranks with that particular consensus, mentioning 80-year-old Stuart Brisley and suggesting she was “bored with hearing about young and emerging artists. Young and emerging is all very well, but I’m more interested in old and submerged artists these days”, there was a palpable surge of approval, as much from the younger elements in the audience as their elders. It’s hard to find a particular thread that could be said to have run through these varied talks and discussions, but on that point, Swenson had clearly struck a chord.