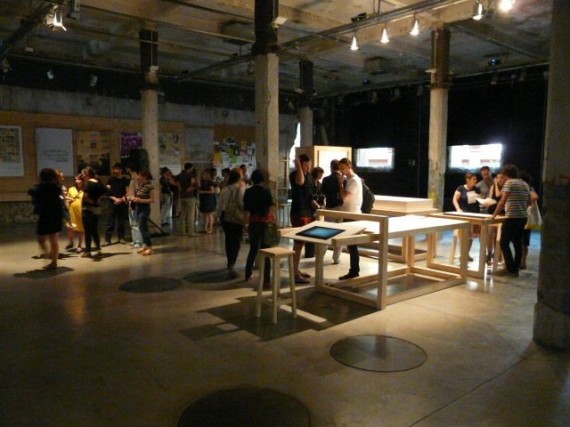 ‘Let us be known, let us be seen and let us Shine’, serves as both title and mission statement for a 2 week seminar currently taking place in Madrid, organised by Curators’ Network, a project initiated in 2010 by Madrid based organisation Hablarenarte, with the aim of promoting intercultural dialogue amongst “peripheral European art scenes.” The network, jointly funded by the European Commission and not-for-profit arts organisations in Romania, Hungary, Poland, Austria and Spain has held four gatherings to date, with member organisations each taking turns to play host, where alongside seminars, discussions and exhibitions, portfolio reviews for 20 local artists take place. I attended the opening days of this, the fifth meeting of the network, which was conceived of as an opportunity to review its past activities, and to consider its future at a moment when initial funding has run dry.

Along with a number of invited guests, I had been asked to contribute to seminars on art and promotion, art and education and to input to the general discussion around the future of the project. The geographical scope of the network has, to some extent followed national funding priorities, with those organisations able to access funding from their embassies and cultural ministries joining the association at the outset. Our own British Council and its equivalents in France and Germany had seemingly shown little interest in the notion of a network connecting peripheral arts communities, whilst their eastern European counterparts had been more enthusiastic.

In Madrid, events are being held at the Matadero, a vast and eerie complex of former slaughterhouses, recently renovated to become a multi-purpose arts venue. According to Soren Meschede from Hablarenarte, a founding motivation for Curators’ Network was to promote some of the “great work that is being produced by artists in Spain, who don’t get the attention that their equivalents in Britain, Germany or France do”. There is a general perception amongst members of the network that, unlike in their own countries, art scenes in Britain, France and Germany are more diverse and cosmopolitan, meaning that artists based in these regions are more likely to enjoy international visibility.

Coinciding with the day that their country joined the EU, Marta Kis and Karla Pudar presented the visual arts department of Zagreb Student Centre, a gallery and residency organisation they run in Zagreb, Croatia. As they described how a key concept of socialism, ‘culture as a basic need’ has suffered in Croatia’s difficult transition to free market capitalism, I am reminded of UK culture secretary Maria Miller’s recent feeble justifications for the value of culture on solely economic terms. Following Marta and Karla, Nini Palavandishvili from GeoAIR, an artist led organisation in Tbilisi, Georgia presented its public-space focused work, both of these organisations are interested in hosting future gatherings of the Curators’ Network.

Commenting on the local scene in Madrid, artist Diego Delpozo told me that the anger that gave rise to the recent protests in Spain including the 15 M movement has now largely given way to a widespread “depression” amongst his peers who see little hope for the future: “many of us are starting to realise that we will be poorer than our parents” he tells me. According to a number of Madrid based practitioners present, many of the city’s arts spaces have closed due to funding cuts, meaning that artists practices are shifting to research, discursory and other non-space reliant modes.

Seminars on ‘art and promotion’ provoked interesting questions around the notion of vocation vs profession; to what extent do we as artists and curators approach what we do as passionate enthusiasts or diligent specialists. Many of the curators present felt that it was not their job to promote the practices of the artists they worked with, rather they preferred to use supposedly more democratic strategies such as ‘open calls’ in order to widen participation in their projects. Direct promotion of artists was generally seen to be too closely associated with the work of commercial gallerists and the art market, whereas networking and connecting via the internet and social media was viewed as useful, but to what end seemed unclear.

This notion to connect with other organisations in similarly decentralised locations (read: not in London, NY or Berlin) may well be an outcome of our era of digital connectedness. Being based in Manchester, I have observed something similar taking place in the UK, with artists and arts organisations often forming partnerships within mainland Europe, China or the US, whereas previous generations may have looked directly to London as their first port of call. It’s possible that we may be witnessing the emergence of a more evenly distributed global map of art activity. To what extent these collaborations are directed by national strategic funding priorities remains to be seen. The internet has undoubtedly given us much greater opportunity to make initial introductions, however, as many of the artists and organisations present in Madrid attest to, it has been the meetings in person which have resulted in concrete collaborations and meaningful dialogue taking place. Casual post-seminar chats over dinner or drinks has solidified relationships, and may make subsequent email dialogue clearer and more meaningful. So, it seems that whilst the internet is rapidly redrawing the map of our relationships and dialogues, a physical meeting of minds may still have an important role to play.

See Curators’ Network for information about upcoming events in Madrid and beyond.

Curatorial practice – Guides, Profiles and Features for artist-curators and those working with collaborative practices.