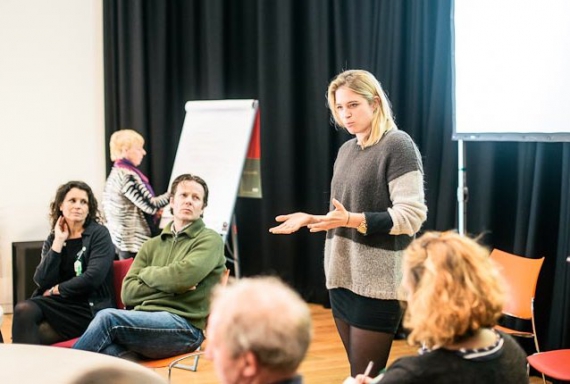 Eighteen months ago, the Making It project started to ask what craftspeople need, and what would make a real difference to their practice, their self-esteem and their access to a range of markets. The project has gone on to provide networking and mentoring, with days devoted to education and studio learning, collective workshops, and professional opportunities for many craftspeople and designers at different levels.

The project is ambitious and long-term: it encompasses Laura Ellen Bacon’s magnificent, benevolent, aromatic installation of birch in Winchester Discovery Centre’s gallery, and two, year-long, free studio space offers at Making Space in Havant, one of which has already been taken by textile designer Deryn Relph.

Making It Professional, at Winchester Discovery Centre on 12 October, was a day-long development event for makers. During it I recognised, not for the first time, that creative individuals are already uniquely equipped to deal with most challenges, but sometimes need a bit of a steer to realise exactly how.

Take finance for instance: How can we think beyond the limitations of public funding? How can we save ourselves from the repetitive and stressful drudge of writing formal applications for diminishing public and charitable funds? Hen Norton, founder of crowd-funding initiative wedidthis.org.uk, encouraged practitioners to regard fundraising as part of the core of any engaged creative practice.

The crowd-funding principle is of course akin to crowd sourcing: using the web and other tools to publicise projects and ideas, to build audiences and sign up subscribers; asking a little from many, rather than a lot from a single source. “The more inspiring and exciting it feels for the artist,” says Norton, “the more inspired people are going to be, and more keen to be to engage, both by coming to see the work, and also by giving a small amount to the work.”

Deirdre Figueiredo, Director of Craftspace in Birmingham, described how she had imaginatively tackled head-on the issue of ‘serial’ workshop participants: repeat beneficiaries of community workshops who have gained skills and social benefits but who never progress and move on. Founding a social enterprise transformed them into producers – Shelanu Women’s Craft Collective gives refugee women creative and productive roles, with proper economic outcomes, producing limited edition and batch production jewellery through collaboration with local designer makers. Figueiredo describes craft as “experiential; an embodied way of being in the world”. Shelanu can now lead its own workshops, develop product lines and contribute to the creative community.

Artist and writer Rachel Lichtenstein was perhaps a surprising choice of speaker for this event, but her presentation was rich and revealing. Her value here was as a role model; she is herself an exemplary ‘maker’. She seamlessly and creatively transfers skills between her practice as a visual artist, her writing, her expertise as an oral historian. It is as if a textile is being rendered – we may encounter the piece from one end or the other, or maybe catch a glimpse of the middle, but the whole is skillfully woven together, rich with possibilities and textures, each part connected to history and place.

Lichtenstein lays bare the processes involved in her craft – her accounts of meeting characters in the story she is building around the local area are incredibly detailed, but they transport you there. Suddenly you can understand the skills involved in transforming oral history research into an engaging read. She has carved for herself a unique position between literature, history and visual practice, and established a following and demand for her output. Her recent book on the history of Hatton Garden is about expertise, the handling of materials and the hitherto mysterious and closed world of Jewish commercial exchange; it’s about honour and steadfast commercial practice, too.

Lichtenstein has access – she is Hatton Garden family, uniquely qualified to engage and comment, and she gives us her insider’s view. She read a passage aloud. It was of course about craft, about the kinds of lapidary and metalworking skills which are the result of seven-year apprenticeships, long days and years of graft, and total immersion in the environment of backroom jewellery production.

It also covered locale and community, people and personalities, and practical jokes played on new apprentices; a rich catalogue of anecdote and observation, an illuminated doorway into a closed and now disappearing world. She spoke lucidly of the recent democratization of writing. Anyone can tweet and blog and reach a willing audience, and it is within these more casual writing forums that makers can find a voice and create a powerful presence. Like crowd-funding, these forums build communities of subscribers – but to an idea, a personality, a creative individual.

I was at Making It Professional to conduct a couple of workshops on ‘Writing about Craft’, with Professor Simon Olding of University of the Creative Arts. Not everyone is comfortable with writing. Practitioners who can skilfully manage complex projects with multiple collaborators, stakeholders and participants, who can wrest objects of beauty from the most unpromising of raw materials, and who are confident enough to stand up and give account of their work to a roomful of people, may falter at the prospect of committing their words to text. But during this brief workshop, encouraged to write about the craft of others, many found themselves able to articulate insights which they could then apply to their own work.

The workshop emphasised best practice in professional writing about the crafts, but also tried to identify the real value of what makers can bring to writing: a deep understanding of process and creative intent; creative approaches to structure and delivery; the importance of individuality in an increasingly corporate world.

While the day was undoubtedly in part (and as billed) a ‘celebration’ of making, its true value was in providing real-world skills and insight into new working models, and channelling the energies of makers into developing sustainable business practice as well as product.

More information on the Making It project at www.makingitproject.com

How to get crowd-funding – Emily Speed on how crowd-funding uses the Internet to manifest new possibilities for revenue streams, turning small stakes into big ideas.

Critical mass – Rosemary Shirley’s guide to using www.a-n.co.uk/interface as a tool for improving your critical writing.