Conference report: What Next? - a movement in the making - a-n The Artists Information Company 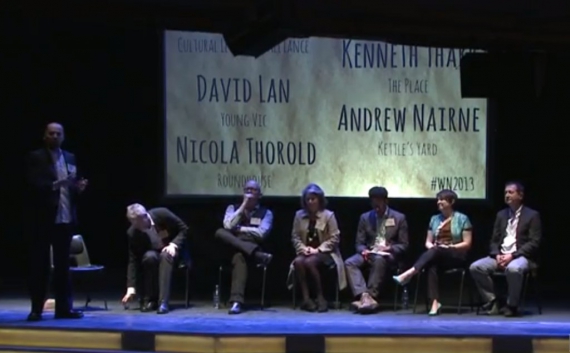 Against the backdrop of the national spending review on 26 June 2013, the first national gathering of arts and cultural organisations came together under the banner ‘What Next?’ at The Palace Theatre, London on 29 April 2013. Described by its instigators as a ‘movement’, the terminology is important – hard lessons were learnt from what have retrospectively been deemed ineffectual arts advocacy actions during the last spending review, such as the various save the arts campaigns in 2010.

Back then, many people in the arts were involved in one campaign or another, but were we any good at it after 15 or so years of increased public funding? Had the arts sector become complacent because it is one of the fastest growing economies, contributing a reported £4 billion towards the national economy? Or were there inherent challenges within the arts as a conglomeration of diverse cultural communities that cannot easily be brought together as one collective voice?

What Next? is a movement for many good reasons. Its spirit is in a joining up of people who are passionate about the positive effects the arts have on communities. Its ethos is steeped in grass roots movements with a distributed leadership model, and its ambition is to include people from any artform.

Rather than a campaign about the impending cuts in public funding (an estimated further 30% for 2015/16), What Next? sees itself as a long-term advocate of the values of the arts. Or to quote its carefully considered phrasing: ‘Our main task is to encourage these people, as individuals and as communities, to make connections between the many different ways art and culture affect and enhance their lives. We want to urge them to register their endorsement of, and pleasure in their art and culture. We want them to become active participants in this debate and in the work that we do.’

It seemed to have hit a nerve with arts professionals, as 650 of us gathered in London. The morning session was made up of small groups laying out the process that started about a year ago with a London group meeting weekly to discuss ways to galvanise public support and ask urgent questions such as, ‘What does art and culture do for Britain?’ and ‘How to engage policy makers who wouldn’t listen to ‘us’ but to business leaders and voters?’

A good example cited was the way that Save the Children achieved influence by getting high profile celebrities to ring up CEOs of FTSE companies, while taking out a full page advert in the Financial Times. The old school method of special pleading to ministers was rejected because it is perceived as lobbyists fighting partisan causes; the ‘working with’ approach is accepted as the way forward.

A positive influence has already come from the group’s dialogue with Education Secretary Michael Gove who, in February, abandoned his controversial English Baccalaureate Certificate. Since then, What Next? groups have been gathering in Manchester, Liverpool, Coventry, Cambridge, Cardiff, the North East and the South West, with local discussions that feed into this national conversation.

Some notable suggestions coming from our morning session were to ‘act before action is required’, that is to look beyond the impending cuts and plan ahead for a pro-active approach; for funded organisations/projects to celebrate their support by being more obvious, eg using a phrase like ‘Proud to be supported by the British public’; to have a creative industries federation so that the collective organisations can speak with one voice; and to instigate a national art day that encourages participation as well as engagement with art.

The afternoon session started with a number of short speeches and was peppered with case studies that compellingly demonstrated how the arts makes a difference in people’s lives. Some strong messages were repeated, such as ‘make friends, not demands’ and the need to connect with local communities, businesses, MPS and head teachers.

An interesting conundrum that has come up in recent years is the perception that the arts are less accessible than sports, and yet many more people go to the theatre (and art galleries in an earlier study) in Britain than to football matches. The difference is that sport is seen to be enjoyed by everyone including amateurs and children, and that the arts has a separation between the professionals and others, sometimes referred to as the amateur or voluntary arts.

One speaker highlighted that amateur arts communities are much bigger than the arts professional sector, and called for all of us to embrace the whole ecology. In a related way, and back to terminology, an earlier conversation at a Manchester meeting brought up the challenges the ‘art’ word has outside of the professional arena, when more descriptive words like dancing, painting, and music communicate better, and that perhaps ‘culture’ is a more useful word.

A lot of this movement feels right. As a representative of a small visual art organisation that focuses on artist development and emerging practices, I think this is a timely action – it is how we collectively act that will matter in the short and long term.

For me, one of its key challenges is how the movement can encompass the many artforms under one umbrella. From the list of 650 attendees, only 43 were from the visual arts sector, while the majority were from the performing arts. This is a movement in the making and there are obvious challenges, such as the dominance of theatre, that this is an England-only movement, and that only a handful of artists are currently involved.

My observation is that visual arts professionals and artists are less likely to be engaged in and be vocal at these types of conferences, whether by self-selection or simply that there are fewer of us. I think there is an obvious role that AIR – with its large membership of artists and makers – can play in taking the artists’ voice to the table. The national and regional contemporary visual arts networks can also play a role in rallying its membership and connections.

One thing is certain. Here is an important and urgent opportunity for all of us who care about the future of the arts, whether supported from public or private sources in the future, to do things that will make a difference locally and nationally.

The What Next? conference’s afternoon session was recorded and can be viewed on the website, which also has a clear direction and action points. www.whatnextculture.co.uk