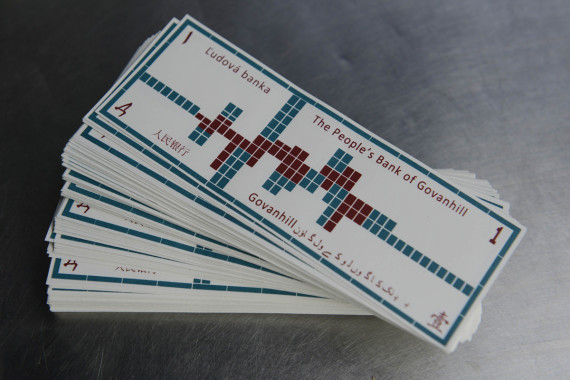 During her 2015 residency at Glasgow’s Govanhill Baths, artist Ailie Rutherford began to wonder how an alternative currency might impact the Govanhill community.

As an initial conceptual suggestion, she created a pop-up exchange booth for The People’s Bank of Govanhill, ready with screen-printed Govanhill notes. At the time, this was just one of several works created for the launch of Rutherford’s Future Archive for Govanhill Baths.

What was initially a suggestion has grown and been taken on by the local community. A year down the line and Rutherford is crowdfunding to help make The People’s Bank of Govanhill a longer-term reality.

“There’s been a demand for something more to happen,” she says. “People have really taken to the idea of creating a new local currency for the area, but there’s an understanding that what we need here is a new form of currency – none of the existing models quite fit.”

The project will continue to test out different forms of currency, with the funds raised going towards a programme of events and the printing of a new set of notes, designed by artist Marvin Gaye Chetwynd who is also a Govanhill resident. With 60 different languages spoken in this diverse area of Glasgow, Rutherford is also fundraising to work with bilingual speakers to man the pop-up booths.

It is a project for the community that Rutherford hopes will also become by the community. “Projects like this, The People’s Bank of Govanhill, gives us a chance of community ownership, something that everyone shares and something we can all join in,” says Jim Monaghan of Govanhill Baths Community Trust in the campaign’s indiegogo video.

The Crowdfunding campaign functions with the same ethos as the Govanhill currency. Supporters pay what they can – a suggested exchange rate is one Govanhill note equals 100th of your weekly income – and in exchange they will receive a signed, dated and editioned artist-designed banknote.

Those who pay £25 or more will receive a full set of three notes, designed by Rutherford, Chetwynd and a locally-based Govanhill artist who will be commissioned should the crowdfunding campaign reach its target.

To find out more or pledge your support for The People’s Bank of Govanhill, visit the indiegogo page

Crowdfunding the arts: why it’s about much more than money