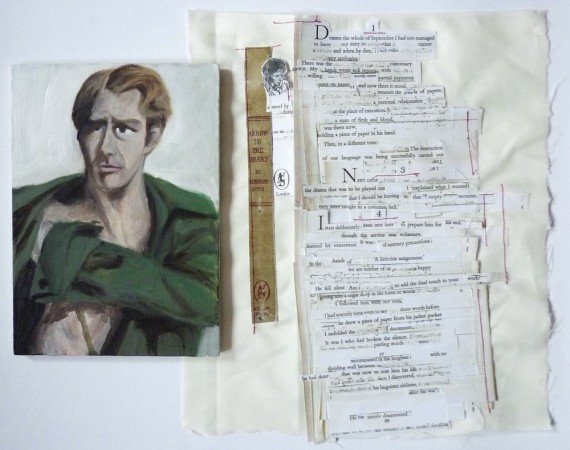 Co-Respondent is a group show exploring processes of collaboration – ‘the pleasure and pain of working with A N Other’. Four sets of two artists have created works involving text and imagery, each exploring a subject in which the duo is specifically interested.

“It has been a real joy,” says artist Corinna Spencer, who has worked with Andrea Hannon to create a two-part painting that explores relationships between Ford Madox Ford’s Edwardian novel Parade’s End and Hannon’s own short story Arrow to the Heart. “The delicate negotiations that took place while making the work were one of the most enjoyable parts. We talked about what as individuals we could draw from [the texts] and where our feelings intersected. Together we experimented with the final piece.”

The show is, on one level, a reaction against the idea of collaborative working as a means of stretching resources or placating funding bodies. “Application forms often require the ‘funded thing’ to be all things to all people,” explain Transition’s co-directors Alex Michon and Cathy Lomax. “The process becomes a ticking of boxes where a sort of holier-than-thou inclusivitiy is required, but prescribing artists and art works is surely a contradiction in terms.”

Lomax was keen to involve artists who already have a close working relationship with the gallery, including some of their interns and volunteers. “This seemed a fitting way of approaching the theme,” she says. These artists, in turn, each invited another to be their collaborative partner. “I didn’t impose any restrictions on the work,” Lomax adds, “and as a further level of collaboration two of the artists, Travis Riley and Mimei Thompson, are installing the show.”

The project embraces all that is playful and open-ended about collaborative working, exploring individualism as a starting point for an exciting and unexpected two-way dialogue. It considers the role of the ‘lone practitioner’ in processes of correspondence, an interesting and perhaps anachronistic notion in our socially-networked and hyper-connected world.

“Counter-intuitively, I think lone ranger artists are more insistent and more connected to their individual obsessions now,” says Michon. “Anything can be magically looked up and pored over, then all those bedroom Googlings can be put out there to find an audience or similar participants.”

Several of the works in the exhibition are in diptych form – demonstrating the ‘call and response’ nature of the artists’ exchanges and identifying the two halves of the pairings. But did the artists themselves sense a change in approach compared to when working alone?

“It did impact on how I thought about why I was making these paintings,” says Spencer. “There were strands of narrative, ideas developed by myself and Andrea that needed to be woven into the work. I enjoyed the more drawn out, two-way thought process – it forced me to slow down, which is sometimes a really useful thing.”

Collaborative relationships index – series of articles published in a-n Magazine from 2008-12 exposing the working relationships between artists and the wide range of professionals they collaborate with.

Then & Now: Collaboration – two-part article printed in the final (June 2012) issue of a-n Magazine: Chris Fremantle offers his reflections on collaboration having mined a-n’s archive of Collaborative relationships articles. Alongside this, a feature from May 1998 shows artists’ perspectives at that time.