Derek Jarman: "He was shy and proper, radical and subversive" - a-n The Artists Information Company 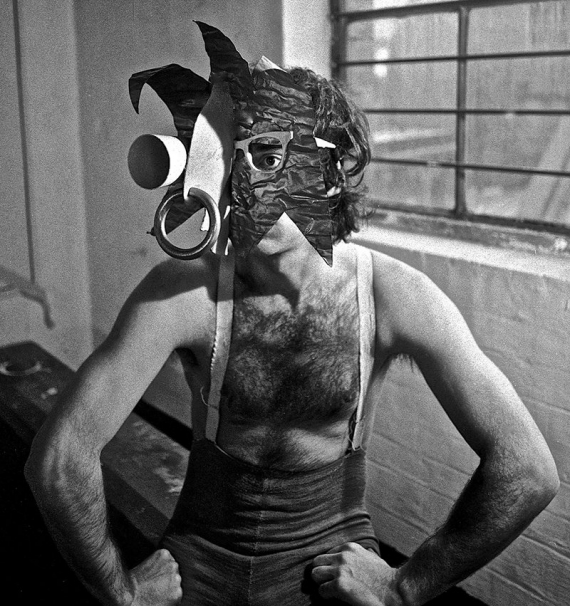 “In the film Blue, [Derek] Jarman talks about the ‘pandemonium of image’. And you get a sense of that rush of imagery, a layering of images, in many of his Super 8s, his paintings and elsewhere.”

Mark Turner, Professor of English at King’s College London and curator of Derek Jarman: Pandemonium, is explaining the show’s title. The exhibition forms part of Jarman2014, a year-long cycle of events, exhibitions and film screenings commemorating the life and work of Derek Jarman, the pioneering artist, filmmaker, gardener, poet and queer activist who died 20 years ago on 19 February 1994 from AIDS-related causes.

For Pandemonium, Turner takes Jarman’s brief spell in the 1960s as a Humanities undergraduate at King’s as a starting point to trace a history of the artist’s life in London. (Jarman had an agreement with his father that if he first completed an academic degree, he would be supported through painting studies at the Slade.) In a richly layered journey through the basement spaces of the college’s Inigo Rooms, we travel from his student days to warehouse living at Butler’s Wharf in the 1970s, to his use of Docklands’ derelict Millennium Mills in The Last of England (1987).

While the displays give a sense of Jarman’s exuberant and maverick persona, there is at the same time an archival, scholarly feel to the project. It’s an interesting dichotomy that perhaps reflects something of the artist himself. “I do think there are a number of contradictions in Jarman the man and in his work,” says Turner, “something quite shy and proper on the one hand, something quite radical and subversive on the other. To me, this is very English.”

Detailed wall texts and an exhibition guide in the form of a compilation of Jarman’s writings – printed in antique gold and embellished with Elizabethan occultist John Dee’s monas hieroglyphica – underscore the show’s academic context and the love of knowledge, language and literature that pervades Jarman’s work.

“He was studious and a voracious reader,” Turner says. “Some of his intellectual interests he brought with him to King’s – like a love of ancient cultures and Shakespeare. But his Humanities degree enabled him to expand these interests, which then stayed with him his whole life. His imagination fed off and transformed his deep learning in quite unexpected ways.”

Turner’s own attention to detail honours Jarman’s erudition and rabid curiosity, and gives a fresh and intimate insight into the artist’s life and working process. The bringing together of so many of Jarman’s belongings – homemade film props and paper masks, books and hand-written letters, even one of his Super 8 cameras still speckled with dust and inscribed in the artist’s calligraphic hand – helps to preserve and transmit a sense of Jarman’s creative energy.

“I was very touched by his personal objects,” says Turner. “Jarman took enormous care with things and everything around him was important – his friends talk of dinner parties when he’d start etching little sayings or images on the water glasses, which the friends now treasure. Although I never knew him, he strikes me as sensual and tactile, someone for whom the material world matters.”

If Pandemonium succeeds in conjuring Jarman’s presence and vitality, it is by contrast his absence that is most keenly felt in Chelsea Space’s Almost Bliss: Notes on Derek Jarman’s Blue. Centring on the artist’s A Blueprint for Bliss notebooks, made in 1989 as he developed what was initially conceived as a monochrome film dedicated to Yves Klein, curator Donald Smith has assembled a collection of objects, notes and artworks relating to Jarman’s final feature, creating an environment for reverie and reflection.

With the gallery’s central ramp and floor-to-ceiling plate glass windows tinted IKB, the visitor is softly enveloped in the blue of Jarman’s thoughts – and, tragically, his fading vision. An alternating soundtrack of waves on the shingle beach at Dungeness – where Jarman would tend the garden of his timber cottage – and Klein’s single-note Monotone Symphony, is at once soothing and desperately poignant.

“I wanted to create a space to come and think, for contemplation,” explains Smith, for whom Jarman was a friend of a friend and a mentor. “I knew there’d be a lot of ‘noise’ in other venues, and ‘celebration’. But for me it’s not really a celebration, my mate’s partner died. I wanted to do something different, and also to draw attention to the aspect of his practice that was about formalism, structure and clarity.”

The lightness of Smith’s curatorial touch is striking – there are no labels or texts on the walls and the show’s minimal visual language reflects that of the notebooks and of Blue itself, an elegant unfolding of blue frames on white. “I didn’t want a curatorial voice to dominate the show,” he says, “it was about creating a vibe, an atmosphere.”

Almost Bliss refers to two previous artists’ installations created in the wake of Jarman’s death: Peter Fillingham and Keith Collins’ contribution to the 1999 Witte de With show Stimuli, which also created an ambient environment around Jarman’s Blue notebooks; and Mark Wallinger’s 1994 installation for Every Now & Then, a group show in the former Edwardes Square artists studios in west London.

For the latter, Wallinger placed a grand piano in a space used by Jarman shortly before he died, and still containing his unpainted canvases, brushes, paints and overalls. With the piano’s frame open but its keyboard closed, he played a recording of the instrument being tuned, evoking a tragic sense of imminence and potentiality. Here, 20 years on, a single empty sheet of manuscript paper recalls Wallinger’s artwork, and all those that Jarman never made.

There is a deep sense of loss in the publication created by Smith to accompany Almost Bliss. A VOID is a series of black and white photographs of some of Jarman’s possessions, selected for their representations of holes and empty spaces: an inkwell with no ink, Jarman’s gardening gloves, hagstones from Dungeness beach, the inscribed Super 8 camera included in Pandemonium, here with its film compartment open and no cartridge inside.

“When Andy Warhol died, Derek was in New York and I remember him describing how everyone was just walking around not knowing what to do. It was the same when he died. Derek kept the show on the road for a lot of misfits,” he continues with a smile, “he helped a lot of people. We all felt the void that he left.”

Reading the pages of the Blueprint notebooks encircling the gallery walls, to the swell of Klein’s D major chord, is to be taken deep into Jarman’s world. With frame on frame of gold words on blue, Jarman’s poetry spirals out much like the unravelling reel of test film in the central vitrine. When, in Blue, Jarman talks about the ‘pandemonium of image’ he counters it with: “I present you with the universal Blue / Blue an open door to soul / An infinite possibility / Becoming tangible.” And it is as though, in its solemn and heartfelt gesture of remembrance and friendship, Almost Bliss opens that door and invites you in.

For information on other Derek Jarman events, screenings and exhibitions throughout 2014 visit jarman2014.org