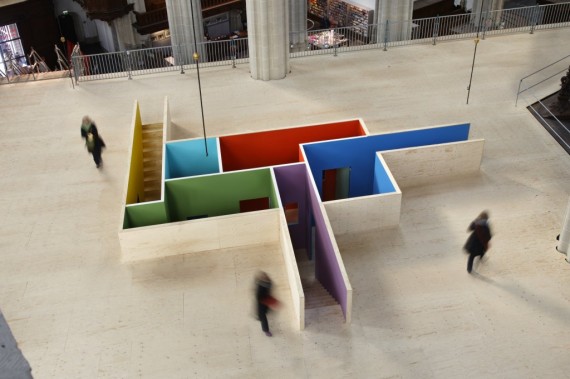 In a city with a huge amount of activity, where the population doubles in August, it can be hard to make your voice heard. This is the challenge for Edinburgh Art Festival (EAF) this year celebrating its tenth anniversary.

The 2013 incarnation of the EAF commissions programme seeks to celebrate art that not only actively generates a conversation, but depends on dialogue and participation to be truly successful. This feels particularly relevant in a year where Scotland’s future is a matter of much heated discussion. The programme is presented under the title Parley, which in military terminology is a way of resolving conflict, and inherent in that process is an invitation to ‘discuss terms’. Taking its inspiration from Miralles and Tagliabue, architects of the Scottish parliament building, the programme aims to work in a similar way to ‘not a building in a park or a garden, but a form for gathering people’.

It’s a grand statement, but the proposed works on offer certainly look to shoulder a lot of the risk and responsibility needed. Risks are a good starting point in the work of Sara Barker. There has been an increasing buzz about Barker, who is represented by gallery Mary Mary. Known for her delicate constructions in wire and metal, this will be her first outdoor commission and her most ambitious work to date. Made from interlocking forms in brass, aluminium and steel, the sculpture mirrors and reflects the ever-changing light, weather and temperature of the woodland landscape surrounding Jupiter ArtLand, who co-commissioned the work.

Talking about the move from gallery to public art work, Barker says, “This is my first outdoor sculpture; my work is more typically ‘rooted’ in the gallery space, but the imagery of planting is already prevalent in the ways I think and make, often organically constructing a central core to the work.”

Asked about who may see her work, Barker added, “The sculpture will be seen by a wide public, as well as a regular core of the professionals working in the arts, but the audience is growing rapidly through Jupiter’s excellent education programme, drawing in younger visitors and their parents. Through the Edinburgh Art Festival, visitors that might not ordinarily seek out sculptural work might also be drawn to Jupiter Artland”.

Artist, Peter Liversidge is a man who is not short of ideas. His diverse practice includes sculpture, drawing, installation and performance, but all begin with a proposal typed by the artist on his typewriter. When I say proposal, it’s normally hundreds of proposals, one of which is used. For Edinburgh however, Liversidge proposed just one, tapping into the idea of conversation by starting his own. He has offered anyone with a flagpole (and in Edinburgh, there are a lot) a simple white flag with the word HELLO printed on it.

Local context is vital for Liversidge’s projects, “Each proposal, or group of proposals is written after research into the area, town site, etc, taking into account everything from historic information to overheard conversations on the bus.” His work for Edinburgh is, says Liversidge, “a simple welcome across the rooftops. A buoyant, floating ‘hello’”.

In 1993 Ross Sinclair’s Open Letter to whomsoever it may concern… imagined a referendum held in 2061, in which ‘a handsome majority of the Scottish people had voted, en masse, to turn the whole country, and everyone in it, into the world’s first national scale theme park…’. With the referendum due next year, it seemed a good time for Sinclair’s Real Life and how to live it in Auld Reekie, a series of top ten lists of all things Edinburgh. From painters, to bands, to housing schemes, high and supposedly low culture is put up for discussion.

Asked how important public participation is, Sinclair said, “Actually, I just worked out we’re making 43,532 discrete artworks for Real Life and how to live it in Auld Reekie ranging from billboards to bags, beermats to badges, posters, postcards, records, signs, banners and an event – Real Life Parledonia. That’s 43,532 chances for a member of the public to chance upon an artwork, perhaps hold it in their hand and have a one to one Parley with the work. I think that’s better than even odds we might get a bit of discussion going? Without public interaction my project doesn’t even exist.”

Public participation is central to the success of The Complaints Choir, where people are invited to come together to share their complaints, and sing them out loud. Conceived by Finnish artists, Tellervo Kalleinen and Oliver Kochta Kalleinen, the artists have worked with the public around the world to realise Complaints Choirs in Birmingham, Helsinki, St Petersburg, Hamburg, Chicago, Singapore, Copenhagen and Tokyo.

Music also plays a big part in the work of Sarah Kenchington, who builds her mechanical instruments from discarded materials, relishing the unpredictable nature of her instruments. For Parley, Kenchington continues to relinquish control, creating Wind Pipes, her very first instrument to be played by people other than herself.

The festival also includes commissions by Christine Borland in collaboration with Brody Condon; Robert Montgomery’s new ‘Fire Poem’ sited on The Mound; Krijn de Koning’s first ever exhibition in the UK, a site-specific installation which will transform Edinburgh College of Art’s iconic sculpture court into a specially designed platform for debate and discussion; Kenny Watson’s installation, The Days, a room entirely papered with bill posters used to advertise the Edinburgh Evening News; Katri Walker’s immersive video installation, An Equilibrium not of this World.

This is complemented by permanent commissions from previous artists including Richard Wright, Callum Innes, Alison Watt and Martin Creed alongside a wide range of public events and exhibition programme.

The public’s reaction and involvement is important to the creation and participation in public art, as well as the economic benefit that results. Sorcha Carey, Director of EAF, said: “We conduct extensive independent research into the social and cultural benefits of this programme, and were particularly encouraged to learn that last year’s publicly sited commissions not only attracted individuals from a much broader socio-economic background, but also that over half of those attendees who said they weren’t planning to visit anything in the Edinburgh Art Festival programme, said they now would, after having experienced one of our publicly sited projects.”

Building on previous commissions, such as Susan Philipsz in 2012, the EAF commissions provoke a sense of curiosity about Edinburgh, its history, its possible futures, not only for the many people who live in Auld Reekie, but also visit regularly on a grand scale. It may be difficult to get your voice heard, but it sure looks like a lot of fun shouting.