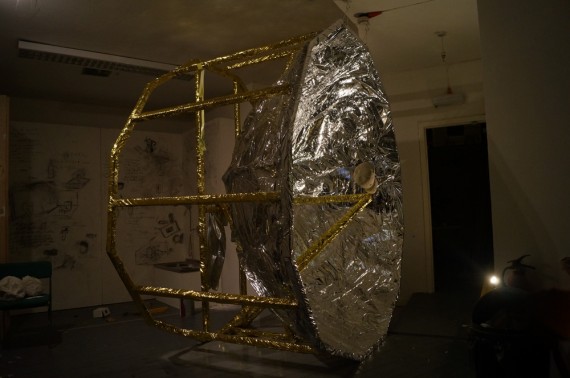 The Improbable City is the theme of this year’s Edinburgh Art Festival (EAF) commissions programme, a title that makes reference to Italo Calvino’s 1972 novella Invisible Cities with its imagined conversations between Marco Polo and Kublai Khan describing fantastical and made up cities existing somewhere between fact and fiction.

Step away from these high profile commissions, and a number of projects, new venues and a programme of talks and events also seek to reflect the ‘alternative’ city that lies within, with artists offering their own take on the improbable city theme. Here’s a selection:

Contributing to Edinburgh Art Festival for the first time is the Number Shop, an artist-led studios and project space run by recent graduates from art schools across Scotland. Its group show Work Out takes place throughout the studios, presenting a range of media from photography and sculpture to ceramics and costume-design.

“We’re lucky to be a partner with EAF this year, for what is our first funded project,” explains Alastair Grant, co-founder of the space. Its involvement has come at a time when the festival is focussing on the support of emerging artists, as Grant continues:

“We are able to produce more ambitious work with less compromise on materials. The festival allows us to provide more structure for the studio holders too – it brings us together as a group and opens us up to completely new audiences.”

Number Shop is also running a series of workshops taking place every Sunday throughout August. The first, on digital world building, is led by Grant and takes place Sunday 2 August.

Other first-time venues include Edinburgh’s newest space South Gallery which will feature the work of 2010 Edinburgh College of Art MFA graduate Eva Isleifsdottir. DIY space Garage meanwhile will present a series of projects as part of EAF’s Special Events programme which takes place across the city in pop-up spaces and locations.

The Platform: 2015 programme is a new set of commissions supporting artists at earlier stages of their careers. Antonia Banados, Ben Callaghan, Jessica Ramme and Ross Hamilton Frew were selected from an open call to exhibit in a group show at the Edinburgh Art Festival Kiosk – located on Blair Street at the former site of the Edinburgh Contemporary Craft studios.

Frew is using the opportunity to show work developed during an eighteen-month period at Paper Studio Northumbria, where he pulped books to make paper for his drawings, exploring the value knowledge within contemporary society and the role of destruction in creativity.

“Showing at the EAF Kiosk guarantees a great footfall,” he explains. “And being the starting point of the festival for many people, it’s the best place for a show like Platform. It’s important for festivals like EAF to support early career artists and opportunities like this are a necessity in order to gain the professional experience needed to push forward your practice.”

At Talbot Rice Gallery, Fabienne Hess’ exhibition Hits and Misses (from the archive) features a vast silk fabric printed with 25,000 images taken from the digitisation of University of Edinburgh’s Collection, which Hess has been working with since 2012. Taking place as part of the new curatorial project TRG3, the work offers further context to the gallery’s main festival exhibition Hanne Darboven: accepting anything among everything with its theme of cataloguing and documenting the everyday. Hess will give an artist’s talk about her work on 1 August at the gallery.

Toby Paterson’s exhibition Thresholds at Edinburgh Sculpture Workshop (ESW) brings together a series of constructed reliefs made for seven Maggie’s Centres in NHS buildings across Scotland. Maggie’s offers support for people effected by cancer by exploring new models of living and working that do not separate art from life. Patterson will be discussing the project, and his interest in making through direct experience with people and places, with the curator of Thresholds Judith Winter at ESW on 8 August.

Edinburgh-based artist Catherine Street has been commissioned as this year’s festival Tourist in Residence and is tasked with creating alternative tours of the city through new participatory works.

Street will present three instalments, The Book of Breath & Sound, The Book of Money, The Book of Shock – all extensions of current strands in her practise that use audio and writing.

The Book of Breath & Sound takes place on 8 August and will involve, as Street describes, “deep listening”, inspired by recent experiences at Scottish Sculpture Workshop. As a group exercise the work will also include eavesdropping and elements taken from voice training sessions.

Each tour will explore different parts of the ‘improbable city’, a theme Street found useful as a starting point.

“Edinburgh has this very beautiful image, but I wanted to come away from that and look at what it is doing functionally now,” she explains. “The Book of Money will deal with the city in its contemporary function as Scotland’s capital of finance. Money is this slippery thing which depends so much on a belief that appears to be routed in both imagination and in something material.”

A Q&A with… Charles Avery, artist: discussing a new site-specific commission as part of this year’s Edinburgh Art Festival.