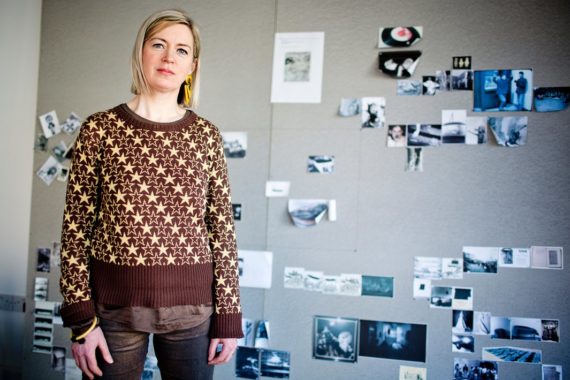 I remember my BA degree show really well. I was working in the painting department and I was making these strange tablets of wax. They were embedded with systematic grids based on lace, so they were geometric but elastic. The BA degree show [1988] I put together was an intensive month of work. I made four or five large pieces that were about a metre by 70cm, maybe bigger.

I worked with all these chemicals, latex, wood dye and other spirit-based varnishes, and smoked throughout it all! I was in this studio in the basement of the art school and I used to put out cigarettes on the palette. I don’t smoke now and I’ve only ever smoked on and off, but I got quite into it at that particular time; sitting back, having a cigarette, looking at your work, playing out the anxieties of putting on a show.

I was enjoying it, the jeopardy of it, making a whole new body of work, really throwing myself into that. And the slight glamour of the feeling that it might all go terribly wrong, and that smoking was a sort of youthful analogue of that.

I took the degree show incredibly seriously. But I would demure from saying that this meant I was deferent towards it.

The degree show was, I guess, the end of being part of what was a particularly intense peer group. I was one of those people, as were many of my friends, who was in the studio all of the time – we really lived there, it was where we spent our days. I knew I was going to miss the intensity of that experience and the pleasure of it as a working environment, and I did.

I’ve never in any of my subsequent experiences had quite that intense context. Of just people being there and making their work and how important that was.

This is an extract of Elizabeth Price talking to Chris Sharratt for a-n’s Degree Show Guide 2017. Read the full article on issuu: