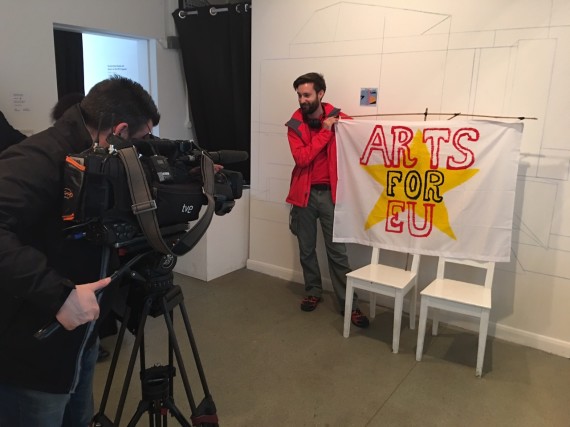 A new campaigning group led by artists is calling for an ‘in’ vote in the EU referendum in June.

@artsforeu is led by artist and AIR Council member Joseph Young, Nico Heller of The Democracy School, and artist and writer Dan Thompson.

The group has support from Furtherfield gallery, the curators of Kensington and Chelsea’s InTRANSIT festival and the official endorsement of the national office of CVAN.

Young said: “The group was started by myself a couple of months ago in response to the lack of positive messages coming from the Remain campaign. I looked into the various cultural groupings and only Creatives for Europe seemed to be active.”

Explaining what the aim of the group is, Young said: “It is about sending a positive message and we believe that artists are best placed to make the case for Europe. The centuries of common cultural values that bind us to our European neighbours are stronger than the issues that divide us. We are clear – British culture is stronger in Europe.”

Young says he feels as much a European as British, and this benefits his artistic practice. “My father’s family came to London as Jewish refugees from Poland in the early part of the last century and I spend a few months of every year based in Berlin making work, so my personal connections with Europe are strong.”

For many artists, the EU has opened great opportunities for cross-channel collaboration, with Young adding: “It has made it easier to travel for work, and funded much arts infrastructure directly. We want to promote this fact.”

The main focus of the campaign is online, with the website www.artsfor.eu acting as a curatorial hub for artists’ works exploring European cultural identity.

Young explains: “We will be offering artists – through an open call – the chance to submit new or existing works that deal with the issue of cultural identity in the broadest possible sense. This might be an image, text, a film, or a piece of music.” Invited artists will each be given a unique login to the site on which to design and present their work.

The group has also posted a Call to Action film, A Declaration for Europe, which is now live on YouTube.