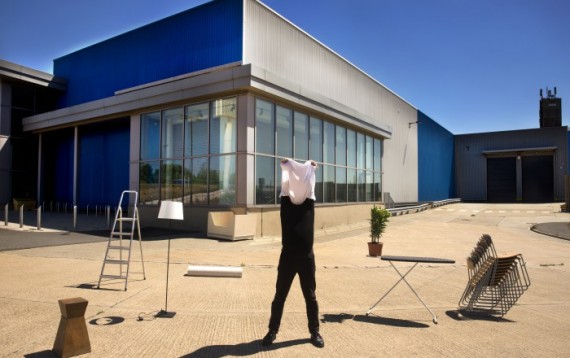 Four artists have been shortlisted for the 2016 Arts Foundation Award: Art in Urban Space. The £10,000 prize, supported by the Yoma Sasburg Estate, is for artists who create objects, installations or interventions that ‘enrich the texture and visual experience of our urban spaces’.

Coleman produces public, sculptural artworks, including the 2015 Royal Academy installation, A Greater Order. Bobby Niven’s Bothy Project – with architect Iain MacLeod – has involved creating spaces for other artists to work and live in.

Ruth Ewan, shortlisted for the sixth Max Mara Art Prize for Women, recently created the French Republican Calendar for her show at Camden Arts Centre, which saw her bringing together 365 items used to denote days of the year in this revolutionary alternative to the Gregorian Calendar.

Deaf artist Aaron Williamson is known for his anarchic performances. His current work, Demonstrating the World (pictured above), was commissioned by Unlimited and is presented on a purpose-built mobile stage set.

Art in Urban Space is part of a series of awards from the Arts Foundation launched last year with Art in the Elements. 2017 will explore artists working with ‘art in architecture’.

The award is to be used to pay for living and working expenses and is intended to support the winning artist in furthering their practice. It is one of six categories in the Arts Foundation’s annual awards, the others being: children’s theatre, materials innovation, literary translation, producers of live music, and jewellery design.