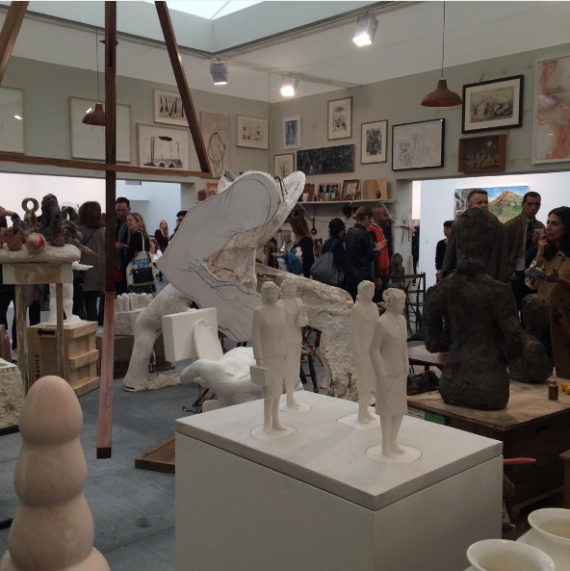 Confusion reigns in the toilets at Frieze Art Fair, or at least the ones that Julie Verhoeven has got her hands on. There’s men in the women’s, women in the men’s and apologies all round as people – myself included – realise they’ve been guilty of a public convenience faux pas. And all it took to create this mix up was pink carpet leading to the boys and blue for the girls.

These mixed messages are part of Verhoeven’s Frieze Projects’ toilet takeover that sees her decorating one of the art fair’s plush Portaloos with playfully crude imagery, toilet attendant cut-outs, and trolleys stocked with cleaning products and crocheted paraphernalia. She’s on hand to help, too: art in the toilets – it’s a Frieze first. 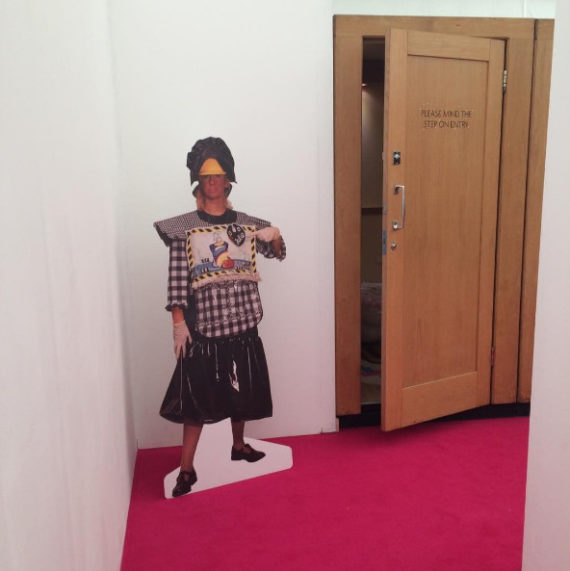 Welcome to the 14th edition of Frieze Art Fair, then, with over 160 galleries from 30 countries and a curated Projects strand dotted throughout the vast tent. There’s Hong Kong artist Samson Young’s iPod and headphones mystery walk, culminating in some unexpected human interaction in one ear; a fascinatingly rich multimedia installation introducing the Operndorf Afrika project in Burkina Faso, West Africa; Yuri Pattison’s screens on wheels showing live streamed pictures from outside the tent as text scrolls over them.

Of course this is all a mere sideshow to the main meat of the fair – the gallery stands themselves. And if the crowds are anything to go by this year’s big hit is Hauser & Wirth with its ‘L’atelier d’artistes’: an enjoyable chaotic mash up of over 50 works that fight for space on the floor and walls, the whole thing mimicking the romantic notion of the busy artists’ studio. There’s Phyllida Barlow, Martin Creed, Rodney Graham, Ellen Gallagher, Mark Wallinger, Paul McCarthy – where to look first?

That’s a question that the whole Frieze experience always prompts, and in truth there’s no easy answer. With so much work on show, it’s less about destinations and more about turning a corner and finding something unexpected that cuts through the fair’s aura of moneyed entitlement, bringing the world outside flooding back in. 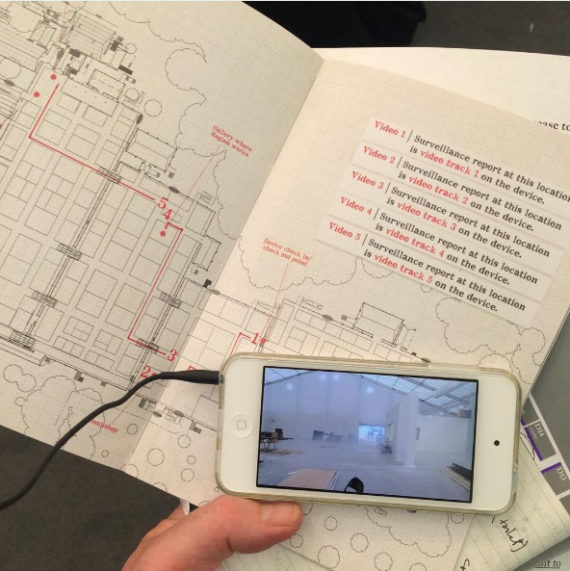 The collages of Lebanese artist Rabih Mroue at Beirut gallery Sfeir-Semler do just that. These simply framed works feature people from media photos of the Syrian conflict which, stripped of their context, seem to expose the isolation and vulnerability of individuals in the midst of war. Subtly powerful, they form part of an impressive presentation that also includes work by Mounira Al Solh and Walid Raad. 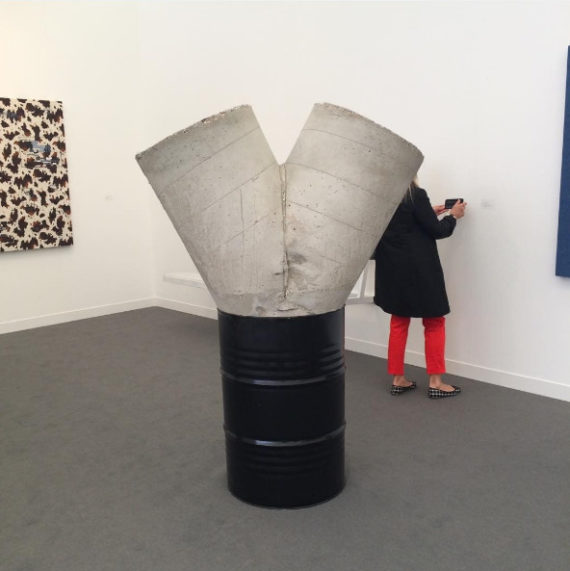 At Galerie Chantal Crousel (Paris), Oscar Tuazon’s End Connector also feels like it’s digging beneath the surface of modern life. Its two concrete pipes protruding from a metal barrel resemble some kind of brutalist farce, a meshing together of materials and form that finds beauty in clumsiness.

That’s the thing with an art fair of this scale. While there is always plenty to groan and moan about, plenty of art objects that feel like they’ve come off some art fair production line, there’s just as much that is surprising, intriguing, and stays with you once the cacophony of the moment has passed. 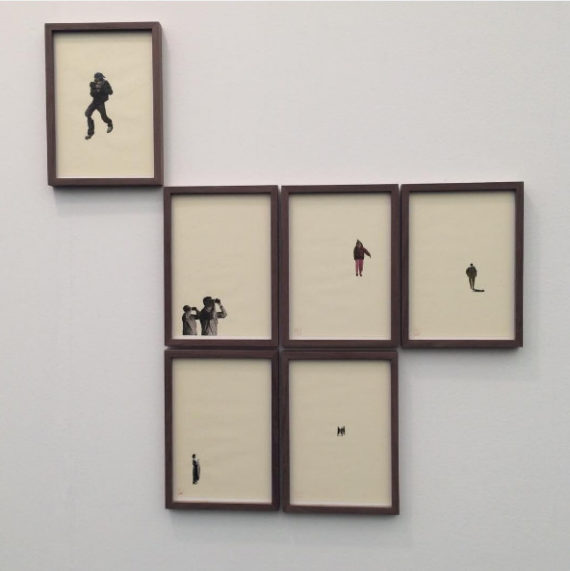 There’s a new, ‘The Nineties’ section at this year’s fair, too, curated by Nicolas Trembley and recreating what he feels were seminal shows from the era: Wolfgang Tillmans’ tiny 1993 show at Cologne’s Buchholz & Buchholz, and Richard Billingham’s ‘Ray’s A Laugh’ from 1996 are clear highlights.

Is it too early to already be recreating this period, showing artists still active today in such a reverential way? Actually, it’s an idea that seems to merely echo what many galleries at the fair are already doing, as new and older works rub shoulders and, apart from those artists working with new digital technologies such as VR, approaches associated with the past or present blur and bleed into each other. This is an art fair after all, and the passing of time is a great conferrer of value. Even, perhaps, for performance installations in toilets.