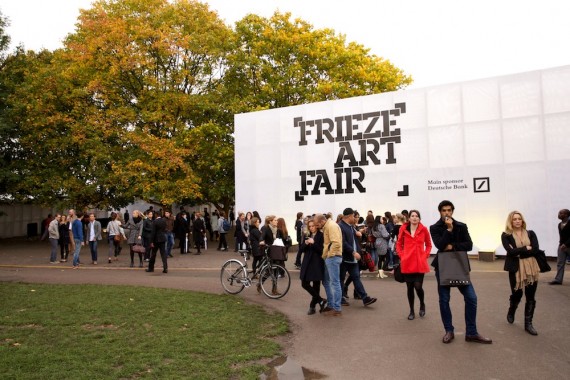 Once again the annual ‘Frieze week’ is upon us, with many of the world’s key commercial contemporary art galleries setting up in Regent’s Park, London and much of the capital’s art community responding with exhibition openings, events and viewings for collectors. There are also a raft of other art fairs taking place across the city, hoping to take advantage of the buzz and excitement that Frieze is still able to generate. For all the fun of the fair, read on…

Frieze London
Billed as ‘the contemporary art event of the year’, Frieze presents the work of over 1000 international artists and features more than 170 galleries from the well-established to emerging spaces hoping to make their mark. In addition, Frieze Projects presents a programme of artists commissions, and there’ll be the usual artists’ film programme and talks. Also,  for the first time this year, the fair introduces ‘Live’ – a  section dedicated to ambitious performance-based installations.
15-18 October, Regent’s Park, London NW1, friezelondon.com

Frieze Masters
While the main Frieze art fair grabs the headlines, Frieze Masters – just 15 minutes walk away from the main attraction – places a contemporary lens on historical art. All the work featured was made before the year 2000, ranging from the ancient era and old masters to the late 20th century. Some real art world heavy weights are taking part, including Gagosian Gallery, Hauser & Wirth and Lisson Gallery.
15-19 October, Regent’s Park, London NW1, friezemasters.com

The Other Art Fair
Returning for its sixth edition, the Other Art Fair boasts its largest roster of emerging artists to date. Some 130 unrepresented practitioners were selected by a panel including artist Polly Morgan and curator Sophie O’Brien. Once again, the fair is presented alongside Moniker Art Fair (now in its fifth year) which explores contemporary art with roots ‘embedded in urban culture’.
17-20 October, The Old Truman Brewery, Brick Lane, London, E16, www.theotherartfair.com

The Independent Artist Fair
Returning for its second year, this fair aims to put artists rather than the market at the forefront. Featuring over 50 contemporary artists from across Europe, America, Asia and the Middle East, the exhibition includes sculpture, painting, photography, video, installation and performance.
15-19 October, The Rag Factory, 16-18 Heneage St., London E1, www.tiaf-london.co.uk

1:54 Contemporary African Art Fair
Back again after its 2013 debut, 1:54 aims to provide a platform for galleries, artists, curators, art centres and museums involved in what the organisers describe as ‘African and Africa-related projects’. Initiated by Touria El Glaoui under the auspice of Art Africa Ltd and designed by Rashid-Ali, it showcases the work of 27 galleries from across Africa.
16-19 October, Somerset House, London WC2, 1-54.com

Multiplied 2014
Devoted exclusively to contemporary art in editions, this fair is organised by the auction house Christie’s. Now in its fourth year, the fair features a wide variety of multiples, including prints, artist’s books, photographs and 3D works. A number of high profile galleries such as Flowers and Modern Art Oxford are represented, plus artist-led spaces including Bearspace.
18-21 October, Christie’s South Kensington, 85 Old Brompton Road, London SW7, multipliedartfair.com

Pavilion of Art and Design (PAD)
What sets this fair apart is its commitment to showcasing design and the decorative arts. Prominent galleries from across Europe and America are featured within a boutique-style setting in Berkeley Square. Jam-packed with some of the best in 20th century design and the tribal arts, this is one of the most unique fairs out there.
15-19 October, Berkeley Square, London W1, www.pad-fairs.com

Kinetica
This popular fair champions work in the field of kinetic, electronic, and new media art. Now in its sixth year, it has switched to an autumn date and new venue, the Old Truman Brewery. Many of the works invite audience interaction making for a fun visit suitable for all ages.
16-19 October, Old Truman Brewery, Brick Lane, London E16, www.kinetica-artfair.com

Art Apart Fair
Following four successful editions in Singapore, the Art Apart Fair arrives in London. On display are 2000 works of art by over 100 emerging artists from Asia and Europe. As well as paintings, sculpture and photography there is also work by internationally renowned silversmiths and jewellers.
17-19 October, Town Hall Hotel, Bethnal Green, London E2, www.artapartfair.com