g39 publication: "We want to communicate what makes us tick" - a-n The Artists Information Company 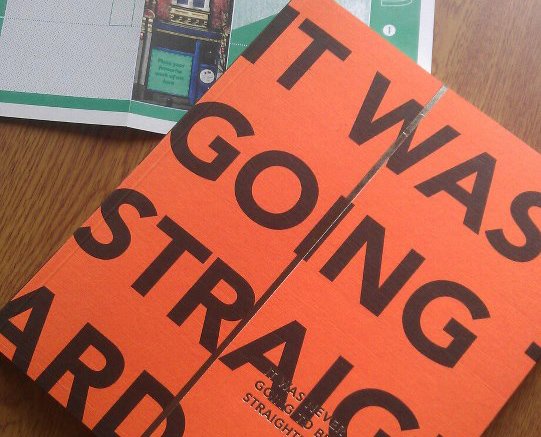 The forthcoming exhibition at g39 in Cardiff is titled Barnraising & Bunkers, the term ‘barnraising’ describing the collective action of a community who build something together. Like a communally-built barn, It Was Never Going To Be Straightforward, a new publication from this artist-run space, is a product of collectivity and community, issues that are rooted at the core of the organisation.

Edited by Emma Geliot, this vibrant account of g39’s first 13 years documents the time at its former Wyndham Arcade site in the centre of Cardiff. Chris Brown, co-founder of g39, explains how the concept of the publication evolved.

“We first planned for the book to mark our 10th year [2008], but we realised that it could be much more than an archive,” he says. “We saw it as an opportunity to instigate active discussion, a space to include written text and art works that engage directly with g39’s concerns. We want the publication to communicate to people exactly what makes us tick. It is a reflective document that channels our vision and expresses what we’re about.”

One of g39’s priorities was to avoid creating a self-aggrandising retrospective that sluggishly trawled through its history. Its thematic, rather than chronological approach, results in a fresh and lively testimonial to the artists, exhibitions and people that have contributed to the organisation. Newly commissioned artworks sit alongside the texts, ensuring that this is not a flat archive, but is instead a living, breathing display of what g39 is about.

A new work by artist James Green imagines a fictional cover for an unrealised publication titled Wealth, Art & Society. He uses colourful, collaged images of bling rings and totem pole heads to explore the idea of richness. g39 took design inspiration from the Art and Society in Wales series, radical and pioneering exhibitions and publications made by Arts Council of Wales from 1969-1977. These dealt with themes such as worship, sex, war and work, placing art in relation to its wider cultural impact.

Although the emphasis of g39’s publication is different, the series helped shape the organisation’s approach to its own themes and ideas. They also help us reflect on g39’s own cultural context.

Born a year after New Labour came into power, g39 was launched as a proactive force that aimed to develop an independent curatorial approach, leaving museum hierarchy and rules behind. Not willing to accept the status quo, they have always been a radical and proactive group who promote regional cities taking the lead creatively.

g39’s renown is not limited to Wales and it has been developing consistent, strong links with equivalent spaces in the UK such as Spike Island (Bristol) and Eastside Projects (Birmingham), whilst exporting some of Wales’ artists to Halle 14 in Leipzig, Germany. Brown points out that g39 “has a responsibility to our arts community and artists.” The organisation carefully nurtures the Welsh arts community, provides critical focus through its discussion and events programme, and offers artists opportunities and support beyond exhibiting.

The last exhibition at Wyndham Arcade closed July 2011, and as g39 settles into its new space on Oxford Street, Cardiff, Brown is looking towards the future of the publication. “Our aspiration for this book is that it will be used by a future audience to look back on what we have done, and to realise what influence we may have on their artist-led activity.”

This compendium is an important illustration of the contribution g39 has made, and continues to make, to contemporary art in Wales and beyond.

It Was Never Going To Be Straightforward costs £19.95 and is available from g39.
PLUS we have a review copy to giveaway – see Interface for more details and to apply by 10 May.