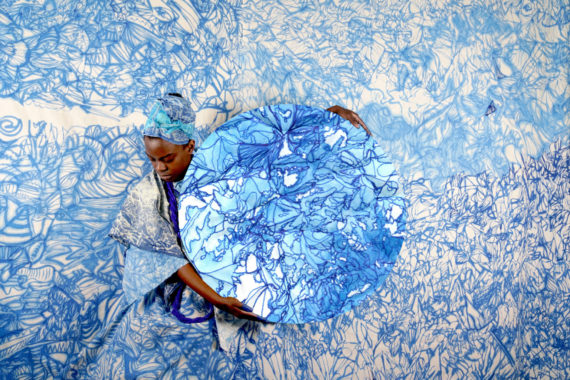 This month Glasgow International festival of contemporary visual art returns with over 70 exhibitions and events, performances and talks, taking place over 30 spaces across the city and online, and showcasing work by over 100 artists.

Originally scheduled to open in April 2020 and delayed due to the COVID-19 pandemic, the festival’s theme is ‘Attention’, which amongst other things, ‘invites us to think about how we pay attention to things and people around us, and the place of art in this’.

Launching on 11 June, it includes a Commissioned Programme of exhibitions, curated on the theme of Attention and taking place in many of the city’s most well-known venues. Also taking place is the ‘Across the City’ Programme, selected from proposals by artists, arts organisations, curators and producers who live and work in Glasgow. For the 2021 edition, there is also a Digital Programme, giving artists an alternative space in which to present work.

Here we take a look at some of the works by a-n members selected for the festival.

Sekai Machache is a Zimbabwean-Scottish visual artist and curator based in Edinburgh, Scotland, whose work is a ‘deep interrogation of the notion of self’. She is interested in the relationship between spirituality, imagination and the role of the artist in disseminating symbolic imagery to provide a space for healing.

For Glasgow International she is exhibiting ‘Body of Land: Ritual Manifestations’ at Street Level Photoworks. This show offers an intimate exploration of African diasporic femininities in Scotland and Kenya, and features the artist’s collaboration with Awuor Onyango through a residency exchange supported by the British Council’s East Africa Arts programme, produced by Fòcas Scotland and supported by Street Level Photoworks.

Machache is also exhibiting The Divine Sky in ‘These Stories: The Divine Sky at Heritage Centre’, at House for an Art Lover. Part of a twinned pair of solo exhibitions curated by Katherine Ka Yi Liu that also includes work by Glasgow based artist Thulani Rachia, the exhibitions piece together fragments, histories and mythologies as a method of survival, resistance and healing. These stories are multi-dimensional and speak of shared and disparate perspectives from the African continent and its diaspora. 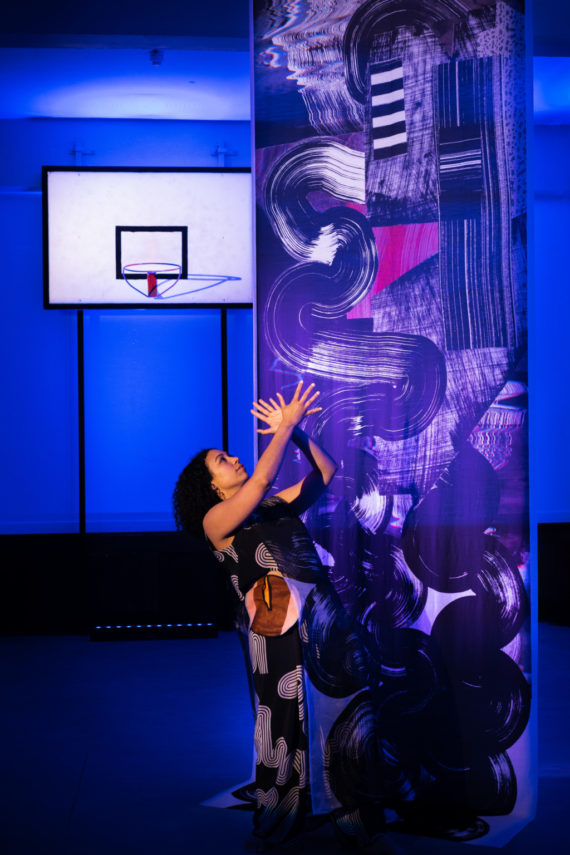 JUMBIES is a new collaborative ‘group-show-as-performance’ which weaves together the practices of visual artist Ashanti Harris, textile designer Zephyr Liddell, and sound artist Patricia Panther. For Glasgow International’s Digital Programme, each artist has produced work in response to Jacques Derrida’s concept of ‘hauntology’, an interrogation of the ways in which people, places and things are ‘haunted’ by histories which are simultaneously neither present nor absent.

JUMBIES is an exploration of the visible and the invisible across intersecting art forms and artistic practices. Taking its title from the ‘jumbie’ – a Caribbean colloquial for ghost – the project combines dance, sound, and printed textiles to create a performative space of layered fictions, alternate realities, apparitions and re-presentations.

Ashanti Harris utilises dance and performance to activate historical research. Working with a desire to make invisible histories visible, her contributions to this project draw from research into the colonial relationship between the Caribbean and Scotland, exploring the ways in which both sites are ‘haunted’ by one another. 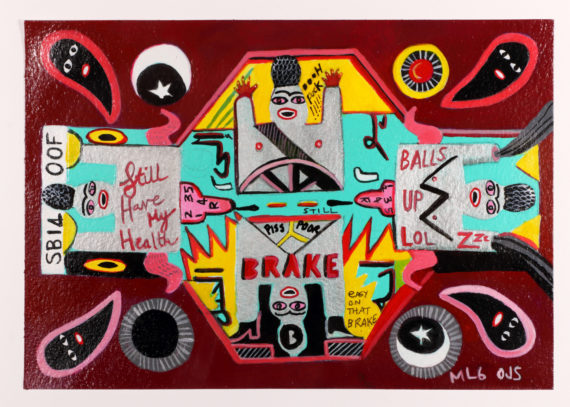 Rabiya Choudhry is part of the Fabric of Society group exhibition at The Deep End arts space, which also features Raisa Kabir, Rae-Yen Song and a-n Artists Council member Jasleen Kaur. Explaining the original idea for the work she has contributed to the project, Choudhry says: “It began in a series of smaller fabric works I was making in 2018. I was inspired by the fashion shops my dad had owned in Glasgow and had the seed of an idea to create a fabric installation somewhere in the southside of Glasgow. I decided that the project would be richer bringing together the the other artists whose work I had admired over the years.

“The project idea was intially triggered by my increasing feeling of hopelessness and disillusionment with the social and political injustices that were happening in the world. I wanted to create work that touched on some of these issues.

“I also wanted to do it outside a large institution and gallery and to have the freedom and autonomy to do it on our own terms. I hadn’t worked in this way before and it allowed us the opportunity to meet each other and to learn more about our work, our experiences and the subjects that were of particular importance to us. It was the beginning of a journey which was marked with birth and death and delayed partly due to the pandemic.

“I’m really grateful for this project and the space and time to think about life and loss. The pandemic has given us all time to pause and reflect on life and what matters to us most and has highlighted the inequalities and injustices in society more than ever.” 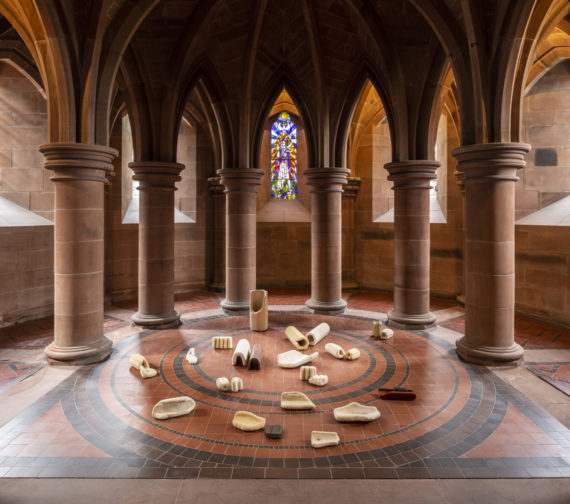 Ilana Halperin is an artist who lives and works between Glasgow and the Isle of Bute. She combines fieldwork in diverse locations, such as volcanoes in Hawaii, caves in France, geothermal springs in Japan, and in museums, archives and laboratories, with an active studio-based practice. For Glasgow International, two projects by the artist are taking place simultaneously: Excerpts from the Library is an online audio work commissioned by Patricia Fleming Gallery, while ‘There Is A Volcano Behind My House’ is a large solo exhibition commissioned by Mount Stuart, Isle of Bute.

Halperin explains: “These two interlinked sister projects have gradually been in development over the last few years. We were meant to begin install on ‘There is a Volcano Behind My House’ at Mount Stuart two days before lockdown. Then, we postponed the show for a year. The exhibition continued to grow in a time requiring almost geologic patience, and over the last few months the opportunity to work in real life in such a complex and beautiful environment has felt like a process of coming back to life.

“Excerpts from the Library has evolved throughout the pandemic. Initially, it was envisioned as a live performative event sited in a volcanic basin on the Isle of Bute. Then, over time as the narrative I wanted to tell changed in depth and focus, it felt like an ideal match to develop an extended volcanic story – an audio work that could accompany you on your trip between Glasgow and Bute, or as an armchair adventurer, no matter where in the world you might be.” 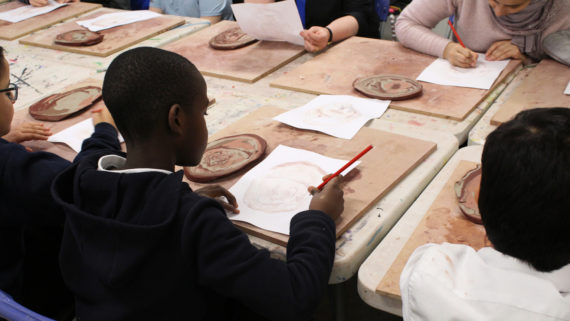 Palimpsest of voices is a participatory project developed and led by Leontios Toumpouris. It explores the fragility and mutability of language by employing making as a collective learning process, beyond words and shared backgrounds.

Through a series of workshops at Glasgow Sculpture Studios, Toumpouris worked with the extended community of Oakgrove Primary School including over 130 pupils, families and staff. Together they produced bisque-fired ceramic pieces and invented the characters of a fictional language, following a method that the artist has developed and employed in his practice over the last few years.

Reflecting on limitations as opportunities for further development and examining potentials of experiencing the project, Palimpsest of voices is presented in perpetual reconfiguration to suggest a mutable instance of online entanglement.

Toumpouris comments: “This project allowed me to develop relationships and invest on existing ones. It also made me consider site-responsiveness in terms of engagement and collaboration. The work presented at palimpsestofvoices.net consists of items and parameters that refer to the project’s processes of development and ideas associated with online navigation.”

The work will be available at palimpsestofvoices.net during Glasgow International. 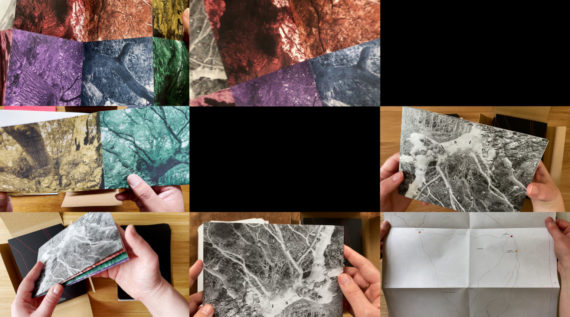 ‘seven x seven’ marks the Scottish exhibition debut of London-based artist susan pui san lok. Curated by Mother Tongue for the Glasgow International ‘Across the City’ Programme, it brings together new commissions and existing work across installation, sound, film and text. ‘seven x seven’ follows her 2019 solo exhibition, ‘A COVEN A GROVE A STAND‘, commissioned by Firstsite as part of New Geographies, a project initiated by the East Contemporary Visual Arts Network, co-ordinated by Wysing Arts Centre. The exhibition is located across physical sites and online, drawing together strands of enquiry into the histories and folklore around witchcraft. ‘seven x seven’ takes multiple forms across multiple sites, evoking and connecting narratives of gender and persecution between the East of England and Scotland, through collective acts of voicing and remembrance as resistance.

pui san lok comments: “The title of the show, ‘seven x seven’, comes out of early conversations with the curators around the work for Firstsite and our proposal to Glasgow International, looking to the etymological roots and wide cultural significations of the lucky/unlucky number seven: from seven sins to seven heavenly sisters, seven seas to seven continents, seven notes in music to seven colours in the rainbow, to seven layers to our skin. The roots of seven include ‘to sieve’ and ‘sift,’ which speak somewhat to my approach (an imprecise unearthing and sorting…) and to the elusive nature of local histories and persistent myths and folklore surrounding witchcraft.

“Early site visits took us to the Drowning Ponds at Mugdock Park, Pollok House (sometime home to the ancestors and descendants of the ‘avid witchhunter’, Sir George Maxwell), and the Ewart Library in Dumfries, whose archival records omit the names of those persecuted for witchcraft but include details of the cost of wood purchased to implement their torture and execution.

“Re-imagining seven x seven for Glasgow International in 2021, the presentation of work physically and online seeks to draw connections between disparate histories, narratives and geographies of persecution, and to re-humanise some of the individuals, largely women, reduced to horrifying numbers – some 300 in the East of England, some 4,000 in Scotland. Through installation, video, wall and sound works, seven x seven is an invitation to remember and say their names, as momentary gestures of remembrance and resistance to erasure.”