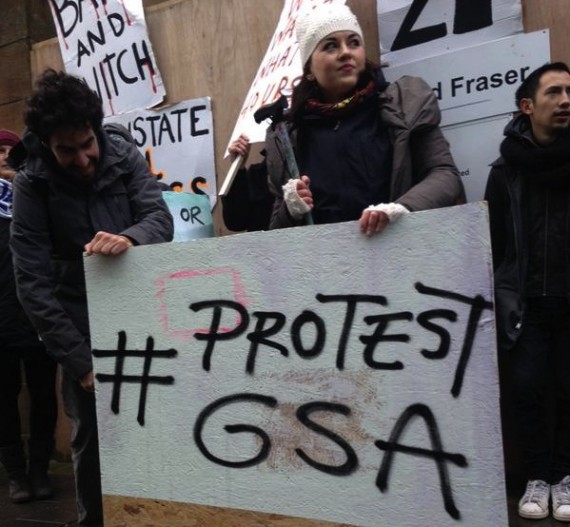 Students on the Glasgow School of Art MFA have staged a demonstration against the withdrawal of 24-hour access to their GSA studio spaces.

Protestors carrying placards with slogans including ‘Artists don’t clock off’ and ‘No to 53% access’ gathered outside the art school’s new Reid Building and fire-damaged Mackintosh Building on Renfrew Street today.

A petition calling on GSA to reinstate 24-hour access to studios for MFA students has attracted nearly 500 signatures. A Twitter account, @protestGSA, has also been set up.

The new hours of access were introduced at the beginning of the 2014/15 academic year. The protestors claim that there was no consultation with students or staff and that MFA students were told about the changes two weeks prior to the start of term.

The petition states: “We now have 53% of the studio access that we were told we would have, and that second year students had in the last academic year.

“The importance of studio time to the culture of the MFA, and the production of exceptional alumni, cannot be overestimated, and neither can the impact of these new opening hours. Already freedom of practice has been dramatically curtailed, periods of assessment have been extremely fraught, and student morale has been decimated.”

The petition goes on to say that attempts over the last six months to negotiate with GSA management have failed: “We now feel that we have exhausted all avenues for dialogue and that GSA management are unwilling to listen to our concerns.”

A statement from Glasgow School of Art cites safety issues as the reason for the reduced access. A spokesperson said: “The safety of our staff and students is paramount. The Glasgow School of Art reviewed the opening hours of its buildings as one of a number of reviews undertaken following the Mackintosh Building fire in May 2014.

“The final revised opening hours were concluded following a period of consultation with both staff and students which resulted in a slight (five hour) reduction in studio opening times and extended opening hours for the GSA Library and Central Workshops.”

The statement continued: “All GSA staff and students are now currently able to access studios from 8am-10pm during the week and 8am-6pm at weekends with extended opening hours operational for Degree Show preparation. These changes are designed to ensure the safety of staff and students and equality of studio access for all students.”