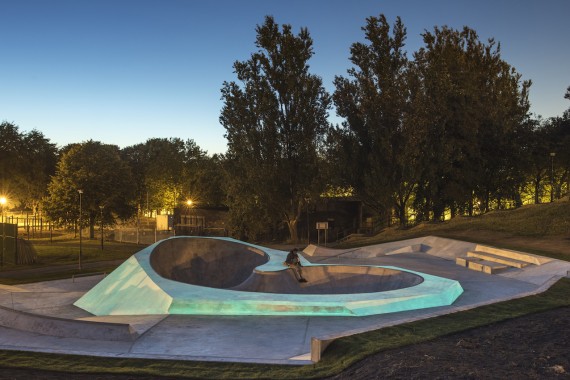 The soft light, the dusty, kidney-shaped curves, the phosphorescent surface that highlights scuffs and scrapes – being in Evertro, a new art commission in Everton Park, Liverpool, is a bit like standing in a moon crater. Or at least, fuelled by decades of reading sci-fi novels, it’s how I imagine being in a lunar landscape might feel like.

The scuffs and marks aren’t made by astronauts, of course, but by skateboard wheels and stumbling feet – for this is one of the deepest skateboarding ‘bowls’ in the UK, designed by South Korean-born artist Koo Jeong A. Geometric angles jut out amongst the smooth curves, interspersed by hand rails and steps – this glow in the dark public artwork incorporates different skate styles, with dedicated areas for beginners and a BMX pump track.

Commissioned by a large group of independent organisations – Liverpool Biennial, Liverpool City Council, Wheelscape Skateparks, Friends of Everton Park, the Land Trust and Liverpool Vision – Evertro is the result of a collaboration that has, according to Jeong A, taken four years to come to fruition.

Jeong A has worked closely with Polly Brannan, Liverpool Biennial education curator, from the very beginning of the project, and the artist is keen to emphasise the long hours and commitment poured into Evertro by the many people involved.

Bringing it all together and getting it built, she says, was an “adventure – inspired by the people you meet, getting to know their life… all kinds of context to use as an adventurous experience.”

Jeong A explains that Evertro is not just about skating; it’s about a collaborative way of working that she terms “poetic relation” – a symbol of exchanged knowledge and skills. The end result? “A beauty spot in Everton Park, that shines and glows in the dark for its people and the city,” she says.

Jeong A studied at the École des Beaux-Arts in Paris and is known for strange, on-site art interventions that creep into the subconscious.

Heidi Zuckerman, director and chief curator during the artist’s residency at Aspen Art Museum in 2007, noted that ‘most of her installations are difficult to see, let alone comprehend… The performative nature of her efforts facilitates the effect she offers, an effect that has been called a “dream space,” a “zone of calm,” and a place to “lose yourself.”’

In Aspen, Jeong A made sound art with local sled dogs; at the 50th Venice Biennale, she filled cracks in two gallery walls with iridescent glass beads (A Reality Upgrade & End Alone, 2003); in Dusseldorf, she washed hand towels with soap in a planned, ‘elaborate’ process (16:07, Kunsthalle, 2012).

That same year, she created OTRO, a luminous skate park commissioned by the Centre international d’art et du passage de l’île de Vassivière, in rural France. Sally Tallant, director of Liverpool Biennial, saw its otherworldly curves and was intrigued. If it worked in the French countryside, why not inner city Liverpool?

Jeong A first met the Biennial team in 2013 and, working with young people from the Shewsy community centre in Everton and skaters from around the city, came up with an initial design for the skate park, to be produced in collaboration with Wheelscape Skateparks.

This was then pitched to Mayor of Liverpool, Joe Anderson. According to the mayor, young people have driven “the agenda on skateparks”; so much so that Evertro is one of four to be built. However, it is the only one that glows.

And that glow, explains Jeong A, is important. In a recent interview, she compared Evertro’s colour to “dressing the deceased in brightness”. She tries to explain further.

“When somebody dies, you dress to bury; from my native Asia, we have great ideas to dress the corpse in brightness, illumination. This light is especially in contrast to the dark in the night [and] this can happen only when it – and we – work together. It is a parallel reality.”

Brannan remembers that the artist said at one point in the process that “Everton deserves to glow”. And now, thanks to all those people who have worked together to make Evertro happen, it does.

A Q&A with… George Barber, video artist – With current shows in Cardiff and London, Chris Sharratt talks to the artist about absurdity, politics and life on board a nuclear submarine