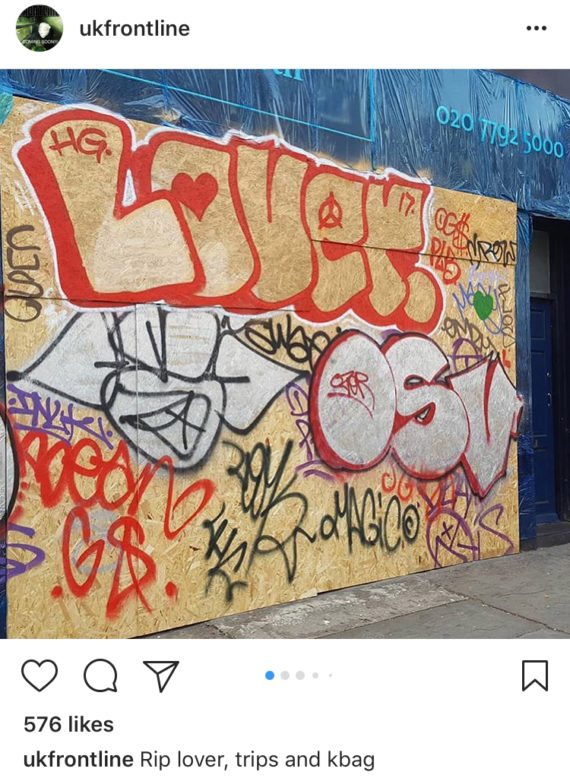 As the Guardian reports, it is believed to be the first multiple fatality of graffiti artists painting illegally since 2007 when Bradley ‘Ozone’ Chapman, 21, and Daniel ‘Wants’ Elgar, 19, were struck by a District line train. They were running away from police who had spotted them painting trains at a London Underground depot near Barking, east London.

Tributes were posted on the Instagram feed of @ukfrontline, an account dedicated to graffiti artists. This included a post which read simply: “Rip lover, trips and kbag”.

In a statement, Mayor of London Sadiq Khan said: “My heart goes out to the families of the three people killed at Loughborough Junction.”

Meanwhile, a former TfL board member has sparked outrage after he posted a tweet on Twitter calling the men who were killed ‘common scum’. Brian Cooke, a former Conservative association chairman in south-east London, said: “Why do @BBCNews @tomedwards keep referring to the guys killed at #LoughboroughJunction as graffiti ‘artists’. They are no such thing they are common scum and criminals who cost the railway millions and keep fares high.”

After @ukfrontline posted a screengrab of Cooke’s comments on Instagram, the response was scathing. @mobbdeepz said: “This is what happens when you give freedom of speech to people who only have hate coming out of their mouths”, while @els.94x added: “How insensitive, and ignorant”.

Campaigners criticise BP sponsorship of Iraq exhibition at British Museum The campaign group BP or not BP? has released statement in response to the British Museum’s announcement that an upcoming exhibition featuring objects from modern-day Iraq will be sponsored by the oil company BP.

A spokesperson for BP or not BP? said: “We are horrified to see a BP logo attached to an exhibition of objects from Iraq. Given the company’s history of supporting and profiting from war in the region, why is the British Museum allowing BP to gain credibility and positive profile from association with the history and culture of Iraq? This will not go unchallenged – visitors will see through BP’s cynical branding of the exhibition and the museum should expect significant protests over this.”

The exhibition, ‘I am Ashurbanipal: king of the world, king of Assyria‘, will explore ancient Assyria and its ruler King Ashurbanipal. Featuring over 200 objects, it will include stone sculptures, carved reliefs, painted glazed bricks and wall paintings.

Beyoncé and Jay-Z video filmed in the Louvre takes art history to task The video for the pop power couple’s new single, Apeshit, was filmed in secrecy in the Louvre Museum, Paris last month and takes in many of the museum’s masterpieces, including Leonardo Da Vinci’s Mona Lisa, Théodore Géricault’s The Raft of the Medusa, and the Venus de Milo.

Directed by Ricky Saiz, the six-minute video includes synchronised dance routines and sees Jay-Z and Beyoncé dressed in a series of visually enticing designer clothes. But while its imagery is spectacular it also makes a political point about the representation of people of colour in western art.

Artist’s portrait of Dana Schulz’s son is response to her controversial painting of Emmett Till The portrait by Hamishi Farah, which was shown at last week’s LISTE art fair in Basel, is titled Representation of Arlo. It is said to be a response to the huge controversy around Schulz’s painting, Open Casket, which was exhibited at the 2017 Whitney Biennial.

Damien Hirst’s former business manager to sell 200 art works Frank Dunphy, who has also worked with artists Jake and Dinos Chapman and Tracey Emin, will auction the work at Sotheby’s in September. The sale will include spot, spin and butterfly pieces by Hirst, plus works by Andy Warhol, Richard Prince, Rachel Whiteread and Angus Fairhurst. The auction is expected to raise over £8m.

Explaining the reasons for the sale, Dunphy said: “Much of it is steeped in happy memories and much of it we bought ourselves simply because we loved it. But time waits for no man and the time has come to say goodbye to some of the art, though not the memories nor the friendships.”

Art dealers criticise European Union licence regulations proposals The planned regulations will require art, antiques and antiquities that are more than 250 years old to have import licences in order to enter an EU country. The changes are designed to fight the funding of terrorism through illicit trade.

However, Anthony Browne, the chairman of the British Art Market Federation, told the Art Newspaper that the regulations would “set levels of due diligence that are unattainable, impose licensing costs that would make a significant part of the market uneconomic and cause lengthy delays that would make the temporary import of goods for exhibiting at fairs impossible”.

One person killed and 22 injured in shooting at New Jersey arts festival According to the New York Times, one suspect was killed, 17 people were shot, and several others were injured after violence broke out between two gangs from the area. The annual All-Night Art Trenton event, which showcases local art, music, and food, was expected to have around 25,000 visitors.