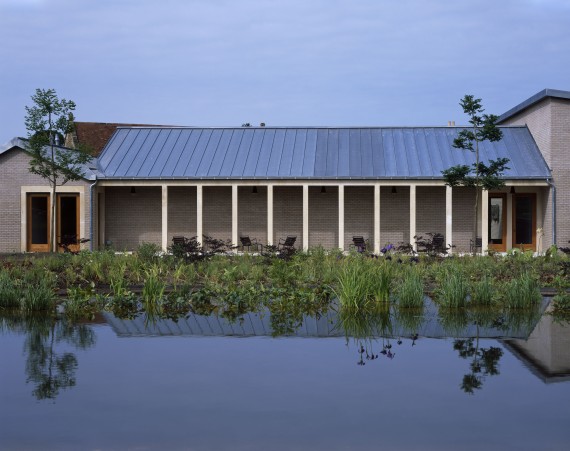 A recent article in The Independent suggested that the gap between the supply of art works and increasing demand from a super-rich clientele meant that galleries had to work harder to hold on to their artists. Hauser & Wirth’s latest project, offering rural residencies and exhibitions of scale in the heart of the Somerset landscape, could just give them the edge.

But far from being a purely self-interested project Iwan Wirth insists that Hauser & Wirth Somerset is a labour of love. Moving to England in 2006 they fell in love with the English countryside, bought a weekend farmhouse in Bruton and settled there in 2010. They then acquired Durslade Farm, but it was only after their artists began asking for residencies there, that the idea for an artists’ retreat-cum-international gallery, art centre, farm shop and restaurant really emerged.

With exhibition, residency and education programmes, it’s clear that the gallery aims to attract a wide range of audiences, from local school children to international art collectors, anticipating 40,000-80,000 annually. Although the numbers are small, reaching this widely is certainly a business model many publicly funded galleries might aspire to emulate – were the resources needed to realise (or even imagine) a vision like this at their disposal.

Joining everything together is a shared passion for art and the idea that art relates to life through food, culture, land and community. The importance of the latter is something they keenly emphasise, to deter the presumption, perhaps, of a global art behemoth descending on a couthie Somerset town.

They have integrated well, involving local people and businesses and framing the venture as a community hub that will benefit the locale by attracting tourism. This, along with diversifying farms, placing art at the centre of rural regeneration and supporting education and youth work align the gallery very closely with Arts Council England’s (ACE) vision for arts in rural areas.

Despite these shared goals, the project sits in stark contrast to much of the visual arts sector; the South West is significantly less funded than other UK regions even with the 5.7% overall increase announced in ACE’s recent NPO funding round, which saw the region’s flagship organisation, Arnolfini, take a 25% hit. It would be easy to feel alienated by the shiny new private sector neighbour, but Hauser & Wirth have been careful to work in partnership and sponsor projects such as Foreground in Frome, providing the project with an annual donation for the past 2 years. In the pipeline are collaborations with Bristol Old Vic, Bath Spa University and the Centre for Contemporary Art and the Natural World (CCANW) whose Soil Culture Residency will see Karen Guthrie become the first artist not represented by the gallery to be a direct beneficiary.

On the question of Hauser & Wirth’s place within the South West’s arts ecology, Director Alice Workman commented: “as a consequence of the lack of major cities there are less contemporary art venues here. What we offer is a privately funded gallery open to the public for free 6 days a week, 100 percent focused on international contemporary art.”

Quizzed about a-n’s Paying Artists Campaign, Workman said that artists shouldn’t be taken for granted, adding: “the perception of artists and their work is completely misguided. People think it’s easy for artists to give up their work, but actually that’s their time, that’s their livelihood.” Herself a native to the region, a connection with the community is personally important to her and it seems the gallery’s efforts here have paid off as the project is being met with curiosity and excitement.

Grace Davies, Director of Visual Arts South West (VASW) said: “Hauser & Wirth have a stable of world-class artists, and the opportunity to see their work is exciting for audiences, professionals and practitioners in the region. We hope that we can support a positive relationship between the new venture and the surrounding arts ecology to develop the growth of world-class visual arts in the South West.”

Simon Morrissey, Director of WORKS|PROJECTS, Bristol, and the aforementioned Foreground, offers a unique perspective having promoted the commissioning and collecting of British contemporary art regionally and internationally for the past 6 years. Foreground has directly benefitted from the gallery’s generosity, but Morrissey is keen to stress that the importance of Hauser & Wirth goes far beyond private patronage.

“The impact of having a major, publicly accessible, critically engaged, contemporary art gallery of international significance emerge as if from nowhere in the rural South West – which in itself borders on the almost miraculous in the current public funding climate – cannot be underestimated,” he said. “But the more subtle and perhaps even more significant impact emerges from a world-leading commercial brand making an unparalleled commitment to invest in a regional base in the UK. That has, in a single step, both connected the region with the centre of the international artworld and broken the almost total concentration of the international commercial sector on London. The effect of both will be fascinating to watch unfold.”

Hauser & Wirth Somerset opens to the public from Tuesday 15 July with GIG, an exhibition by Phyllida Barlow, and works from artists including Martin Creed, Louise Bourgeois and Paul McCarthy on display in the grounds.