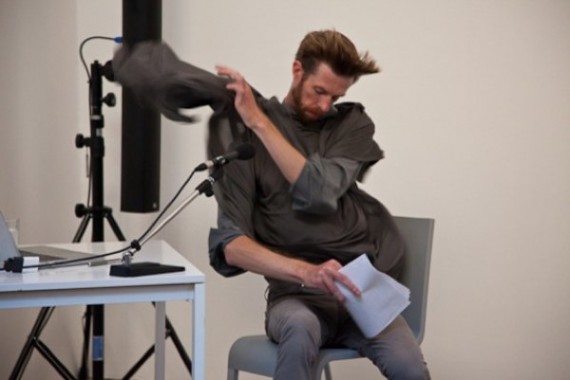 Ian White, who died on 26 October 2013 following a long illness, was an artist, curator and writer known for performance works that “investigate and agitate the relationship between one’s own subjectivity and the structures and codes that determine social life at large” (Catherine Wood, Curator of Contemporary Art and Performance, Tate Modern).

Based in London and more recently Berlin, where he moved to focus primarily on his work as an artist, White’s exhibiting credits include performances at Tate Britain, ICA and Tate Modern in London, as well as STUK, Leuven (Belgium), De Appel, Amsterdam and Tanya Leighton Gallery, Berlin. He also worked collaboratively, performing on several occassions with Jimmy Robert, and with Emily Roysdon on projects at Chisenhale Gallery, London and Tramway, Glasgow. A trilogy of his solo works – Ibiza Black Flags Democracy – was presented at the DAAD Galerie, Berlin in July 2010.

As a curator he was Adjunct Film Curator for Whitechapel Gallery, London (2001-11) and Facilitator of the LUX Associate Artists Programme (2007-present). He also worked on many independent projects including Oberhausen International Short Film Festival, where he most recently curated a selection of works by the Turner Prize nominated artist Laure Prouvost (May, 2013), and The Artists Cinema at the Frieze Art Fair (2005/6). He wrote for numerous publications including Frieze, Afterall, Art Review, Art Monthly and The Wire.

A statement posted on the LUX site said: “We are extremely sad to announce the death of Ian White, our dear friend and colleague, at the age of 41. He had been receiving treatment for cancer for more than a year, but for most of that time had continued to live and work as normal. We know Ian’s death will come as a shock to the many people he worked with as an artist, writer, performer, teacher and curator. His extraordinary intelligence, generosity and fierce integrity marked everything he did and touched everyone he came into contact with.”

Lars Henrik Gass, Director of the Oberhausen festival, added this tribute: “His critical, always alert, original and frequently mordant intellect influenced a whole generation of curators, not just in Great Britain. The development of our festival into a key platform for the discussion of artists’ films was significantly influenced by Ian White.”