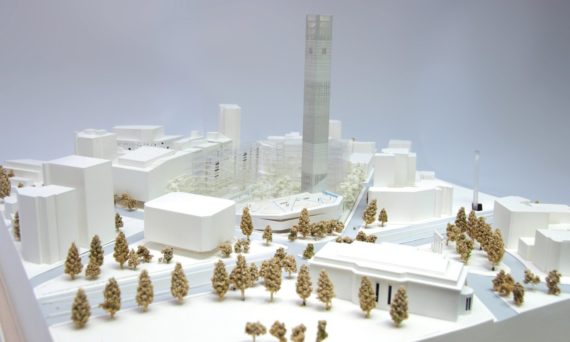 Beirut to build new modern art museum The Beirut Museum of Art (BeMA) will be inspired by Italian campaniles and Arabic minarets and feature a 124-metre tower. The art will be drawn from 2,300 works from the early 1900s to 2015, including pieces by 470 Lebanese artists collected by Lebanon’s ministry of culture. 1,000 works will form the basis of the museum’s first exhibition in 2020.

Anicka Yi Wins 2016 Hugo Boss Prize The Seoul-born, New York-based artist has won the $100,000 prize – now in its 11th year – selected from a from a shortlist of six finalists that also included Tania Bruguera, Mark Leckey, Ralph Lemon, Laura Owens, and Wael Shawky. Yi is known for her collaborations with biologists which see her exhibiting smell as sculpture. Previous winners include Matthew Barney (1996), Douglas Gordon (1998), and Marjetica Potrč (2000).

Cornelia Parker, Stuart Maconie and more on the axing of A-level art history It sparked Cornelia Parker’s career, shaped Yinka Shonibare’s politics and opened Stuart Maconie’s mind to all things unorthodox. Leading cultural voices discuss why children deserve to study art history, with Parker commenting: “I devoured the knowledge and use it all the time.”

Artist Tania Bruguera announces 2018 bid for Cuban presidency The Cuban artist’s  video announcement was released at the Creative Time Summit, a conference focusing on art and social change in Washington, DC. However, since presidential candidates can only be elected by the National Assembly, the video is more of a performance than the start of an actual presidential campaign. Bruguera said: “Let’s start thinking what if we actually had that power.”

‘League of shame’ theatres receive workforce diversity funding Arts Council England’s two new funds aim to increase the diversity of senior leaders in arts organisations and support development opportunities for BME theatre makers. Recipients include two theatres named and shamed by The Yorkshire Post for having a lack of ethnic diversity in their permanent staff who have been awarded funding to improve their workforce diversity.

Divided reception for Doris Salcedo’s memorial in Bogotá Public intervention consisting of over 2,000 pieces of white cloth, sewn together to create a gigantic shroud covering the Bolívar Square, features the known names of victims of violent conflict written over it with ashes. However, while receiving unanimous praise from the press, it also drew criticism from local artists and political activists.

To counter art forgeries, new South Korean law may require galleries to obtain licenses They will also have to keep detailed records of every sale, as well as submit counterfeit prevention plans and lists of the artists they represent. Auction houses will have to meet certain qualifications, including having a professional auctioneer, a physical location, and at least $180,000 in capital.