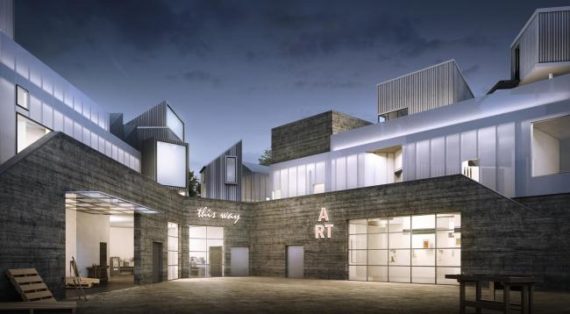 Gallery and studio spaces planned in West Somerset regeneration The East Quay in Watchet is set for a multi-million-pound development, including workshops, ten artist studios and a gallery. The Foundry project, from Invisible Studio architects, is also expected to create 20 new jobs including around eight new jobs in the harbour-side café and restaurant.

Modern-day Monuments Men wanted by the British Army The ministry of defence has tasked the army with creating a specialist cultural protection unit to protect cultural property wherever its forces are deployed. The army, as well as the navy and air force, is looking to recruit between 15 and 20 people, such as archaeologists, with the ‘specialist knowledge that the military lacks on the front line’.

France joins international treaty to protect cultural heritage in war zones The French government will join an international treaty aimed at strengthening protection for cultural heritage in war zones, 17 years after it was adopted in the Hague. The turnaround in France’s position came after the attacks by Isil extremists on the Mosul Museum and the ancient city of Nimrud.

Guggenheim Museum proposal rejected in final vote Helsinki City Council has decided to not move forward with the building of a Guggenheim Museum on the city’s shorefront. In a final vote, 53 council members were against the museum and only 32 in favour, the city rejecting the project due to financial concerns.

Malaysian political cartoonist faces up to 40 years in prison for allegedly creating ‘defaming’ works Zulkiflee Anwar Ulhaque has been charged with nine counts of sedition and is forbidden from leaving the country for works featuring Malaysian prime minister Najib Razak. The artist says that the charges have nothing to do with the law and that they are politically motivated.

Art world heavyweights protest over fate of New Art Gallery Walsall Leading figures in the British art world, from Grayson Perry to incoming Tate Britain director Alex Farquharson, have written a letter to the Guardian protesting against the potential closure of the gallery in the West Midlands.

Northern Renaissance painting repatriated by France to heirs of Jewish couple The work, attributed to the 16th century Belgian artist Joos van Cleve or his son, Cornelis van Cleve, was sold under duress by Hertha and Henry Bromberg in Paris before the start of the Second World War. It has been returned to the Brombergs’ grandchildren, Henrietta Schubert and Christopher Bromberg, by the French government.

Iran pulls the plug on Tehran art exhibition in Berlin An exhibition of artworks from Tehran’s Museum of Contemporary Art, due to open at Berlin’s Gemälde Galerie next month, has been indefinitely postponed because the Iranian authorities have failed to allow the paintings to leave the country.