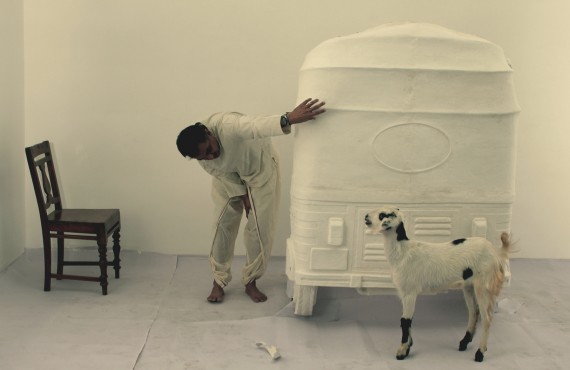 India is a country with a unique and vibrant culture that draws millions of visitors every year. But with the tourism industry’s focus on cultural heritage, the happenings of the country’s contemporary art scene are rarely delved into.

Yet just as India’s economy is growing rapidly so too is the country’s contemporary art scene. Central to its activity, a small number of independent organisations are encouraging contemporary artists to push the boundaries of their practice. However, with no government funding or arts council support available, how are many of India’s core organisations able to sustain an open and supportive approach to the development of contemporary art?

Providing space for collaboration, experimentation and conversation, these small but active organisations have become the vital arteries feeding the development of contemporary art in India. One of the longest standing of these spaces is Khoj, which, with no models of experimental art spaces to emulate, has helped to forge a path for other organisations to follow.

The idea of Khoj started in 1997 as an annual workshop, before later putting down roots in the New Delhi district of Saket. Here, it has established itself as a central organisation in the development of experimental, interdisciplinary and critical contemporary art practice in India.

Khoj’s 2014 residency, Of Games – II, selected five artists to take forward Khoj’s interest in interdisciplinary art practices by exploring the ideas of game and play through the lens of contemporary art. Visitors during the residency would have mostly seen artists drinking contemplative cups of chai while discussing ideas and scribbling their thoughts on colourful post-it notes which adorned their temporary residential studios. But each residency ends with an open studios event when local artists and supporters are invited to explore the resident artists’ finished work.

Khoj provides a space away from the formal academic institutions and commercial gallery system and throughout its existence has challenged established thinking about art. This makes it almost impossible to attract any kind of financial support from the government for the work they do.

“Receiving funding from the Indian government for the experimental forms of contemporary art that Khoj supports would be challenging,” explains project manager Sitara Chowfla. “Instead, Khoj has opted to seek government involvement for other aspects of its mission, such as the capacity-building arts management initiative ATSA (Art Think South Asia).”

Raising funds remains a constant challenge for Khoj, but the organisation has found that the key to survival is active and persistent research into the next possible funding opportunity and to never solely rely on one source.

Khoj sustains itself through a variety of funding routes: international trusts or foundations, some of which may offer project support; Indian grant-making organisations who are likely to fund a particular project or artist; and through their extensive network of private patrons who support specific projects at Khoj or donate to the organisation’s trust.

The development of their patron scheme has been one of the toughest challenges Khoj has faced. Their experience has taught them that it is important to actively approach like-minded individuals and organisations with whom they’ve worked, with the aim of building a stronger culture of philanthropy in the arts.

Through continued efforts to encourage the support of arts practice as an important aspect of everyday life, Khoj is leading the way in art philanthropy and breaking new ground. The hope is that this will make the future of fundraising less of a challenge for art and culture organisations across India.

And, longer-term, the possibility of state funding for its wider initiatives hasn’t been ruled out. “We are hopeful that in future years there are meaningful opportunities for receiving support from the government for many of our programs and activities,” says Chowfla.

Situated over 1000 miles south of New Delhi in the south western state of Karnataka, the city of Bangalore has risen in recent years to become one of India’s cosmopolitan metropolises. But for those who delve deeper into this bustling, corporate city, they will also find an internationally respected and vivacious art scene.

Playing a central role as the city’s creative hub is No.1 Shanthi Road, a space where the local and international arts community gather for critical discussions, to attend events, exhibit their work or just catch up over a cup of chai. Founded in 2003 by Suresh Jayaram, Shanthi Road has developed a strong focus on international residency programmes, boasting partnerships with organisations including The Goethe-Institut – with whom they work with on the bangaloREsidency project – the Asia New Zealand Foundation and the Triangle Network, an international network of artists and arts organisations.

On a typical day, the current artists-in-residence at Shanthi Road will gather in the central courtyard for a communal lunch. While it hosts artists from a variety of nationalities, all are encouraged to engage the local community in their activity.

During November 2014, German artist Nora Bibel undertook a bangaloREsideny at the space, exploring the sacred Hindu institution of the joint family when three or more generations live under one roof. Through a local newspaper advertisement and with the help of a translator, she took a series of joint family photos staged in the living rooms of the families. During the final exhibition, each participating family were given their own framed picture.

Like Khoj, Shanthi Road has a strong network of supportive artists and patrons who have contributed greatly to the space, some financially. Many more have become involved by attending events, engaging in ongoing dialogue and, perhaps most importantly, providing moral support for an organisation that, despite playing an important and unique role, still struggles to sustain itself financially.

“Our motto is to keep our overheads low,” says Jayaram. “We have passionate unpaid volunteers to help, and my own family has generously donated the space which I built from a bank loan. My greatest advantage is the location and the low rental.”

Actively creating and maintaining a diverse and varied support network is key to the survival of small independent organisations across India. This is not only important for visitor figures or audience diversity but also for the skills and expertise they can bring and, during those moments when money is tight, the financial support they can offer.

“Our patrons and artists have contributed for our survival and our major source of income is project funding and residency rentals,” explains Jayaram. “We do not have a corpus fund but do envisage raising an amount for the future.”

Despite the tough financial realities, Shanthi Road is nevertheless proof that a small independent organisation’s support network doesn’t have to be limited to a local or even national scene – it can reach out on an international scale, too.

In recent years, India has seen a growing number of independent artist-led initiatives, providing a facilitation space for creative professionals of different disciplines to come together for productive discourse and creative action. The CONA Foundation in Mumbai is one such relative newcomer. Founded in 2012 by Hemali Bhuta and Shreyas Karle, CONA has already welcomed numerous national and international resident artists and has been welcomed into the Triangle Network.

Preston-based artist Rebecca Chesney undertook a Triangle Network-funded residency with CONA at the end of 2013. “I loved being at CONA – it was good to see how a small organisation can survive,” she says.

“They are very resourceful. Most artists in India hope to find commercial gallery representation to be able to sustain their practice, so it is refreshing to see artist-led initiatives surviving and working in a different way. Both Shreyas and Hemali have gallery representation, so the system is entwined.”

As India’s commercial capital, space in Mumbai is at a premium, leaving creative organisations and artists who wish to keep costs at a minimum to flock to the city’s residential suburbs such as Borivali, where CONA is based. In a further cost saving initiative, Bhuta and Karle have combined their home, studio and CONA into one space.

“The reason why CONA and our living apartment and studio share the same space is because of the easiness in operation,” they explain. “In terms of its sustainability there are times when we end up paying the rent on CONA’s behalf as the funds that come in get dried up.”

Set in a quiet residential area, at first site CONA does appear more like a home than a project space. But it is this residential setting that provides its special charm and perhaps contributes to the relaxed atmosphere that makes it feel like a creative retreat.

CONA chooses to operate in a state of constant fluidity, attempting to avoid being labelled as an alternative visual arts or project space. Instead, it engages in a flexible and responsive way with its location, audience and ideas. To think about sustaining might, believe Bhuta and Karle, lead to compromise, and it is CONA’s fluidity as an organisation that prepares a neutral ground for creative exchange and nurturing of ideas.

This conscious choice does make gaining long-term funding a difficulty, leaving CONA swinging from funding branch to branch, grabbing what they can as they define their next project.

“We do not want to live with the idea of sustenance, but the moment a space starts sustaining it begins to institutionalize itself; although we do have a manifesto and know what we are doing,” they add. “The overlapping spaces of CONA and our home/studio always reminds us of the balance of what we are and what we are supposed to do; it helps us keep our heads high and feet grounded.”

India is a complex and multi-layered country with so many unwritten rules that, despite the innovative and forward-thinking approach of the country’s independent contemporary art spaces, they still face a constant struggle to survive financially and in turn to provide the much-needed support that emerging artists require.

While the development of the country’s contemporary art scene continues to rely on the tenacity and ideas of Indian artists, curators and organisers, a growing international awareness is also supporting its growth. Over the next three years, the British Council and Arts Council England’s Re-Imagine India project will offer financial support to promote exchange and collaboration between artists, arts organisations and museums in India and England, while attempting to expose the complexity of layers within this diverse country’s culture.

Here in the UK, as an arts community with a well-established system of public funding for the arts, the constant struggle for financial survival that India’s independent organisations go through may seem far removed from our everyday experience. But as budgets have been reduced and with further cuts expected, there feels a need to be a little more entrepreneurial in our approach to fundraising.

And, with such diverse and wide-reaching support networks, perhaps we can learn a lot from the innovative and resourceful approach of India’s contemporary arts organisations.

Emma Sumner is a freelance artist, curator and writer who undertook an extensive research trip through India at the end of 2014, supported by Arts Council England, investigating the country’s independent art scene and emerging artists.