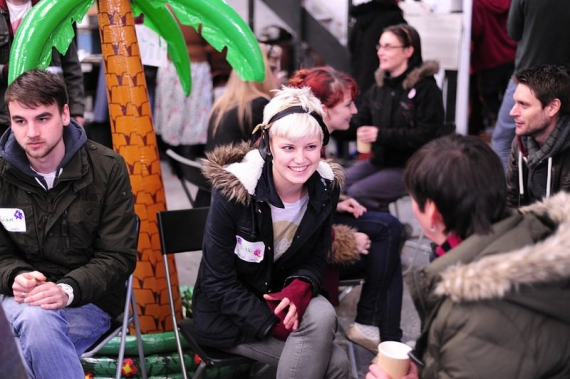 The sudden nosedive in temperatures in Bristol on Saturday 17 November meant that it was tough in the unheated Z Shed from around 4pm onwards, and the need for the steaming hot food dished up by Motorcade/ FlashParade at 6pm was palpable. It all seemed like a metaphor for the tough climate of artist-led practice, sustained largely by what we do for ourselves.

Nonetheless, interest and energy was maintained across the 2-8pm day, fed not only by the ongoing, rich and diverse contributions from the 25 artist-led organisations involved in this collaborative, artist-led event, but also by the genuinely open conversation and desire to share knowledge and make links.

INTERPLAY 2012 arose from Bristol collective Hand in Glove’s own perceived need to research other models of collective artist-led practice more widely. They discovered that they were “not alone in wanting to meet other groups, exchange knowledge and share ideas”. This was confirmed by the distance travelled by many participants– including Back Lane West – as well as the large number of groups attending.

A surprising amount of knowledge exchange and sharing of ideas was accomplished through the format of Pecha Kucha – a six minute presentation accompanied by up to 20 images. Ten organisations – including Back Lane West – managed to cram a useful account of their activities, aims, and even problems, in only marginally over the six minutes.

The range of activities presented by the other 15 groups/organisations was impressive and engaging, and most were accessible at different points. For example, Topical Jungle’s speed dating – fast but useful conversations that took place around their blow-up palm-tree island – could be sampled at any time within two separate hour slots.

Other contributions were active throughout, such as 12:34 Gallery’s Snowball. Based on George Orwell’s Animal Farm, this consisted of real, bloody pigs’ heads presented on plinths and available for collaborative tattooing interventions. I loved Cerbyd’s email-based ‘role play’ presentation on the difficulties of distance collaboration, while Camper Obscura was located just outside the big open doors of Z Shed and took Polaroid shots for the record of visiting participants.

One of the most interesting events of the day was the ‘long table discussion’, hosted by Sarah B of Meantime, Andre de Jong of Vinyl, and Louisa Fairclough of Mezz. The format allowed for an additional audience that could simply listen, or act as an exchange pool for the seats and join in. It is a format we’ll use as it enabled many to participate in the discussion. But this event also acted as a reminder of the need for a visible forum for artist-led collective practice to raise and communicate its critical awareness and discussion, as well as showcase its activity – a shared digital publication perhaps?

This event comes at a time for Back Lane West when we too want to develop our links and create a programme of collaborations and exchanges both within our large South West region and nationally. We have been working to establish an artist-led community for three years, and wider collaborations are certainly the way to now develop Back Lane West’s new aims to connect that community more widely, and to provide collaborative routes and pathways in both directions for artists’ professional development. We are already planning for a similar international project for 2015. These ambitions need funding of course, but we are realising that without a forward motion of development, energies and interest will stagnate and soon dissolve.

In terms of our ‘rural’ status: although Cornwall is fairly distant from larger centres of population, and we also have transport issues within our own area, we have a greater pool of engaged artists and audiences than many other rural areas. We are realising too that our rural position can actually be an advantage.

Firstly, Back Lane West is one of a relatively small number of artist-led spaces in this widely spread county, and it therefore provides a well-subscribed hub and meeting point. Secondly, several urban-based, artist-led projects – including some that were at the INTERPLAY event – are interested in collaborative/exchange projects between urban and rural groups/spaces specifically, as we are ourselves. Both partners can provide a different focus and engagement for the other, as well as routes of mobility between our different constituencies.

This event was energising for us and created an egalitarian atmosphere of possibility and self-determination. We now need to make sure we make use of the possibilities, and we look forward to more INTERPLAY events in the future – hopefully warmer ones!

A full list and details of all the participating organisations can be found at handinglove.org.uk