Jeremy Deller in Venice: banners, murals and a tour of England - a-n The Artists Information Company 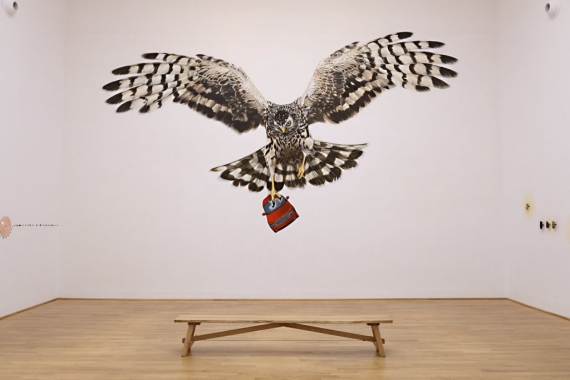 Jeremy Deller’s British Pavilion presentation for the 55th Venice Biennale, English Magic, strikes an anti-establishment note, celebrating the UK’s socialist and folk history while taking aim at the invasion of Iraq and its legacy, tax avoiding millionaires and the bling lifestyles of art-buying, globe-trotting billionaires. Deller said the exhibition, commissioned by the British Council, reflects his “love-hate relationship” with the country.

Two blue banners outside the pavilion bear the words ‘I searched for form and land’ and ‘For years and years I roamed’, lines from the David Bowie song The Man Who Sold The World. They are positioned either side of the pavilion’s main entrance and the ‘Gran Bretagna’ inscription above its door.

Inside, a series of large murals commissioned from other artists depict scenes such as Roman Abramovich’s yacht being thrust into the sea by a giant-sized depiction of the 19th century radical and writer William Morris (We Sit Starving Amidst Our Gold), the banking district of St Helier, Jersey, in flames (St Helier on Fire 2017) and a swooping hen harrier clutching a Range Rover (A Good Day for Cyclists). The latter references an incident in 2007 when two of the protected birds were killed on the Sandringham estate when Prince Harry and a friend were out shooting.

Elsewhere, Deller presents a gallery of images from prison inmates who are former soldiers, examining the aftermath of the invasion of Iraq and including portraits of Tony Blair, Alistair Campbell and Dr David Kelly.

Thanks to the support of the Art Fund, Deller’s show will tour England after the Biennale finishes on 24 November. In 2014 it will go to the William Morris Gallery, London, Bristol Museum and Art Gallery and Turner Contemporary, Margate.