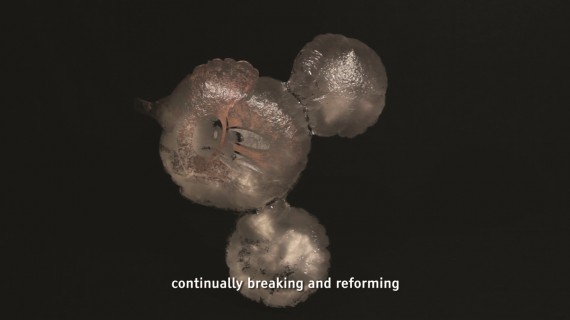 Moving-image artists Karen Kramer and Alice May Williams have been announced as the winners of the Jerwood/FVU Awards 2016. They each receive £20,000 commissions to develop ‘significant new film projects’ in response to this year’s curatorial theme, ‘Borrowed Time’, reflecting on the uncertain nature of our contemporary economic and ecological situation.

The winning proposals both reference ruined or developing architectural sites. Kramer, who graduated from the MFA Fine Art course at Goldsmiths, University of London in 2013, will produce a work depicting the collapsed atomic plant of Fukushima in Japan, a sinister presence in the landscape that acts as a reminder of our fragile relationship with our surroundings.

Williams, who is also a graduate of MFA Fine Art at Goldsmiths (2014), will use the architectural hulk of London’s Battersea Power Station as a platform to consider the various hopes and dreams that have been associated with the riverside site.

Kramer and Williams will now develop their projects over the next 10 months with support from Film and Video Umbrella (FVU). The completed works will premiere at Jerwood Space, London in March 2016, before touring to CCA, Glasgow, later in the year.

Now in its third edition, the Jerwood/FVU Awards support moving-image artists in the first five years of their practice, and are a collaboration between Jerwood Charitable Foundation and Film and Video Umbrella (FVU) in association with CCA, Glasgow.

This year’s winning artists were selected from a shortlist of six, chosen from over 250 applications by a panel comprising: Steven Bode, director of FVU; Shonagh Manson, director of Jerwood Charitable Foundation; Francis McKee, director of CCA, Glasgow; Marianna Simnett, winner of the Jerwood/FVU Awards 2015; and Sam Thorne, artistic director of Tate St Ives.

Speaking about the selection process, Thorne said: “The submitted work was as strong as it was varied. It made me excited for the future of moving-image work in the UK – a future that these awards have already done so much to support.

“I was particularly impressed by Karen Kramer’s extraordinary use of sound and text, and by Alice May Williams’ playful exploration of online imagery.”

Speaking of her experience as a winner of the awards in 2015, Marianna Simnett added: “The Jerwood/FVU Awards have taught me to stop discarding the impossible. My ideas were listened to, challenged and realised.

“It gave me the support I needed to involve others on a journey which I’d previously led alone. It’s an unforgettable experience for anyone working with moving image.”

Jerwood/FVU Awards 2015: What will they see of me?, featuring new works by Lucy Clout and Marianna Simnett, is currently at CCA, Glasgow until 12 July 2015. JerwoodFVUawards.com