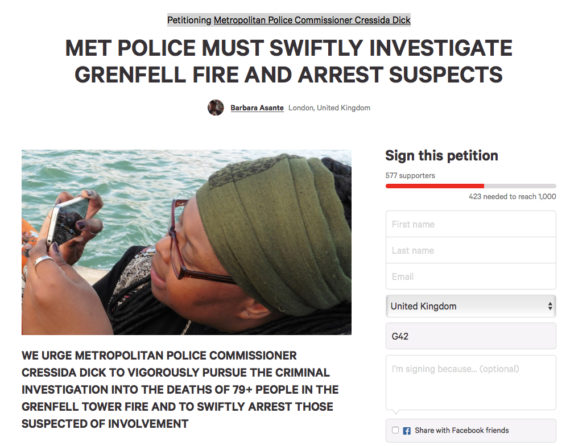 Artists and colleagues of Khadija Saye, the Diaspora Pavilion artist who died in the Grenfell Tower fire, have demanded justice for all victims of the fire with a call for Metropolitan Police Commissioner Cressida Dick to vigorously pursue the criminal investigation into the deaths, and to arrest those suspected of involvement.

Writing in a petition at change.org and letter published by the Guardian, the call is signed by Diaspora Pavilion organisers, artists and mentors including Larry Achiampong, Kimathi Donkor, Ellen Gallagher, Isaac Julien and Barbara Walker.

The letter states: ‘How many days have now passed since the horrific night of Wednesday 14 June, when at least 79 were killed in London’s Grenfell Tower fire? In that time, how many incriminating emails and documents may have been deleted or shredded?

‘We are concerned that, up until now, and as far as we are aware, there have been no arrests, seizure of documents, sealing of offices or freezing of accounts. It took two days for arrests to be made in the 2004 Morecambe Bay disaster, and one day only in the 2012 Costa Concordia sinking. Both led to successful prosecutions.’

The letter concludes: ‘In solidarity with the local residents, the Fire Brigades Union and others, we are resolute that action be delayed no further.

‘This must happen now to avoid repeating the legal travesties and the long-suffering pain caused to those involved in the Hillsborough and Stephen Lawrence scandals. We demand immediate action in pursuit of justice for all those killed in the Grenfell Tower fire.’

Saye lived on the 20th floor of Grenfell Tower with her mother Mary Mendy who also perished in the fire.

In memory of Khadija Saye

In memory of the artist, last week Tate Britain put on display one of Saye’s photographic works, Sothio (2017), a silkscreen print from the series Dwelling: in this space we breath which is currently being exhibited at the Diaspora Pavilion in Venice.

In memory of Khadija Saye and all who lost their lives at #Grenfell Tower on 14 June 2017.
Sothiou, 2017. Now on display at @Tate Britain. pic.twitter.com/640pzG0VYi

Two memorial funds have been launched in Saye’s memory, with both raising funds through justgiving.com.

The Khadija Saye Memorial Fund is being set up by Saye’s mentor and friend Nicola Green along with Dave Lewis and Peer UK director Ingrid Swenson.

The fund’s target is £50,000. It aims to to support young artists to realise their potential and will be will be used for study, informal training, internships or mentoring for those ‘whose background and circumstance might not necessarily grant them access to such support’.

The organisation Creative Access has launched a crowdfunder to raise £10,000 for internships to encourage young BAME people from disadvantaged backgrounds to pursue a career in the arts. Through Creative Access, Khadija secured a role as an intern from July 2015 to March 2016 at London-based arts charity, Peer UK.