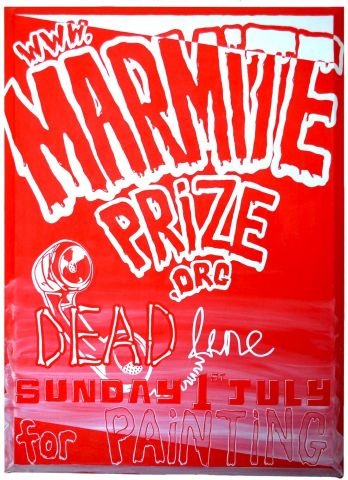 The Marmite Prize for Painting is a biennial touring exhibition and catalogue that champions the artist-led, the co-operative spirit and the DIY approach. It also confronts the problem of placing value on art – rather than awarding cash prizes, a handmade trophy (the ‘marmite’, a traditional cauldron-like pot) is offered to the winner as ‘a symbol of exchange’. The entry procedure is promoted as ‘fair and just’ and is open to all.

Judges for the 2012 edition – Iain Andrews (a-n Magazine cover artist, May 2011), Marta Marce, Dawn Mellor and Tim Stoner – are all established painters. The specially commissioned prize is being made and donated by Richard Wentworth.

“Richard is a very generous man who seems to be genuinely interested in what the new generation of artists are up to,” says Marcus Cope, one of the founders of the prize. “We asked him to make the prize because we thought his ethos was similar to ours. The role of the artist is vital to us, not just in the selection of the prize-maker but at all levels, and we only ever have artists selecting the winners.”

The selection process is anonymous, with no CVs or biographies admitted. A committee comprising Cope, Marmite Prize co-founder Stephanie Moran and representatives from each gallery hosting the show selects a longlist of artists for the catalogue and a shortlist of artists for the exhibition. This year the show will go to: Central Art Gallery, Tameside; Mackintosh Museum, Glasgow School of Art; Ruskin Gallery, Cambridge; The Gallery at Plymouth College of Art; and Tannery Arts at The Drawing Room, London. The judging panel will select a winner and two runners-up during the London leg of the tour.

Cope admits that the choice of name – alluding to the mixing of diverse practices, the alchemy of the process of making – wasn’t a strategic one. And it certainly had nothing to do with the food product of the same name.

“When we started the prize it was intended as an alternative format for group shows. We never thought we would continue it, in fact it was really driven by demand from painters. As a result we were kind of stuck with this name that we had come up with over a bottle of wine one evening!”

So, no plans for a corporate tie-in with the spread you either love or hate? “We really value our independence,” says Cope. “It means we can respond to what artists want while having fun redesigning our own ideal art prize each time.”

Deadline for submissions to the fourth Marmite Prize for Painting is
Sunday 1 July.
www.marmiteprize.org