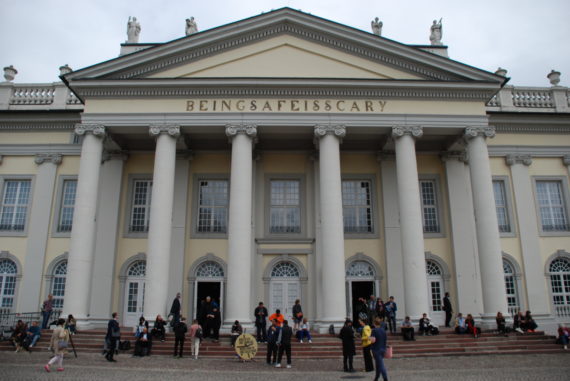 Here is one example, noted by artist and a-n Documenta travel bursary recipient Morag Colquhoun in her a-n review: “On a nearby concrete pillar, an unexpected installation of paired gelatin silver print photographs … created by Algirdas Seskus in Lithuania between 1975 and 1985. In the caption, Seskus states: ‘The second world war was not over for us until 1990 when the Soviet Occupation came to an end’.”

The foregrounding of work concerning the second world war reflects a desire of the Documenta curatorial team, led by Adam Szymczyk, to highlight the issue of German war crimes as part of its controversial decision to mount the show in Athens as well as Kassel, the small German city that has hosted it since 1955.

A prominent example of this is Zafos Xagoraris’ The Welcoming Gate at KulturBahnhof, a former underground station, in which the word ‘hello’ appears on a reconstruction of the gate at Görlitz concentration camp, where 6,000 Greek prisoners-of-war were transferred. (A short informal interview I made with the artist talking about the work can be heard here.)

Although none of the a-n bursary recipients actually visited Athens, their response to the curatorial theme was mixed. “Everyone that I did speak to who had visited Athens actually had pretty positive things to say about it,” explains Mat Do, while Colquhoun writes: “’Learning From Athens’ [was described by former Greek finance minister Yanis Varoufakis] as ‘extractive’ and [was compared] … by way of example, to recent EU/German privatisation of Greek airports.” 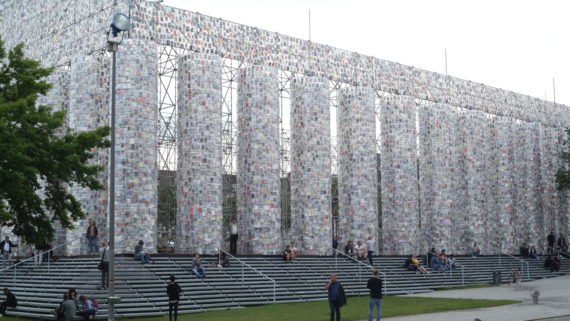 In writing about the “vast array of artwork on offer”, Philip Cornett opted for a travel diary format: “10:29 in the Fridericianum, there was a queue outside to get in, which didn’t bode well. Lots of people around, mostly all taking quick snaps of the work and moving on. Instagram must be in overload.”

Freya Dooley described the process of navigating Documenta as “Hopping channels, venue to venue, piecing together fragments of a narrative, or not”.

And then there were the maps: a condensed (free) map, a fuller paid-for version of the condensed map, and a third contextual map needed to make sense of the other two maps, all hilariously documented in Do’s verbatim report from the Press and Visitor Centre.

No one, though, could entirely forget the politics in a quinquennial that focused on “themes of resistance, protest, politics, nationhood and identity”. Documenta 14 wears its political heart firmly on its collective sleeve, intentions signposted in the central image of the Parthenon of Books by Marta Minujín, a work that “screams quick hit art as statement spectacle”.

While some of the artists produced in-depth critiques in their coverage of Documenta 14, others gave more concise, personal reactions. All seemed equally engaged and stimulated, as well as grateful to a-n for the funding that made it possible.

The installation’s operetta format and the juxtapositioning of the horrors of an Israeli internment camp with a ‘hymn’ to the many prototypes of entrepreneur Sir James Dyson, produced “a scathing critique on bigots…combin[ing] the perfect amount of comedy [and] absurdity”.

Theo Eshetu’s Atlas Fractured – “one of the largest works on show; mythology and propaganda overlap via projection mapping, which I found engaging” – also gathered favourable reviews with its superhuman scale and multilayered imagery where ‘giving is not an investment’.

Sámi artist Marét Ánne Sara’s look at the mass culling of reindeer in her native Norway, displayed side-by-side with historic documentation of a buffalo culling in Western Canada, exemplified a polemical style of art-making that is prevalent throughout. 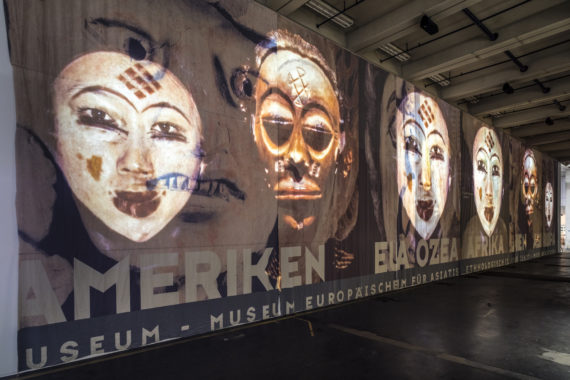 Other examples include Khvay Samnang‘s Preah Kunlong, a three-channel video installation described by Cornett as “…a fantastic viewing experience… I sat through over three viewings of the video without realising”. Rosalind Fowler neatly described how she “realised the importance of the work in disrupting non-indigenous understandings of the landscape and contested spaces under environmental threat…”

Ben Russell’s film Good Luck highlighted “the fragility of workers’ lives” in Serbia and Suriname as they mine for precious metals, parts of the film being “overtly staged” to remind us perhaps of the filmmaker’s “subjective gaze”.

Irena Haiduk’s multiplicity of works spring from a central construct – the incorporation of a fictional company Yugoexport, producers of 1,000 pairs of women’s shoes available for sale and an additional 1,000 pairs worn by Documenta staff.

The output of this woman-as-corporation also included multi-layered installations and city-wide performances of Spinal Discipline, in which a self-proclaimed ‘Army of Beautiful Women’ paraded through the streets with, as Hannah Elizabeth Allan describes, “copies of Proust works balanced on their heads”.

Yugoexport is modelled on “the self-managed factories and experimental clubs of the former Yugoslavia” and began from a conversation between the artist and a former leader of the Serbian Otpor! student movement, Srđa Popović, now a consultant at Harvard.

The recording of this encounter became the basis of the sound piece Seductive Exacting Realism (SER). The bursary bloggers’ reactions to the various aspects ranged from “(an) understated intervention in the everyday” to “Retro commie chic ‘disaster tourism’ fashion maybe but they feel good to wear…”.

Overall, film works seemed to dominate the gaze, with some of the bloggers opting to cover less ground and experience entire film programmes, rather than attempting to access as many works as possible by hurrying from venue to venue. 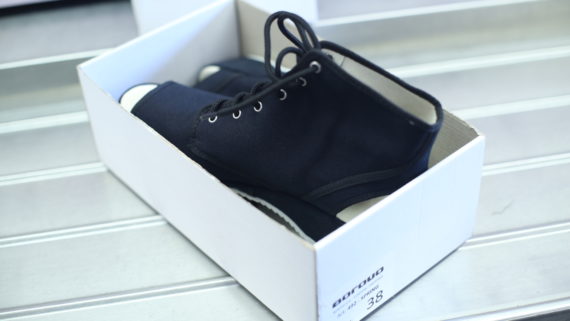 As a sound artist, I was disappointed to find that the audio works in ‘Listening Space’ – a joint initiative between Athens and Kassel – did not feature in any of the blogs, reflecting perhaps the continuing ‘fringe’ nature of sound practice within contemporary visual art. And while sound featured as a constituent component in Susan Hiller’s Lost and Found (2016), it gathered mixed reviews, from “a powerful work that should not be missed” to “aesthetically the work felt very ‘retro’ with an 80s-style green LED wave pulsating on the screen.”.

For Elizabeth Turner, “the Neue Galerie seemed to hold keys to the whole event with a selected exhibition of art from previous Documenta festivals and also from the Galerie’s collection”. She added: “The artworks here provided ways in to some of the main themes of the festival … underpinned by the Syrian war and migration across Greece and into Germany, many … explored ideas of conflict, journeys and seeking connections across different cultures.”

Rosalind Fowler summed it up thus: “As I look back over my Documenta experience, I realise that it is the work made in social contexts that benefits locals in some way as well as artists that made the most lasting impressions on me.” This ethical approach to viewership reflects many of the artist bloggers’ concerns that the curatorial theme was often a hindrance to the experience of the artwork rather than a positive framing of it.

Pertinent to this is Chris Paul Daniels‘ observation: “The provocation in the curatorial theme that something is to be learnt from Athens … can often creep in to overshadow interpreting the individual works on their own merit.” He reinforces this by adding: “Once I stopped trying to decipher the curatorial approach and enjoy each of the works I had a better experience.”

Furthermore, the lack of site-specificity, noted by Pat Naldi, provided a key to understanding that the work presented in Kassel has not been embedded in the buildings and streets of the locality, as previous iterations have successfully attempted. Examples of this embedding being “7000 Oak Trees (1982) by Joseph Beuys for Documenta 7, and The Vertical Earth Kilometer (1977) by Walter De Maria for Documenta 6”.

Naldi continues: “All too often curators and artists overlook the fact that great spaces do not make great work. This tenuous relationship – and in some cases a complete disregard to its site – confirms the contextual disconnect, and feeling of cultural over-imposition [of] these blockbuster exhibition[s].”

In the end, it seems, the individual art works at Documenta 14 are more important than the sum of their parts.