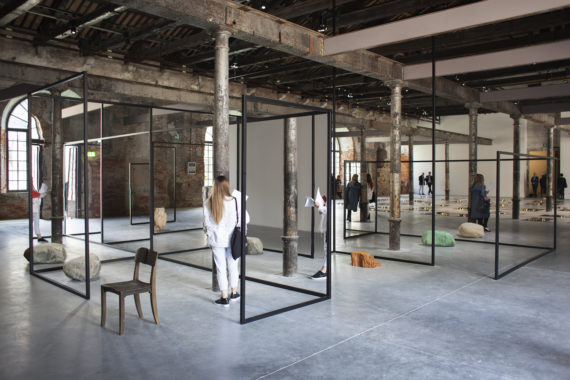 This summer, the Venice Biennale became more prominent in the UK media when we learnt that Khadija Saye, whose portraits ‘Dwelling: in this space we breathe’ are on show in the highly regarded Diaspora Pavilion, had tragically died with her mother in the Grenfell Tower fire. The Venice Biennale is often cited as the ‘Olympics of modern art’ and the loss of Khadija’s life and potential as an artist was acutely felt by an artistic community who had been celebrating its visibility in Venice.

The Diaspora Pavilion impressed almost everyone I encountered, with its confluence of cultural references, sounds and materials. The opening party was unexpectedly popular, running out of catalogues and drinks. AIR Council member Libita Clayton’s Typical Political – a domestic riot needed to be repaired from dancing footprints the next day, but the pavilion left everyone talking about how powerful and important the show is, tweeting and telling fellow Biennale visitors that it ‘was a must see’. As I write, the current visitor count to the pavilion is 25,000. 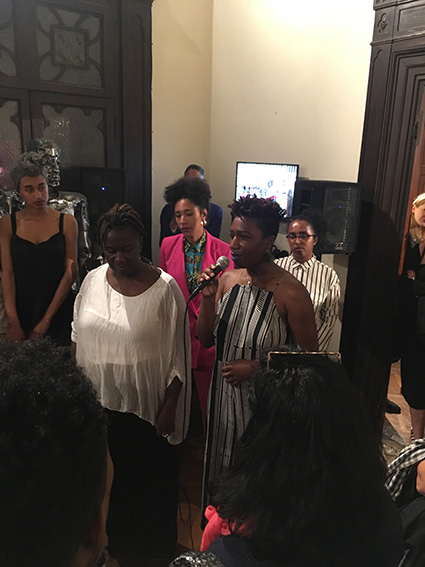 Venice Biennale bursary recipient Raju Rage honours Khadija’s work and legacy in his excellent Venice Biennale 2017 Review, writing: “The importance of these portraits is self-evident, in capturing the artist and her mother’s relationship, which will now be embedded in our minds and cherished in our hearts. Most of all, the Diaspora Pavilion is a testament to the diversity of practice of diaspora artists, which goes beyond the Venice Biennale.”

The themes explored throughout the works in the Diaspora Pavilion touched on being human and humanity, crafted from the unique perspectives of 19 artists. Organised by the International Curators Forum and University of the Arts London, the artists were given time, funding and support to develop significant works for the exhibition.

In Shaun Badham’s insightful review Precarious, he studies three works in the Biennale that conveyed a feeling of precariousness he sensed in the location, context and art in Venice. This included work in the Tunisia Pavilion, titled ‘The Absense of Paths’, the country’s first national pavilion since 1958. Badham writes: “This project has migration and the re-evaluation of our collective humanity at its heart… while doing so offering a symbol of utopia.” We bumped into each other in Venice shortly after getting our ‘Freesa’ (Universal Travel Document) from the pavilion, and both expressed how having the document was particularly uplifting and freeing in the context of Brexit. 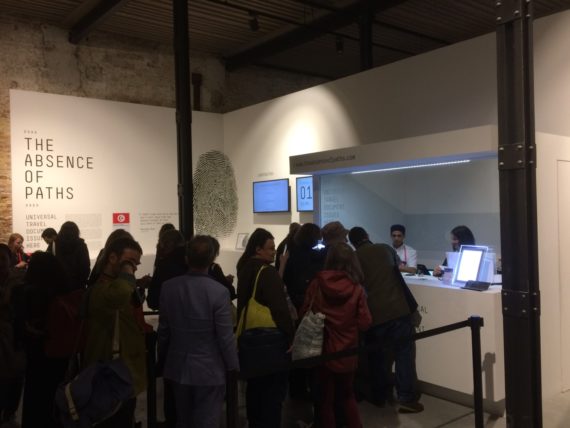 Christine Macel, curator of the Biennale’s International Exhibition, ‘Viva Arte Viva’ in the Arsenale and Giardini, has stated that the exhibition is “inspired by humanism”. Recognising this humanity, Margherita Gramegna highlights works in the exhibition that caught her attention, expressing the hope that her Venice research will feed into the development of the 51zero.org festival.

In her detailed, informative review My Venice Biennale experience, Gramegna says she was particularly inspired by Taus Makhacheva’s film, Tightrope: “Beautifully shot, the piece comments on invisible heritage and museums, storing work that is never exhibited. It is also metaphorical of the artist’s daily fears and struggle and could be read as a vaguely sardonic response to the Biennale curator [Christine] Macel’s call to celebrate artists and their ways of life, visually translating the uncertainties artists encounter in creating work, the precarity and the strain of balancing practice with duties and obligations.”

The Biennale artists must feel overwhelmed with these duties and obligations when they first learn of their responsibility to create an exhibition for the Venice. Certainly Phyllida Barlow, in her opening speech at the British Pavilion, expressed how she was devastated by Trump and Brexit and overwhelmed at the time she was asked. But, on arriving at the Giardini for the installation of ‘Folly’ and connecting with the other artists at the Biennale, she felt a camaraderie and unity of purpose in representing the country with her solo work. 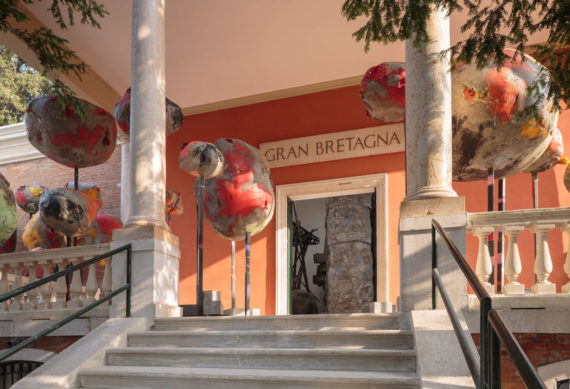 Jamie Fitzpatrick in his thoughtful review of Finnish presentation The Aalto Natives questions the idea of a national pavilion and identity in a Biennale context. Fitzpatrick writes: “a collaboration between the artists Nathaniel Mellors and Erkka Nissinen, [the work] focuses on the clichés of nationhood, through origin myths, history and national identity. Not only is the representationally itinerant building a suitable context for this video installation, but the collaboration, involving the Finnish Nissinen and the British Mellors, offers both a simultaneous inside and outside perspective on, in this case, cultural identity.”

A delightful part of the Venice experience was connecting a-n’s AIR Council members with the bursary recipients to see openings, go to the pavilion parties and meet up for a post day-of-art Aperol Spritz and debrief. (I don’t actually think you’re allowed to write about Venice without mentioning Spritz).

It felt social and less exclusive to be part of a larger cohort, so even though you were going around exhibitions on your own most of the time, you could connect and discuss the experience together at lunch or in the evenings. Art people were friendly and approachable in Venice – they seemed to relax and let their guard down – so it felt easy striking up conversations which in a UK context would be unimaginable, unless you are very bold.

Bursary recipient Kathryn Fry managed to attend many parties, although after “seven days of breakfast, brunches, aperitifs, and after-parties in a never-ending parmesan and prosecco pit, I came away feeling exhausted and soul-weary”. She also felt that “the curated exhibitions in the Giardini and Arsenale did not live up to Macel’s noble claims.”

There was a lot of work to be seen outside the main Biennale and you can get a feel for this through the blog of Philippe Handford and review of Margherita Gramegna. Handford gives us a walking tour through the packed three days he was there. He managed to catch Rachel Maclean’s Spite your Face in the stunningly excessive Scottish Pavilion, “a film in a church north of the city. Spite Your Face references the story of Pinocchio but with a more sinister tale of contemporary political rhetoric and the morality of our commercial world.” 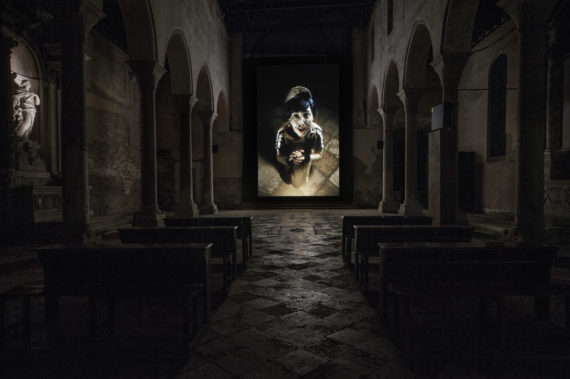 Emily Sparkes interviews Maclean and the artist opens up about her inspiration, which centres on the political and cultural present day: “I was interested in narratives used by politicians and national narratives, and the ways in which with Brexit and Trump and other situations, when there’s a powerful narrative, and you lie to substantiate that narrative, disproving those lies doesn’t necessarily affect the power of the narrative itself. I was interested in playing with this rags to riches narrative which I think is in so much of our culture, and this Britain’s Got Talent-style vision of success.”

Looking back on it, the cohesion of the curatorial themes of humanity acted as a starting point for the work throughout the Venice Biennale. There was criticism by some about a lack of diversity but I didn’t feel that because of the majority of countries in the world were being represented somewhere in the Biennale, and New Zealand and Australia were both represented by artists with native heritage. It is possibly the art glitterati, curators and buyers that don’t represent the diversity that we would like to see.

Kaori Homma has spent a lot of time thinking on politics, social engagement and the role of the artist in her a-n blog: “I experienced a sense of déjà vu. I had seen something similar in the post-Fukushima nuclear disaster of 2011 in Japan, where a seismic shift in view of political issues had occurred. The same feeling of powerlessness and hopefulness in relation to art’s role could be seen then, which catapulted some artists into action, raising their political concerns through their practices.” 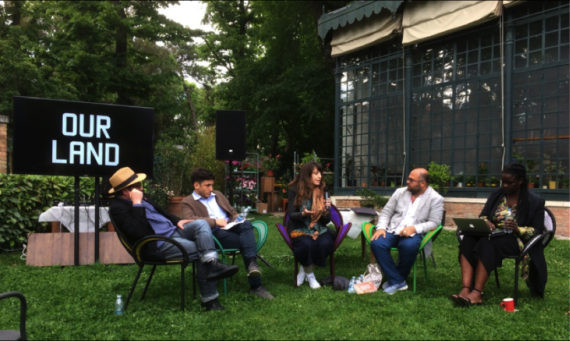 The references throughout the Biennale on how we live and exist in our countries, how immigration and migration affects us, and what makes us human were discussed in an offsite event ‘Art in precarious times: A discussion of the implications of the global rightward shift on creative practices.’ Shaun Badham attended this event, writing: “The panel reflected on the current political situation and the implications of the global shift to the right, for creative practices and collective futures. This initial dialogue felt like a presupposition that I could not shake throughout my time at the festival.”

Attending Venice does affect your creative practice in many ways. In particular, the story of Khadija Saye has now left an eternal mark on the Biennale and on all the people who were touched by her work and story – a powerful story of our collective humanity.