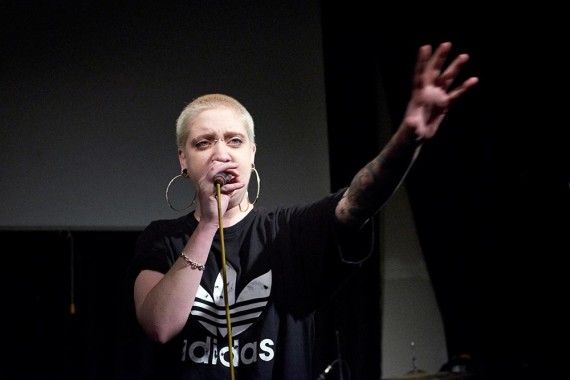 The artist and activist Liv Wynter has resigned her role as artist in residence at Tate over its response to sexual harassment in the art world and what she sees as the organisation’s unsatisfactory approach to diversity.

In a resignation letter posted on her website, Wynter – who was one of four workshop artists along with Raju Rage, Xana and Yemi Awosile – stressed that she had no issue with Tate’s school and Teachers team, who she said “are doing transformative and phenomenal work”.

Highlighting what she described as the “invisible inequalities” at Tate, Wynter, who in her artist statement describes herself as ‘a queer working class female artist’, said that “the whole time I am part of the Tate’s institutional mechanisms, I am not being treated with dignity or respect”.

In an interview last month with The Times, Balshaw said in relation to sexual harassment: “I personally have never suffered any such issues. Then, I wouldn’t. I was raised to be a confident woman who, when I encountered harassment, would say: ‘Please don’t’ … or something rather more direct.”

Slap in the face

Wynter said in the letter that Balshaw’s comments were a “a huge slap in the face”, adding: “I cannot describe to you the personal shame I feel as a survivor of domestic violence, to work for someone who could think so little of me whilst simultaneously profiting off of my ‘survivorness’ and the work I dare to make about it.”

Following a post about her comments on the notsurprised2018 Instagram, Balshaw apologised on an Instagram thread, saying: “I am sorry if this has been misunderstood. It is absolutely not my intention to say that women are in any way to blame. To be clear, it is the perpetrators who are responsible for their behaviour and not the women who are subjected to it.”

However, Wynter’s resignation letter claims that during a recent public meeting at Tate Modern, Balshaw was “still completely unable to take ownership of anything but self proclaimed ‘ignorance’… Maria seemed to have no accountability, and used ignorance as a weapon to rid her of all sins”.

Balshaw’s original sexual harassment comments came following the news that Tate had suspended contact with one of its largest donors, Anthony d’Offay, after it emerged that he was facing allegations of sexual harassment and inappropriate behaviour made by three women. D’Offay denies the claims.

In her resignation letter, Wynter also takes issue with separate comments by Balshaw in which she explained to an audience how she had been pleased to see a photograph of a group of young men at a gallery watching a video installation by the black artist Steve McQueen and “eating their fried chicken lunch”.

Wynter said: “If she wishes to wear this apparent racial and sexist ignorance as a badge, I am forced to question, how did she become appointed to the role? How can anyone so proudly ignorant be the head of the UK’s largest cultural institution?”

Wynter also took issue with Tate’s work with “radical, queer, black, brown, trans, working class, and other marginalised identities” stating that this looked like “a distraction technique” as it was not reflected in the make up of the organisation itself.

She also stated that Balshaw and Tate should donate “time, money and space” to organisations working against racism and sexism such as IMKAAN and Sisters Uncut, adding: “Tate must be ahead of the curve, and not rely on marginalised communities to drag it kicking and screaming into the present.”

A statement issued by Tate in response to Wynter’s letter said that Balshaw had already responded to criticism of The Times quote in her Instagram post, and that she had also apologised “during an open discussion with staff and restated her commitment to inclusivity and diversity, which staff support”.

Balshaw commented: “Throughout my career I have been dedicated to addressing issues of gender, race and equality and I apologise if my recent comments have offended anyone.

“When I became Director of Tate, I set out my vision to make this the most culturally inclusive museum organisation in the world, and I am truly committed to that vision. I have spoken publicly about my values on many occasions over the years and I will continue to argue for equality and inclusion at every opportunity.”