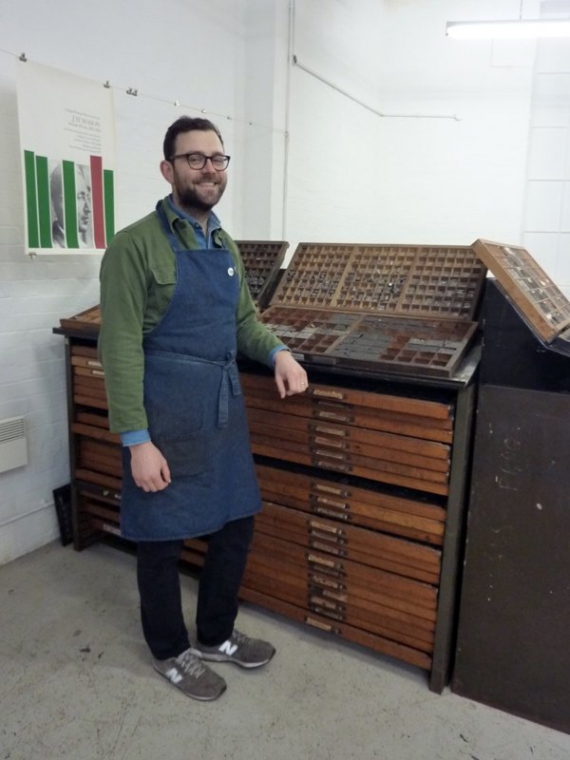 “The digital thing doesn’t bother me,” says Simon Goode, artist and founder of the new London Centre for Book Arts. “To me, it’s exciting rather than something to worry about – have you seen the Espresso Book Machine?”

Book art is a difficult genre to define, especially since the advent of digital technologies and online distribution processes have radically changed artists’ approaches to production. Although Goode’s own practice is heavily informed by classical letterpress and printmaking techniques, he doesn’t want to be pigeonholed as too traditional. For him, book arts is about more than just the artefact – it’s about ideas, distribution, information, in whatever forms these may take. “It makes for a very democratic process,” he says. “Anyone can make a book!”

That said, it is with a firm basis in craft skills and with a commitment to rare and specialist equipment that Goode is setting up the new centre, the first of its kind in the UK. His impressive collection of print presses and binding machines includes a US-manufactured Vandercook test press (1961), a FAG proofing press from Switzerland (1968) and an antique Frederick Ullmer guillotine named Ted, after its previous owner the poet Ted Hughes. There is only one technician living in the UK who can service these machines and he’s in his 80s – an indication of just how real the threat is to the survival of this art form.

While there are some Book Art degree courses in the UK and several hubs of expertise around the country – including the Centre for Fine Print Research at UWE and the bookRoom Research Cluster at UCA Farnham – Goode felt something was missing: a space for people to practise the art of book making. Crucially, what was needed was somewhere to take part in the process, to learn and hone skills – a place for book arts graduates to sustain and develop their practice once they’d left college.

In 2011 Goode made a research trip across America from New York to LA, via Chicago, Minneapolis, Portland and San Francisco. There is a thriving book arts culture in the US, and far greater support and provision for book arts practitioners than on this side of the pond.

“The New York Center for Book Arts was founded way back in 1974 – at that time in the UK skills like typesetting were taught through apprenticeship schemes, they weren’t considered an art form in their own right,” explains Goode. “The college system in America created an environment that had a more holistic approach. They’ve really got it right over there.”

Previous attempts have been made in London to establish book arts centres, but they haven’t lasted. So what will Goode do differently this time?

“We’re looking to the US model. Rather than an artists’ co-op or an extension of an individual’s studio practice, this will be more like a community centre – with courses and access to facilities that are open to everyone and anyone. And I want to find ways to keep things as affordable as possible – I don’t want the costs to be prohibitive in any way.”

Over the past three months, Goode has been lucky enough to have rent-free access to his 365-square metre former warehouse space in Fish Island, Bow. This ‘test phase’ has allowed him to set up equipment, begin running workshops, establish a Friends’ membership scheme and make a start on his web presence and marketing.

“Ideally I’d like the centre to become self-sustaining through the membership programme, with regular workshops in core subjects and an annual events programme for artists,” Goode says. He also has plans for an exhibitions area to display book works from his collection and a reference library, which will be open to all. His aim is to see 2,000 people through the door in the centre’s first year.

So far, things are going well. Autumn 2012 courses all sold out, the centre’s Facebook community is growing fast and events and workshops are being added to the programme almost daily. Goode’s own passion and enthusiasm for the project is infectious: “I’m sure it’ll work out!” he says.

Bookish commission – in 2011 artist Emily Speed was commissioned by a-n to curate a special collection of artists’ books, which included Simon Goode’s The Sun Did Shine Here

David Miles: Forest (2008) reviewed by Nancy Campbell – “Miles works extensively with paper, creating mobiles and cut-card works, and so an artist’s book is an almost inevitable development in his practice…”