Manchester's new art space: "It will respond to the needs of artists" - a-n The Artists Information Company 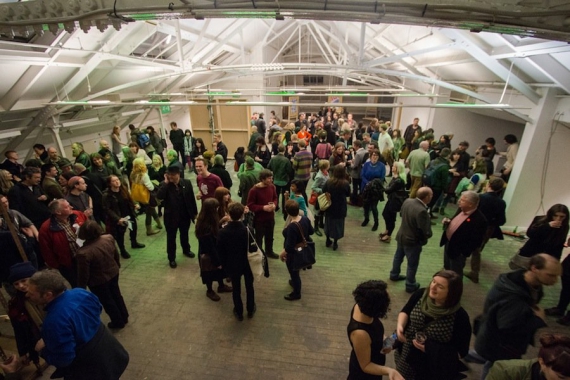 As Manchester’s Castlefield Gallery celebrates its 30th anniversary, it is launching its most ambitious initiative yet for artists, artist groups and development agencies. Federation House, an eight-storey building near Corporation Street in Manchester city centre, was until recently the headquarters of the Co-Operative Group’s food business, but along with other office workers in the area, its workforce recently migrated to the brand new Angel Square complex nearby.

For the next five years, Federation House will be home to Castlefield’s new ‘pop up’ project spaces, putting new art at the heart of NOMA, the Co-Op’s redevelopment scheme for the 20 acre area, a stone’s throw from Victoria Station.

On the day New Art Spaces Federation House was launched last week, visitors had a chance to tour 80,000 square feet of floor space, meet artists, and find out what it’s like to work there. The building is already busy with activity. On the upper ground floor, Lauren Sagar and Sharon Campbell have set up their glowing Chandelier of Lost Earrings, a floor-standing, glittering artwork made of jewellery donated by staff and patients at St Mary’s Hospital maternity unit.

“We got over 3,000 items – necklaces, bracelets and watches,” explains Sagar. “We even got a urine sample bottle with earrings in it, and there are lots of stories about children, because the project started at a maternity hospital – it involved lots of generations of women.” Funded by Arts Council England, they’ve just received the backing to take the chandelier on tour, beginning at Townley Hall Art Gallery, Burnley, from April 5.

Federation House isn’t Castlefield Gallery’s first venture into space-provision for artists – they already administer others nearby, in Leigh, Widnes and Salford. To get involved, artists, curators and writers joining the CG Associates scheme – costing £60 per year and currently over 100-strong – receive help in marketing training, attend writers’ workshops and networking meetings, and can apply for a short-term space lasting between one and six months.

Significantly, spaces in Federation House are not studios, as Castlefield director, Kwong Lee, points out. “We work with quite a lot of artists in studio spaces in Manchester; they serve their purpose, they’re cheap, but usually they’re quite cold and the roof is sometimes leaky. What we bring here is time-limited space, so if an artist who has a studio already or works from home has an ambitious project, and for two months they need half a floor – which is 500 square metres – they can have that. So we issue licences to artists – it’s not a tenancy agreement – it’s a license to use. That’s why it’s short-term. It needs to be active.”

The size of Federation House’s floors – lit by ample window illumination – allows for some sizeable work to go on show. This currently includes a vast installation on the fourth floor, by recent graduates of Salford University, Rafael Perez and Charma Force. Entitled Find What You Love and Let It Kill You – lines taken from a poem by Charles Bukowski – it is made from 1,300 plaster casts of balloons, laid out upside down, like giant, pale flowers, on the wooden floorboards. “It’s a great space,” says Perez, “much better than a white cube.”

Downstairs on the first floor, there’s a big, characteristically twisting and spindly abstract construction by Nicola Ellis, one of four North West artists supported by development production organisation, Mark Devereux Projects, which according to Devereux himself, “aims to open up spaces like this nationwide.”

Something unique for Manchester

For Manchester, Federation House is offering something unique, believes Castlefield’s director. “We want people to say, I’m going to set that two months aside, or six months aside or one month aside, and do something that I can’t normally do elsewhere,” he says. “But we want it to be a moveable thing, so that we can always respond to the needs of artists. We’ve seen a lot of that in Manchester, where you just can’t find a space.”

Pool Arts is one organisation exemplifying that need. For 10 years the charity has provided support and facilities for artists with mental health issues, and over 45 artists have benefitted from their help. But recently they lost their building. Now they’re in Federation House, about to launch an exhibition based on artists’ responses to documentary research, called Furiously Mad: 300 Years of Legal Insanity. It will be at the People’s History Museum from 2 April.

By contrast, upstairs on the top floor there’s a space called TOAST, set up by Adam Renshaw and a group of artist-curators formerly known as the Lionel Dobie Project. Visitors on the opening night were able to climb a wooden viewing platform, The House that Toast Built, and received a free soundtrack CD by Mike Nowacki. It would be an understatement to say that Federation House contains a great deal of variety in its choice of artists.

“The other thing to say is it’s not just visual arts-led,” Lee adds. “It’s not mono-culture. Most of the other studios, apart from Islington Mill maybe, are mono-cultural, and we want to create a visual arts-led culture which has other art forms, and they’ll be cross-trading.”

To this effect, Federation House has given over one of its floors to Filmonik – a filmmaking group – and the lower ground floor, which formerly housed the Co-Op’s archives, is now occupied by theatre experimentalists Manchester Artistic Research Studios (MARS), whose artistic director Benji Reid has co-opted the Co-Op’s old shelving units for use as a makeshift stage.

“It’s making the best of the city, of networks, of artists,” said Alison Clark-Jenkins, Arts Council England director in the North West, during a speech on the opening night. “But this isn’t a tick-box exercise, this isn’t the way this building feels, there’s a bit of magic here, I think.” Federation House could provide what is desperately needed in the city – facilities, support, critical mass and some “magic” to persuade more art graduates and emerging artists not to leave Manchester in search of a career.

Hotel Elephant: a platform for artists to exhibit and sell in their neighbourhood

The Nomadic Studio: “Complexity is a good thing, or at least a reality”

Search under the artist_led Tag