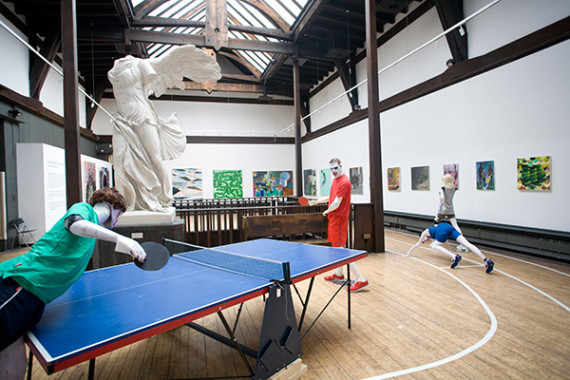 The latest edition of the Marmite Prize for Painting is taking a novel approach that questions the notion of the ‘expert judge’.

For its fifth edition the prize’s organisers have put out an open call, seeking suggestions for three painters based in the UK and Ireland to join last year’s winner Brian Cheeswright in selecting the winners of the 2016 prize.

Co-curator Marcus Cope said: “I wanted to open the choice [of who judges the prize] up to the painters who are going to enter. I’m interested in finding out which painters are admired and respected by the painting community at the moment.”

Cope said he was fed up of seeing the same names cropping up on judging panels. “There seems to be a handful of names that reappear in these roles… I don’t want to dictate who is up there – I want the choice to be the painters’ choice.”

Cope added that whether he liked the suggestions or not wasn’t important. “I want to shake things up a bit, and to keep things fluid so that they don’t get stale.”

Already some familiar names have been cropping up, with over 300 suggestions already received. “One thing I have noticed is that the majority of the suggestions have been for a small group of female painters,” said Cope. “Interestingly though, they represent quite different genres of painting… you’d be very unlikely to see them together in a group show.”

The deadline for suggestions is Friday 22 January, and the three painters with the most votes will be invited to participate as judges. “I’m keeping fingers crossed that they will be up for joining Marmite Prize IV winner Brian Cheeswright on the panel.”

The Marmite Prize for Painting was set up in 2006, with subsequent prizes running in 2008, 2010/11 and 2012/13. The aim of the prize is to promote artist communities and networks, locally and nationally, connecting artists through the touring exhibition and related activities.

The 2016 prize will be hosted by Block 336 in Brixton and Highlanes Gallery, Drogheda, Ireland. Past winners of the prize include Iain Andrews, Dai Roberts and Michele Fletcher.

Send your suggestions to [email protected] by 22nd January, 2016 or tweet @MarmitePrize using #marmitejudge. An announcement is due on 1 February 2016

Open exhibitions and entry fees: price worth paying or license to exploit artists?