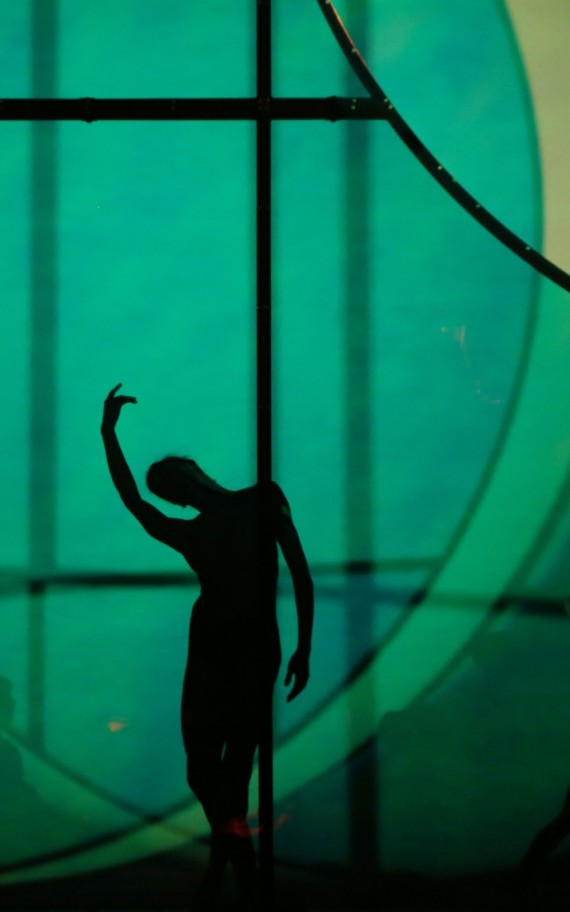 It opens with lights in darkness, worn on the bodies of dancers, moving and connecting like molecular structures. And on one level Tree of Codes is all about light.

For Tree of Codes, McGregor’s collaborators are composer Jamie XX and artist Olafur Eliasson, whose visual concept in some ways recalls his popular giant sun, The Weather Project, that dominated Tate Modern’s Turbine Hall in 2003.

Eliasson’s inventive use of screens pierced by giant, circular and semi-circular doors also mimics the opening pages of a book, deliberately echoing the physical originality of Jonathan Safran Foer’s book/artefact, Tree of Codes, itself a ‘scissored’ version of Bruno Schulz’s story-cycle, The Street of Crocodiles, first published in 1934.

Around and through these screens, 15 dancers from Paris Opera Ballet and Company Wayne McGregor move in relational, interchanging human sculptures, sometimes transforming their bodies with extreme rapidity, and during one sequence, extreme slow-motion. The effect is mesmerising.

The use of a giant mirror at the back of the set adds another vital element to the experience: the audience can see itself throughout most of the performance, and the physical presence of the audience is constantly being explored by slow-tracking spotlights.

The screens and doors, changing colour, sometimes mirrored, sometimes transparent, all appear to be floating in the middle of a giant arena, in which the audience are the most static part. The dancers, both en masse and in their many and various solo and group tableaux, constantly unfolding, inventing and reinventing themselves, are human abstract art.

And, judging from the explosion of applause at the end of last night’s world premiere, this powerful example of a Gesamtkunstwerk, or all-embracing total artwork, occupied the centre of everyone’s imagination, for all of its 75 minutes duration.

Tree of Codes continues at the Opera House, Manchester until 10 July 2015. www.mif.co.uk/event/tree-of-codes