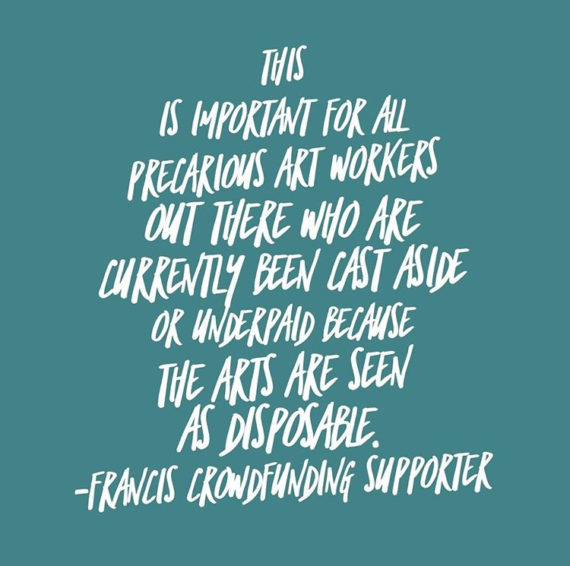 27 educators and artists who are seeking recognition as employees rather than freelancers following their alleged sacking from the National Gallery are half way towards raising £65,000 to pay the legal costs of an employment tribunal.

The group, whose roles involved welcoming school tours and members of the public, and giving talks and workshops, have so far raised just over £32,000 via a crowdfunding campaign, with five days left to go.

The group are claiming unfair dismissal, citing age and sex discrimination, and saying they are entitled to retrospective holiday pay. They are also claiming that they have been replaced by a ‘small number of in-house educator roles on greatly reduced salary and terms, to which we do not consent’.

Following a preliminary hearing on 16 July, their eight-day hearing will start on 26 November 2018.

As a way of saying thank you to the 998 supporters who have already pledged money, the group has announced that it will run a free drawing event this week in London. It will involve participants producing small, postcard-sized, observational studies during a walk from Churchill’s War Rooms Museum to St James Park.

In a statement on their Instagram page, the group said: “Reading words of support on our crowdfunding page really does make all the difference. Thank you! It’s also why we are trying to give something back.”

I can’t think of a greater privilege than getting to share ideas about works of art – which are really ideas about life itself – with children and adults of all ages. It is truly a thrilling experience to see works of art come to life through conversation, observation, and creative thinking. Everyone should have the benefit of that. Ben Street, 12 years at the National Gallery To find out more about our campaign please visit our crowdfunding page-link in bio: https://www.crowdjustice.com/case/nationalgalleryeducators/ #standwithNG27 #employmentrights #artseducation #artseducationmatters #museumeducation #museumed #education #workersrights #gigeconomy #arthistory #museumlife #drawwithus #parklife

The group believe their current situation is indicative of a wider issue relating to self-employment in the arts. They said: “This is a topical area of law: it is a new public body case in the wake of private sector employment disputes against employers such as Uber, Deliveroo, Pimlico Plumbers and Hermes.

“The National Gallery is a non-departmental public body of the Department for Digital, Culture, Media and Sport. We have reason to believe the Gallery has made deliberate attempts over several years to evade awarding us fair employment status.”

Responding to the group’s claims, The National Gallery told The Guardian that the “entire group were consulted for their views together and individually over the change for a period of three months between October 2017 and January 2018. These jobs were offered to all of our existing freelance service providers last year. We still have vacancies which are available, although unfortunately not all of the group have expressed an interest in these.

The gallery added that it believed “we have acted both lawfully and fairly in changing our service provision to one of secure employment”.

Tickets for On Reflection – Draw With Us are available at www.eventbrite.com

More information on the National Gallery Educators’ crowdfunding campaign can be found here at www.crowdjustice.com/case/nationalgalleryeducators. The deadline for contributions is 14 August 2018