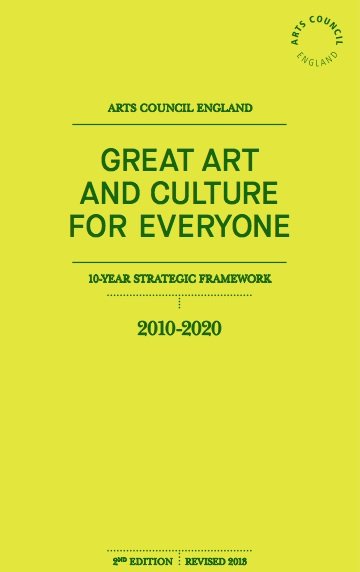 Great Art and Culture For Everyone, the refreshed 10-year ‘strategic framework’ from Arts Council England (ACE), is presented in a simple imageless design. There are no photos of dancers, plays, sculptures or musicians making great art or of audiences enjoying it. The only things to break up the text are, unfortunately, the same mainly vapid bromides from the great and the good as used three years ago. (‘Makes life worth living’ – really, that’s the final words of a key cultural policy document in such turbulent times? Really? Worth using again?)

The design suggests something for the cultural sector to digest soberly and seriously rather than to inspire any wider public about ACE’s mission-on-the-tax-payers’-behalf. It reminds me of nothing so much as that ubiquitous Keep Calm and Carry On design. This may perhaps be the intention, as that is roughly the message, three years on from the original 10-year vision.

The main difference between this ‘yellow book’ and ‘the pink book’ of 2010 is a widening of cultural remit: formal incorporation of museums, libraries and collections particularly, but also more mentions of rock and folk than Lord Goodman might have imagined possible. (To be clear: I think both these are Good Things.)

There are no dramatic changes in ACE’s ambitions and priorities – these remain about inspiration, transformation and possibility – but there is evolution. The five goals of the framework have not changed in their essence, remaining about increasing excellence, access, sectoral resilience, workforce diversity and ensuring children and young people participate in arts and culture.

This continuity is to be welcomed – there is more than enough change around to handle. The goals to be addressed in the upcoming National Portfolio application process are known and familiar, if not yet the size and shape of the actual goalposts. (It won’t be badgers that move those goalposts, by the way, it’ll be unicorns, who get a rather bizarre – and brave – mention in ACE Chief Executive Alan Davey’s introduction.)

What museums, libraries and collections add to the previous footprint is breadth. Connecting galleries to museums in ways which reflect audiences more, reintroducing the notion of libraries as cultural centres – especially powerful given the emphasis on digital – and offering new ways to connect with children and young people, are some opportunities identified.

Local authority funding cuts hang over this strategic framework. The ability to have a ‘single conversation’ with local government across the arts, museums and libraries is seen as a major opportunity to build partnerships and collaborations. Artists and organisations would be well-advised to consider how they get involved in those conversations.

That they will be doing this locally, rather than regionally, is clear. Despite Peter Bazelgette’s somewhat blustery response to the Rebalancing Our Cultural Capital report on funding patterns, there is little here to suggest that the spread of investment across England is a core strategic concern for the Arts Council. (The word ‘region’ appears precisely never, ‘regional’ just five times. ‘Local’ is more common, however, reflecting government policy.)

It’s worth considering what’s not here, or not in the way one might have imagined.

The potential interrelation between arts, museums, libraries and the creative industries is underplayed, a result of the emphasis on ‘great art and culture’. This may have implications for artist-led initiatives such as studios and market development, and indicates an ongoing gap in ACE thinking.

Although the centrality of artists is recognised, and the difficulty of actually earning a living, few solutions are put forward, and there is a slightly resigned air to lines like ‘we will build upon the success of our internship guidance, while acknowledging the financial pressures on the sector and the scarcity of resources that organisations can face.’ A more urgent ingenuity and commitment are called for.

I would also like to have heard more about the learning from the last three years. What have been the challenges for ACE in working with the sector to achieve great art for everyone? What are their frustrations and questions? The Cultural Olympiad is seen as the great success of the last three years – what has been learnt from how that happened, and how will that learning be used? What is being learnt from Catalyst, given that private giving is still literally top of ACE’s list of ways to increase income, although we know 90% of that goes to London addresses, compounding local authority cuts outside of London?

This refreshed document was an opportunity to share the learning process with the sector – hopefully this will be done via other means, such as the research programme mentioned. ACE could, with AHRC and others, be a much more powerful resource for the sector, but only if it opens up even more, and is prepared to actively examine its experiences with others. (This, in turn, means the sector must give ACE a safe space to do this, and not castigate them for admitting ‘failures’.)

Finally, one potentially very significant thing for the future to which the sector should pay particular attention is the development of national quality measures, which the ACE website suggests will cover seven areas – from product to access via leadership and finances. The measures will encompass the views of audiences, users and peers and be used to inform funding agreements and ACE’s peer review programme. These will be important for artists and organisations to understand and engage with, and could have huge long-term implications.

So, keep calm, carry on – but be vigilant.

Download the pdf of Great Art and Culture for Everyone here.