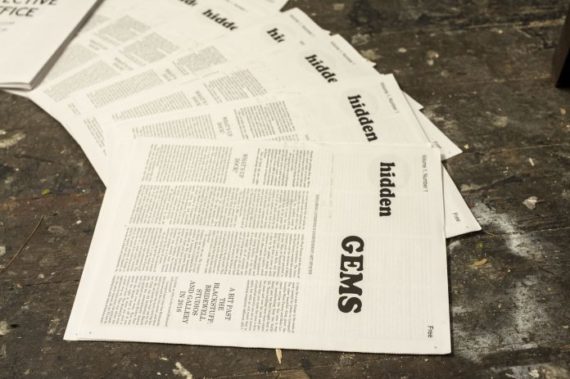 Liverpool’s lesser-known artist-led scene is set to be revealed by a new free newspaper put together by local artists, writers and graphic designers.

Hidden Gems, which is limited to 5000 copies, will be distributed at various venues across Liverpool over the next month. The aim of the project is to increase awareness of the city’s less high-profile art spaces and bring them to new audiences.

Explaining the importance of the project, artist and contributor Josie Jenkins comments: “When you’re part of the artistic community, you sometimes forget that most people don’t know about all these great places that exist in Liverpool.

“The idea was, if average folk saw the newspaper lying around in a coffee shop and started reading they would realise it didn’t use art jargon and was interesting and relevant to them. The newspaper is not written for people interested in art, it’s written for everyone.”

Although the publication will also be available online as a digital download, the emphasis is clearly on producing a high quality physical product.

“I wanted something real, that you can hold in your hand and want to pick up because it looks different from anything else you’ve seen. It’s the traditional idea of giving someone something that has taken time to make and asking for them, in return, to take time over reading it.”

Jenkins believes that something like this should have been done a long time ago. Does she feel like the venues featured in Hidden Gems are being overshadowed by higher profile art organisations in the city, such as Tate and FACT? 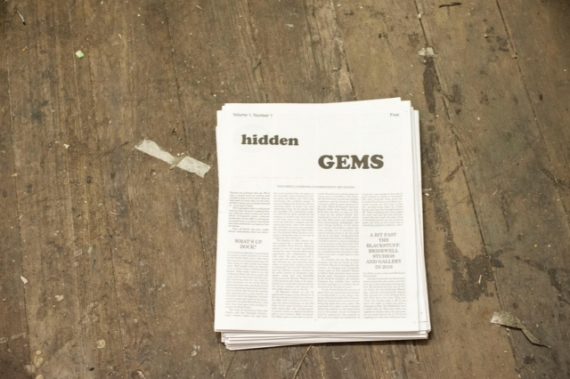 “That is exactly how I feel. At the same time, I don’t want to play down the importance of having these high-profile art organisations in Liverpool. There is a profound impact on artists living here, from the excitement that surrounds the big organisations to the ease at which we can access great contemporary and historic international art.”

Nevertheless, Jenkins does feel the negative side is that the smaller organisations are at risk of paling into insignificance in comparison. “They just don’t have the resources to compete with the big galleries and publicly-funded projects. The people operating these spaces do it voluntarily and being artists themselves, are trying to hold down a job that pays the bills, then managing a studio or gallery on top of that, and finally trying also to continue their own artistic practice.”

Is there any form of relationship between the high profile and artist-led spaces? “There’s a bit of a gulf, to say the least, but I can only speculate about why this might be. Many of the smaller spaces don’t want to have a strategic plan about how they should be viewed by the art world.

“They are more free about the way they do things and they really are experimental, in the true sense of the word. We use this term a lot in the art world, to throw a positive light on artistic practice, but true experiments result in highs and lows. But by not taking that risk, the high-profile organisations and media are missing a trick.”

Long term, the Hidden Gems team is keen to do more editions of the newspaper with each having a different focus. “For people who don’t often venture out to exhibitions and events by the smaller studios and galleries, maybe they will be convinced to look us up and find out more. We are hoping that the publication may also convince stakeholders in the art world to keep a closer eye on Liverpool’s smaller art spaces.”