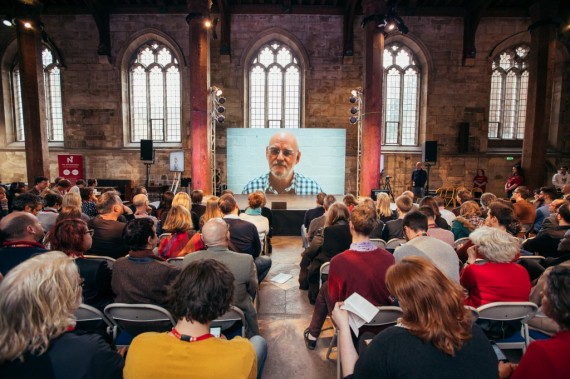 Writing on this site in November, 3 Johns and Shelagh stated: ‘…we know from experience that evidence doesn’t work’. They were reacting somewhat impatiently to the process of debate and research led by Arts Council England (ACE) and the RSA under the heading The State of the Arts, which culminated in the recent No Boundaries conference in York, Bristol and online. Their point was that, despite the seemingly relentless search for the killer fact and the unimpeachable case study, it’s politics that counts in the end.

Yet while on its own evidence won’t sway the voters or the people seeking power, how about combining cold facts with stirring leadership and political will? There was plenty of inspiration on hand from the No Boundaries speakers, most of whom were there to relate their own experiences rather than to report as disinterested observers. Their stories, of Nairobi being brought to a new sense of itself by a long and superbly programmed community festival, and of the people of Doncaster being won round to their own potential by the work of Cast, were captivating. We all wanted to be as good at our jobs as Joy Mboya and Kully Thiarai clearly are at theirs.

The story we were engaged in was, in a way, that of the arts as a corporate entity, with ACE as its head. This is hardly surprising, since virtually everyone attending owed at least a tithe of their salary to an ACE grant. Like previous State of the Arts conferences, for all that its audience is a global one, No Boundaries is the Annual General Meeting of the arts, and the rallying cry of its leaders is what we expect to go away with ringing in our ears.

Two major presentations by ACE itself took place away from the online ‘Shift Happens’ model. The first was a Q&A, led in York by Althea Efunshile, on ACE’s submission to the DCMS Select Committee Inquiry into ACE’s work, and whether the geographical distribution of its funding is fair, and the current weighting towards London justified.

This England: how Arts Council England uses its investment to shape a national cultural ecology, reminds us through its Shakespearian title that we should be grateful that we inhabit ‘this little world, This precious stone set in the silver sea’. With its environmental metaphor, it says ‘what a wonderful, rich natural habitat this is, interacting in incredibly complex ways that we interfere with at our peril’. This underplays not just the effect that funding has, but also the role of rational planning in creating a successful cultural economy.

This is a very English habit. Richard Wilding evoked the same sentiment when he defended his 1989 review of the arts funding system by quoting Maynard Keynes, who likened the arts to the wind that ‘bloweth where it listeth’. While feeling ‘uncomfortable’ about the imbalance of expenditure his analysis revealed, Wilding undermined the purpose of local arts planning and, through the abolition of the Regional Arts Associations, removed its most effective remedy.

At present, while audience development plans are all around us at every level, cultural development plans giving expression to democratic wishes are, with every passing month, losing the professional infrastructure that planning could provide. How can we will the desired end – a diverse, and therefore healthier, sustainable and yes, more exciting culture – but so patently fail to put in place the means?

In This England, ACE argues it should be judged on its achievements in the future and not on the acknowledged inequities of the past. How though, can we best explain such a long history of failed attempts to overcome the centralising forces of public arts subsidy?

Maynard Keynes himself spoke of ‘decentralising’ both the effects and the means to support the arts. The Glory of the Garden report in 1984 initiated a phase of ‘devolution’, and a subsequent round of more integrated national planning led to ‘delegation’. It is tempting to see the emphasis on the digital distribution of work by national companies as just the latest substitute for the distribution of what really matters – the power to decide how our taxes and Lottery income are spent.

In York we rose early to attend the breakfast presentation and launch, by ACE Chair Peter Bazalgette, of a substantial new chunk of armour, The Wider Benefits of Art and Culture to Society: a Review of Research and Literature. The report consists of 90 of the hardest bullets that cultural research, in ACE’s opinion, can provide, with which Bazalgette and others in the front line hope finally to rout the enemy – also known as the Treasury and others who express doubts about the effectiveness of arts spending.

Compared with the similar study carried out in preparation for ACE’s Great Art for Everyone, this survey does not attempt to cover research into community development, or what is sometimes called ‘placemaking’, or the impact that art has on art, although one of the most obvious things culture does is inspire and lead to new forms and expressions of culture. As in John O’Gaunt’s ‘blessed plot’, everything is in place already, nothing need be re-arranged, or started from scratch. Benefits are assumed to radiate out from these fixed points.

The themes of the research the report summarises are familiar territory: if we can show that funding the arts improves the nation’s performance in the economy, its health and well-being, its society and education, there is a ‘holistic’ case that the arts affect every aspect of all our lives. But what if the premise, that art has two sorts of benefits, intrinsic and extrinsic, is failing us? It is all too easy to equate intrinsic benefits with the reasons why we value the arts (and are probably heavily engaged in them) and extrinsic benefits with reasons why they ought to value the arts (even though they probably are not engaged).

The picture the research paints works at the level of what Eleonora Belfiore calls ‘defensive instrumentalism‘. As someone in the audience pointed out, it makes more sense to edit ‘wider’ out of the title since it implies there are also unspoken ‘narrow’ benefits, when generally we seek to praise the ‘universality’ of the arts. Belfiore tackles the historical roots of the supposedly universal and shows instrumentalism in both its forms to have been around, and evolving, for 2500 years, but we have forgotten how powerful positive instrumentalism can be. We have assumed that utilitarian arguments will have more rhetorical force in our neo-liberal political climate.

Yet we still recognise and admire the creative and political intent that, in 1405, led the authorities at York Minster to commission from glazier John Thornton a vast stained glass window depicting scenes from Revelation. This was not about improving health or education but organising belief. A ‘positive instrumentalist’ review of research would be bound to survey community and regional development research. It might also look outside England for robust research data, for example in Canada where the essential process of asset mapping is widely employed to support cultural policy.

The timing of No Boundaries could hardly be better. Instead of the last minute cut-and-paste of the ‘cultural policy’ section into party manifestoes, the fixed duration of Parliament means that there is time to work with all parties on the role of culture in the vision they are offering to the voter. ACE has asked to be judged by its actions on the matter of ‘rebalancing’ its support to the regions of England. There is a golden opportunity to embark on that action, both through cultural planning with local authorities and through influence on the plans of the winner of the 2015 election.

As DCMS projections of future Arts Lottery income make clear, there is also the resource, without detriment to London, to revive the partnerships with councils to develop and renew the cultural provision that we currently see being eroded. That would be a fitting way to mark the 50th anniversary year of Jennie Lee’s uncomplicated, avowedly decentralist but as yet unrealised White Paper, A Policy for the Arts.

Chris Bailey is a Director and Principal Consultant at &Co Cultural Marketing. He is Professor Emeritus in Cultural History at Leeds Metropolitan University and has for many years taught and carried out research into and for the cultural sector. www.andco.uk.com/