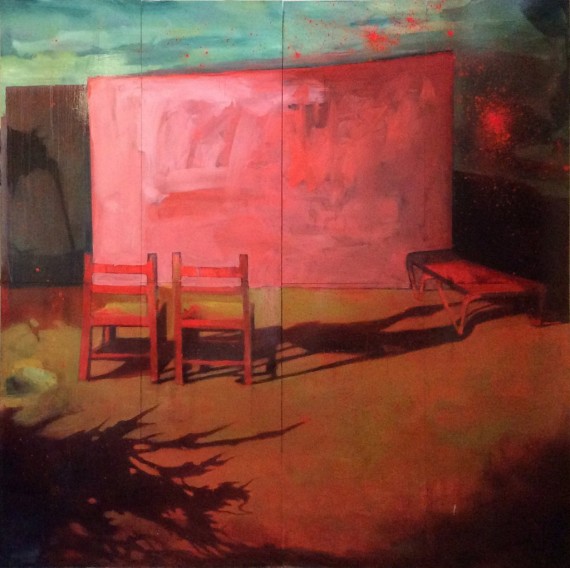 Lucinda Metcalfe, Bearspace, London
Exploring the over-saturation of images in contemporary society is common fodder for a number of artists, yet Metcalfe’s paintings offer something uniquely captivating. This is partly due to Bearspace’s usual high-quality curation which creates tension between two heavily contrasting works.
Until 21 June, www.bearspace.co.uk

Rachel Maclean, Happy & Glorious, CCA, Glasgow
This timely solo exhibition by Scottish artist Rachel Maclean explores national identity, and in particular Britishness, through three film works in which the artist plays all the characters. Included is A Whole New World, commissioned for the 2013 Margaret Tait Award, and a new split-screen film, Please, Sir…, which takes up the entire main gallery space at CCA. Part of the Scotland-wide GENERATION series, celebrating the last 25 years of Scottish art.
Until 13 July, www.cca-glasgow.com

New Wave, RBSA Gallery, Birmingham
New Wave is a showcase exhibition of seven emerging artists – Jack Foster, Hannah Honeywill, Sally Larke, Anna Lorenz, Jennifer Pardoe, Antonio Roberts and Mircea Tileaga. With a view to fostering critical engagement, lively debate and networking opportunities, the exhibitors have been encouraged to develop their professional experience by contributing to the range of activities and events involved in the creation of the exhibition. A selection panel of curators will also award one of the artists a £1,000 bursary at the end of the show.
Until 7 June www.rbsa.org.uk

Mathew Sawyer, Spacex, Exeter
Drawing, painting, sculpture, photography and music – Matthew Sawyer does it all. He describes his work as ‘documentary artworks’, where he makes connections with somewhat unknowing collaborators, including a local vegetable stall owner. The results are often humorous, but remain a poetic reflection on our daily lives.
Until 12 July, spacex.org.uk

Mondrian and his Studios, Tate Liverpool, Liverpool
Explore Piet Mondrian’s relationship with architecture and urbanism with this retrospective at Tate Liverpool that also coincides with the 70th anniversary of the artist’s death. Undoubtedly an exhibition highlight is the life-size reconstruction of his Paris studio, allowing visitors to immerse themselves in Mondrian’s creative world.
Until 5 October, www.tate.org.uk